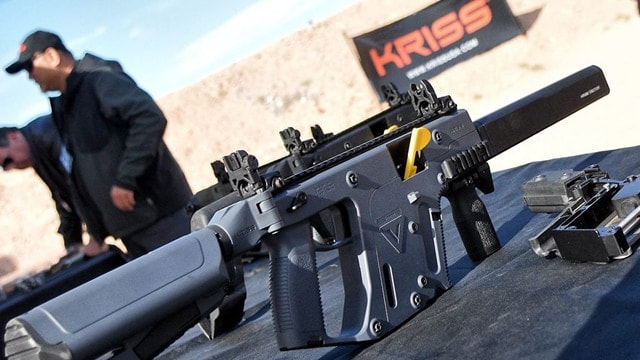 Kriss carbines ready for testing at a demonstration. (Photo: Kriss/Facebook)

Kriss Group SA sought bankruptcy protections for three of its subsidiaries in its home country of Switzerland, but the financial troubles overseas won’t affect the company’s U.S. operations, a company spokesman told Guns.com on Tuesday.

“The reorganization that is happening in Switzerland has no affect on us here in the U.S. as we are financially independent and operate independently of our Swiss sister companies,” said Tim Seargeant, marketing manager for Kriss USA, in an email.

Kriss Group’s corporate structure can get a bit confusing. Under Kriss Group is Sphinx Systems AG, Kriss International AG, Kriss Systems AG, which are all located in Switzerland, and the U.S. facility Kriss USA.

The Swiss operations were dependent on a $60 million contract with a foreign government, but the contract was cancelled and then the businesses were left unsustainable.

“(The companies) have experienced a progressive market reduction due to export regulation changes and foreign policy restrictions from Switzerland,” Seargeant said.

Financial troubles for the company have been ongoing, according to a Swiss media. Sphinx declared bankruptcy last November causing the other two companies under Kriss Group to enter a provisional debt restructuring moratorium, which ends June 29.

As for Kriss USA, which operates out of Virginia, the company has “experienced a strong and steady growth in the commercial market segment,” Seargeant said, adding that business activities previously managed in Switzerland will be centralized by Kriss USA.

According to the 2014 Firearms Manufacturing and Exporting Report by federal regulators, Kriss USA has manufactured more than 24,500 guns in the U.S. The majority of which — 22,301 handguns and 195 rifles — were exported out of the country.