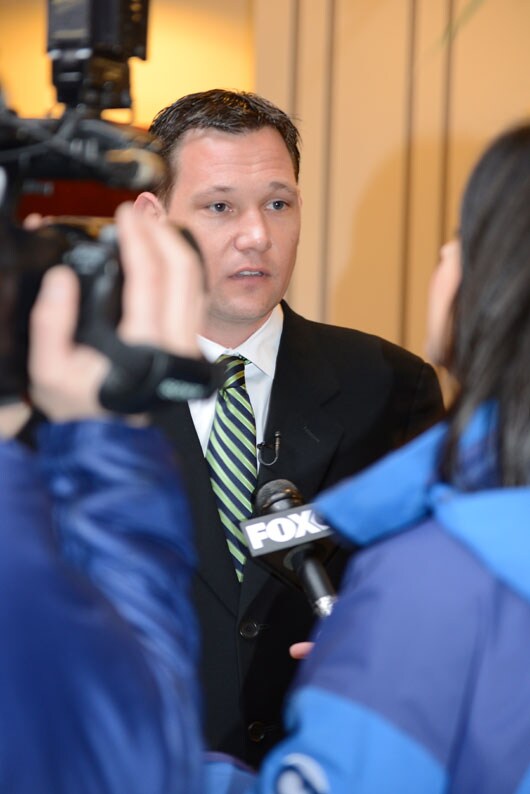 Mark Malkowski, former owner of Stag, talking to reporters at the Connecticut statehouse in 2013. (Photo: NSSF)

Closing a dark chapter for a New Britain gun maker, the former owner of Stag Arms was sentenced in a Hartford federal court Tuesday for the company’s violation of federal gun laws.

A federal judge sentenced Stag’s former owner and president Mark Malkowski to two years probation and to pay a $100,000 fine. As part of the resolution, Malkowski agreed never again to hold an ownership or management position with a firearms business.

Also, the judge ordered the New Britain gun maker to pay a $500,000 fine. Stag agreed not to challenge the license revocations and to drop all ownership claims to the firearms seized by federal regulators.

The district’s U.S. Attorney, Deirdre Daly, said in a statement Tuesday this is the first time that a major firearms manufacturer has been convicted of a felony and had its license revoked.

“Stag displayed a systemic and egregious disregard of federal firearms regulations. The company was unable to account for hundreds of semi-automatic rifles and possessed over 60 unregistered machine guns,” she said and added that gun makers act as the first line of defense by serializing firearms to ensure they’re traceable and do not fall into the wrong hands.

“This prosecution should serve as a warning to those in positions of leadership in the firearms manufacturing industry that failure to maintain strict compliance with firearms laws will have serious consequences,” she said.

Malkowski pleaded guilty in December to a felony charge of possession of an unregistered machine gun and a misdemeanor charge for failing to maintain proper records.

According to court documents, the criminal charges stem from civil allegations launched in September 2014 after federal regulators discovered unserialized lower receivers for both semi-auto and full-auto firearms inside Stag’s facilities during a routine inspection months before.

Company officials told inspectors that the items were not serialized because the person responsible for the task was on vacation. In response, inspectors issued a warning to the company and then returned a week later only to discover the lower receivers still unserialized. Agents with the Bureau of Alcohol, Tobacco, Firearms and Explosives seized 103 lower receivers, despite identifying 3,000 as unserialized, in May 2015.

The Justice Department said a receiver is the key regulated part that is considered a machine gun and that all other parts necessary to transform a receiver to a fully functional semi-automatic or automatic machine gun can be bought online.

After the items were seized, Stag said it had been working with regulators to resolve the issue. The company described the issues as relating to “timing and recordkeeping” and said it believed public safety was never compromised.

Stag gained notoriety in 2013 as a public voice for the gun industry amid a heated political debate. Malkowski urged state lawmakers to vote against strict gun control legislation proposed in response to the December 2012 shooting at Sandy Hook Elementary School in Newtown. For his effort, Malkowski was named “Business Person of the Year” in 2013 by the industry’s lobby, the National Shooting Sports Foundation. He founded Stag in 2003.

Malkowski divested his interest in Stag and the company was acquired by Miami capital investment firm White Wolf Capital, which holds a handful of other gun and gun related investments. During the transitioning period, the company said Malkowski would serve as a consultant.

Both Stag and White Wolf declined to comment on the legal matters, but Stag told Guns.com that it “looks forward to calling on Mark Malkowski from time to time for his valuable expertise.”

“When firearms licensees fail to comply with these federal regulations and laws they open the door for untraceable firearms to wind up on the street in the hands of traffickers and criminals,” said Daniel Kumor, special agent in charge at ATF’s Boston field office, in a statement issued Tuesday.

Under federal law, the possession of machine guns manufactured after 1986 is prohibited, and licensed manufacturers of machine guns are required to stamp a unique serial number on each machine gun and register it with ATF within one business day of manufacture, the Justice Department said.

“ATF relies on individuals and corporations who are licensed to manufacture firearms to mark them in accordance with the law, keep thorough records of the manufacture and disposition of all firearms, and maintain their inventory in secure facilities to prevent their theft or loss,” Kumor said.