Family wants to destroy 1,500 guns left behind by man who claimed to be spy 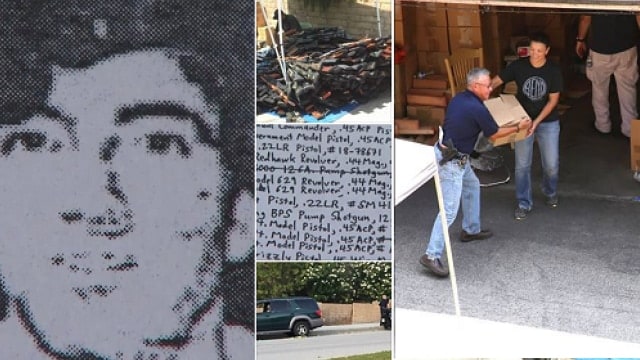 Jeffrey Alan Lash left behind a mystery and a lot of guns that are now the subject of a probate dispute between the woman who loved him for 17 years and estranged relatives (Photo: Composite)

Relatives of a mysterious California man who died leaving behind a huge cache of exotic vehicles and legal firearms want the “instruments of death” melted down or thrown in the ocean.

Jeffrey Alan Lash, 60, died last July 4 and told his fiancée, Catherine Nebron, a confusing tale of espionage and aliens that prompted her to leave his body inside one of his vehicles while she went out of town with friends. When she returned on July 17, he was still inside his SUV.

This prompted a call to authorities from her Nebron’s attorney, which in turn led to a massive effort by police to impound Lash’s personal collection of firearms – first estimated at 500 and now over 1,500 as well as 6.5 tons of ammunition – for safekeeping. Besides the munitions, which were all legally purchased, Lash left behind $230,000 in cash and a number of vehicles including a Toyota Land Cruiser set up to run underwater.

“They feel that if these guns find their way back into society, there’s a possibility somebody who shouldn’t have firearms might get their hands on them,” Brookman told the NY Daily News.

Nebron on the other hand, who had a 17-year relationship with Lash during which her he did undercover work for government entities, believes she is entitled to his estate and wants the guns– which includes several pre-ban models– sold.

“They can be sold through the Department of Justice and may be sold to police departments, but there is no point in destroying them,” Nebron’s lawyer Harland Braun told KABC.

The case, filing BP165266, will be heard by the Los Angeles County Probate Court on July 14.