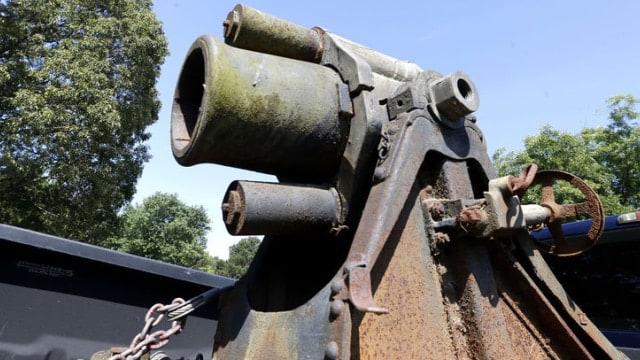 The device, designed to “werf minen,” was picked up by the Guard from a private residence and transported to the Bellwood military post for refurbishment. (Photo: Alexa Welch Edlund/Richmond.com)

A rare German artillery piece brought back from France after World War I by Virginia troops as a trophy only to go missing in the 1960s has been found.

The weapon, one of three minenwerfers brought back from Europe after the war, was captured or surrendered during the Meuse-Argonne Offensive in 1918 and sat in front of  the National Guard Armory and Health Center in Petersburg until the building was demolished and sold a half-century ago.

As noted by the Richmond Times-Dispatch, the trench mortar– what looks to be a 17 cm mittlerer Minenwerfer– ended up in the front yard of Felix and Winifred Vairo on Cox Road in Dinwiddie and sat there for decades according to neighbors. However, when auctioneer Tranzon Fox went to put the mortar up on the block as part of an estate sale on the property, the National Guard connection came to light.

After being contacted the state stepped in to recover their lost prize, with Maj. Gen. Timothy P. Williams, adjutant general of the Virginia National Guard, providing documentation of ownership.

The mortar will be restored and put on display at the National Guard’s Joint Force headquarters as a tribute to the Doughboys from the Commonwealth that went “Over There.”

It is not the first WWI German artillery piece to make the news in recent weeks. In Scotland, officials in one village found out their mystery “harpoon gun” on the town green was another rare 17 cm Minenwerfer while in California scrap metal thieves made off with a 77mm German field piece from a veteran’s hall and sold it to an unsuspecting collector for $1,200.