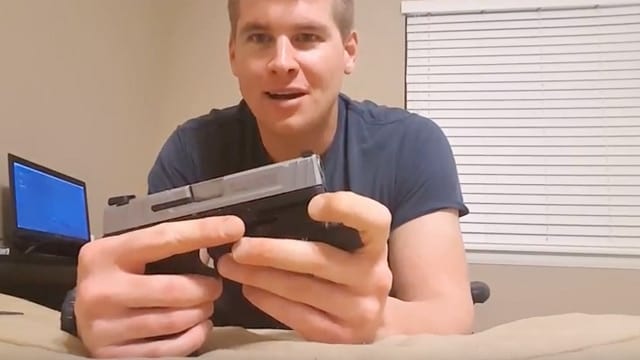 In what appears to be a slam dunk case for the investigators, a federal jury handed down a guilty verdict to the man who bought guns for felons after offering to do so in a Youtube video.

The jury convicted Kenneth Francis on all three counts related to buying guns for felons in a Denver federal court Wednesday.

During the trial, prosecutors presented a host of exhibits including audio, video and photographic evidence of Francis’s transaction and exchange with the prohibited buyer.

The ATF busted Francis in a sting operation in February after he posted a video titled “Need Help Getting A Gun?” to his Youtube channel, in which he outlined the exact illegal activities he was willing to do along with his contact information, as Guns.com previously reported.

“I’m getting sick and tired of all this crap that’s going on,” Francis said in the video, which was uploaded in December and has since been taken down.

“It’s really starting to piss me off, so if you have a felony or whatever, contact me,” he told his viewers.

Francis offered to get a gun for anyone with a state ID for just $50 and notes that it “is a very reasonable price because I’m basically going to be breaking the law here.” However, he said he’s okay with breaking the law “because the law is corrupt.” Nonetheless, an undercover ATF agent posing as a convicted felon took him up on the offer.

According to court documents, he went a Bass Pro Shop in Denver to buy a gun on Jan. 12 and when he filled out ATF Form 4473, he stated that he was the actual buyer of the gun when he wasn’t. He repeated the pattern on Jan. 22 at Sporstman Warehouse in Thorton, Colorado.

A sentencing hearing has been scheduled for Oct. 27. He faces up to 10 years in prison.