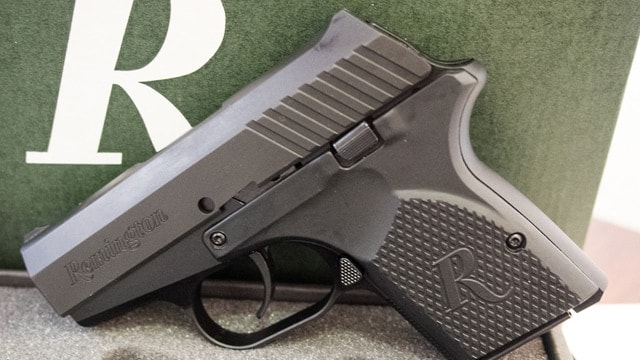 The Remington RM380 propped up against a box. (Photo: EDC Forums)

Remington Arms has been slow out the gate at producing handguns, but senior managers told investors last week that they’ve been eyeing the pistol market.

“The overall handgun market continues to experience strong growth … primarily in the polymer pistol, subcompact and micro pistol categories where we currently have limited product offerings,” said Jim Marcotuli, Remington’s chief executive officer, in his opening remarks during a conference call with investors.

He said the federal background check system, which serves as the barometer for gun sales, has shown a 20.8 percent increase from last year for handguns. While he did not specify whether or not Remington would be introducing new designs to compete in the market, he did explain the recent launch of a Remington self-defense pistol would set the tone for future launches.

“The RM380 has done well commercially and our successful launch will serve as a foundation process for future launches,” he said.

The company reported a lackluster second quarter despite steady demand for AR-style rifles. When asked about how handgun sales contributed to Remington’s balance sheets, Marcotuli gave a hopeful response.

“As far as a meaningful contribution, look, we’re gaining traction every time we launch a new handgun product, so we’re positioning ourselves into that market. Although we’re still a small player, so incrementally as a new product launch, it’s absolutely helping our overall performance,” he said.

Remington has two handgun series listed that fit the category for concealed carry that include the RM380 and the R51. The latter was introduced in January 2014, but briefly discontinued it later that year due to poor performance reviews. The RM380 shipped out about halfway through 2015.

According to financial filings released last week, Remington reported $204.3 million in second quarter sales, an increase of $2.2 million from last year. However, the company still operated with $4.6 million loss.