Gun show organizer: Events are just as much about the 1st Amendment as the 2nd 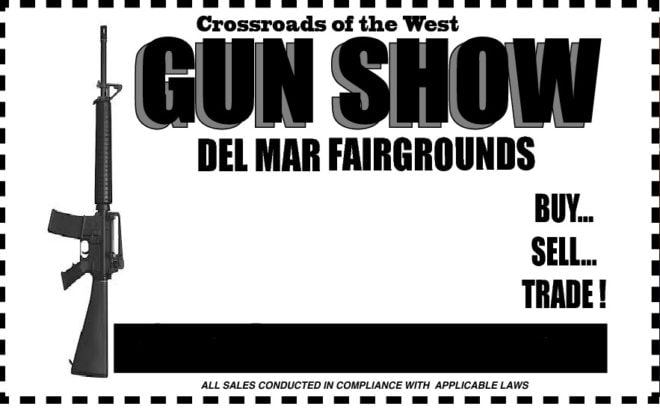 The Crossroads of the West gun show has called Del Mar home for a quarter century, and the organizer behind it says it is tightly regulated.

A group of about 20 concerned citizens in Del Mar, California are trying to pressure the local fair board to ban long standing gun shows. An organizer for the events fires back at that.

Bob Templeton is the CEO of Crossroads of the West Gun Shows, and has been putting on a regular show in Del Mar for 25 years.

Now, a group started as the Coastal Coalition to Prevent Gun Violence in July before finalizing its current name– Advocates for Gun Safety– is asking the 22nd District Agricultural Association, which operates the county-owned fairgrounds, to put a halt to the shows, and have promised to picket each one until they do.

When asked for comment on the group’s campaign, Templeton told Guns.com this has all happened before.

“Every few years a few anti-Second Amendment activists from Del Mar city mount a campaign to ban the gun shows from ‘their’ fairgrounds,” Templeton told Guns.com. “We have had several such challenges to our shows at the Del Mar Fairgrounds over the years, and so far the anti-rights group has lost. Let’s hope we can continue our record!”

Below is a letter Templeton wrote to the editor of the Del Mar Times, the area’s local paper. It remains to be seen whether they will publish it or not.

The activities at the gun shows are conducted in compliance with all applicable federal and state laws. California has the strictest laws in America governing gun shows and what can take place at the shows. No one…absolutely no one…can buy a gun at the gun show. All firearms buyers must complete an extensive federal and state background check and wait for ten days before they can take possession of any firearm ordered at the show.

Thousands of San Diego county residents attend each gun show, and there have never been any reports of firearms purchased at the show being used in any crime. The law-abiding gun owners of the San Diego area deserve
to be able to assemble and speak with others regarding their interests. It is as much a First Amendment platform for sharing views with other like- minded citizens as it is a gun show.

The gun shows are closely supervised by California Department of Justice and the San Diego County Sheriff’s Department. There are no illegal or unlawful activities taking place at the gun show at the Del Mar Fairgrounds.