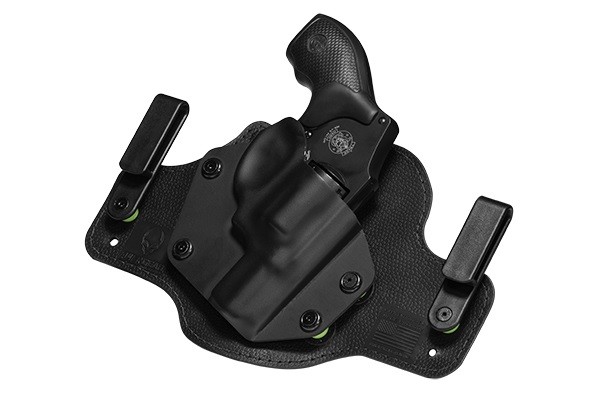 The Alien Gear Cloak Tuck 3.0 Revolver Edition features the same design as the 3.0 for semi-autos, including the ability to tuck in a shirt around the holster. (Photo: Alien Gear)

The company added popular revolvers such as at the Smith & Wesson Bodyguard, Ruger LCR and LCP and Taurus Judge to the bevy of semi-auto options currently available.

Alien Gear fans have long advocated for a revolver version of Alien Gear’s popular, “tuck-able” design. The company said in a press release that it had fielded copious social media requests from wheel guns fans looking for IWB love.

The Cloak Tuck Revolver Edition features similar materials as the semi-automatic version. A soft neoprene lining adds comfort for the wearer while a spring-steel core gives it the rigidity to withstand everyday carry.

“We use advanced backer materials including ballistic nylon, neoprene and thermo elastomer,” production manager Dave Ross explained in the press release. “You can feel the effort and care put into the 3.0 for revolvers the moment you put it on.”

The 3.0 is custom molded to fit specific models of guns and shooters have the option of choosing either a left or right-handed set-up. Included with the holster is either a standard pair of nylon clips or black steel clips. If neither of these options fits the bill, the company offers a swath of clips, loops or combos at an additional cost.

The Clock Tuck 3.0 Revolver Edition is available directly from Alien Gear and retails for $43.88.