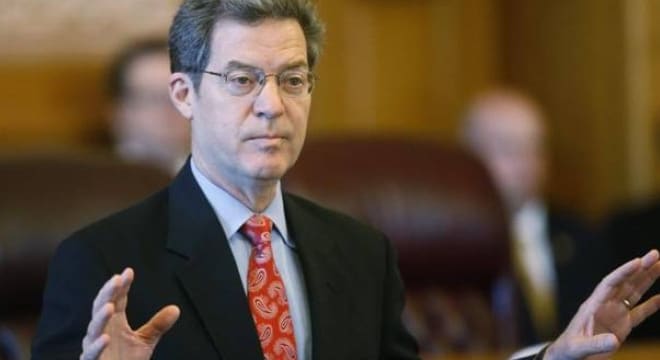 Gov. Sam Brownback signed the Kansas Second Amendment Protection Act into law in 2013 but state Attorney General Derek Schmidt was quick to point out it did not include NFA items (Photo: Bo Reader/AP)

A federal judge on Monday handed down probation to two men found guilty of violating federal law on manufacturing and possessing silencers despite their belief state law protected their actions.

Jeremy Kettler, 28, also of Chanute, who purchased an illegal suppressor from Cox, had been found guilty of a single count of possession of an unregistered NFA firearm and was given a year’s probation and a $100 assessment.

In each case, the men argued the Kansas Second Amendment Protection Act shielded Kansans from being prosecuted under federal gun control laws so long as the firearms were made and sold inside the state and marked as such.

The men came under federal scrutiny in 2015 after Kettler posted a video to Facebook of him shooting the suppressor he acquired from Cox, who advertised his business as a silencer maker despite not having the federal licenses.

At trial, attorneys for the men tried in vain to steer the argument to the validity of the Kansas Second Amendment Protection Act, to which state Attorney General Derek Schmidt countered did not include NFA items despite the contention of state gun rights advocates. In the end, Marten brushed aside the defense and held federal regulations held sway.

In a sentencing memo to the court, Cox argued gun silencers are not inherently dangerous and that efforts have been underway at the federal level to deregulate them from NFA controls under the Hearing Protection Act.

“The new President of the United States’ own son, Donald Trump, Jr., also a shooting enthusiast, has advocated for silencers as hearing protection for those who hunt and shoot,” reads the document, pointing out that Cox did not try to hide the fact he was making the devices under the belief he was following the law.

Ian Clark, Kettler’s attorney, made much the same argument. “The prohibited sound suppressor is not the type of item or material that creates a community danger,” he told the court. “It is not like drugs where the possession and sale of which can cause harm to the community generally. Kansas, the particular community at issue here, was responsible for the passing of the Kansas law that got Mr. Kettler into this mess in the first place.”