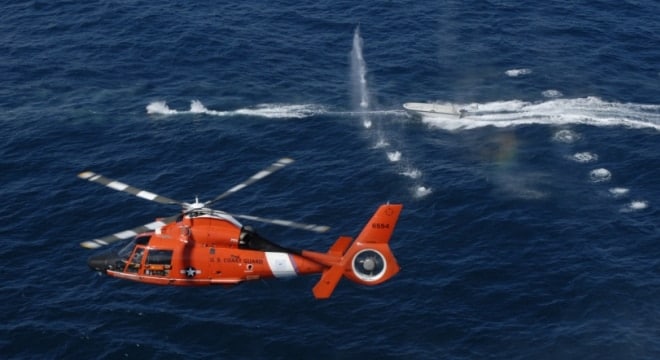 The U.S. Coast Guard on Monday announced the fatal shooting of an Ecuadorian man was in accordance with U.S. and international law and fully complied with the agency’s tactics and procedures.

Javier Darwin Licoa Nunez, 35, of Ecuador, was killed during a law enforcement operation 195 miles north of the Galapagos Islands Aug. 30, 2016. The USCG’s Major Incident Investigation Report made public this week found that Nunez, part of the crew of a suspected “go-fast” cocaine smuggling boat, died from fatal internal injuries caused by bullet fragments after a helicopter-borne Coast Guard marksman fired 10 rounds into the engines of the vessel while attempting to stop the craft.

“The U.S. Coast Guard goes to extraordinary lengths to avoid injury to suspects during narcotics interdiction operations. It is unfortunate that in this case a suspect was fatally injured,” said Vice Adm. Fred Midgette, commander, Coast Guard Pacific Area, in a statement. “This incident underscores the dangers posed by transnational organized crime networks that transport narcotics to the U.S.”

The incident began when an aircraft on routine patrol in the Eastern Pacific spotted the outboard-powered boat, covered with tarps, rectangular packages, and extra fuel. The Coast Guard Cutter Mohawk, with an armed MH-65D helicopter aboard, was directed to intercept the suspicious boat, which they did just before sunset. The helicopter found the vessel unmarked and, once they dropped altitude to 150 feet and 300 yards behind the go-fast, observed the four-person crew start to jettison packages into the water.

Authorized to fire warning shots or undertake disabling fire to stop the boat, the helicopter broadcast warnings in English and Spanish, turned on their blue lights and finally fired three volleys of warning shots ahead of the go-fast from an M240B machine gun equipped with tracers. The boat continued to speed through the waves, jettisoning cargo, and did not heave to.

Then, 15 minutes after seeing the boat throw out the first cargo, the gunner fired 10 rounds of .50 BMG ball ammunition from an M107 rifle into the engine compartment at the rear of the boat, stopping it in the water.

A boarding team from the Mohawk arrived by small boat and found the go-fast sinking due to an opened sea valve, but recovered a fatally injured Nunez, three other crew members, and the two engine cowlings for examination. While they were not able to recover any cargo, tests of the water in the area showed positive for cocaine.

An autopsy later confirmed Nunez was not directly hit by any gunfire but was fatally wounded in the abdomen by fragments. Of the 10 rounds fired at night from the helicopter at the fast-moving vessel, the majority hit the engines, with only two missing the boat entirely.

The review board found that the tactics and procedures used by the aircrew and the responding cutter were in agreement with established policies. During the investigation, the MII Board had the M107 rifle tested by another marksman who found the gun capable of hitting a 2-inch circle two out of three times at 100 yards using the same lot of M33 ball ammo used in the incident.

The three go fast crew members taken into custody have since pled guilty to “conspiracy to possess with intent to distribute cocaine on board a vessel subject to the jurisdiction of the U.S.” in a federal court.