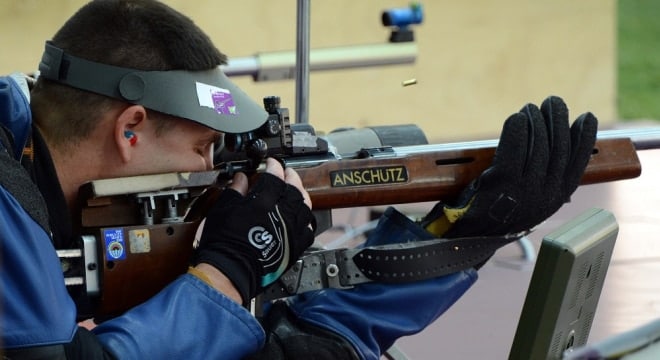 U.S. Army SFC Michael McPhail has competed in the past two Olympic games. He is ranked in the top 10 in the world in the 50m rifle prone and won 3 gold medals in international competition in 2015. (Photo: USA Sports)

The International Shooting Sports Federation, the governing body for Olympic-style shooting, has recommended a host of changes that could see more gender equality in the Tokyo games.

“We believe this is a fundamental step forward for our beloved sport,” ISSF President Olegario Vázquez Raña said in a statement from the group. “We fully support gender equality, and our Committees have worked very hard to develop a Tokyo 2020 proposal that will support the future growth of our sport.

“We want to retain 15 Olympic events, preserve equality in our three disciplines – rifle, pistol and shotgun – and offer all female and male athletes the same opportunities. Shooting is one of the oldest and most universal sports of the world; inclusion is part of our DNA,” said Vázquez Raña.

The events are some of the longest running in modern Olympic history.

The 50m Rifle Prone has been a staple of the Olympics since 1912 while the 50m Pistol– commonly called Free Pistol– has been in the games since 1896, in both cases with Americans winning the first gold medal awarded for the events. Men’s Double Trap made its Olympic debut in 1996 with the U.S. picking up gold at the 2008 Beijing Olympics.

USA Shooting, the national governing body for the sport of Olympic-style shooting in the U.S., made clear they opposed the move, noting Team USA’s historic success in these events.

“It is important to note that the U.S. Olympic Committee has in no way directed these Olympic shooting program changes,” said David Johnson, interim CEO of USA Shooting in a statement.

“While the elimination of Prone Rifle, Double Trap and Free Pistol is a big loss to many avid shooters in the sport, we are grateful that 15 Olympic events still do exist,” noted Johnson. “USA Shooting remains committed to its mission of winning Olympic and Paralympic medals and will work diligently to prepare our athletes accordingly to compete and be successful in the new added disciplines.”

Not all were so magnanimous in the decision. Five-time Olympian Peter Sidi, a Hungarian gold medalist at the 2010 World Championships, blasted the move, as reported by The Times of India.

“This is like committing a suicide, prone is one of the most popular events in shooting and we are doing away with it. The father of modern Olympics (Baron Pierre de) Coubertin was a free pistol shooter, so we are also killing the spirit of Olympics, with no regard to history,” said Sidi, who finished fifth at the 2016 Rio Olympics.

The move still needs the final approval of the International Olympic Committee.