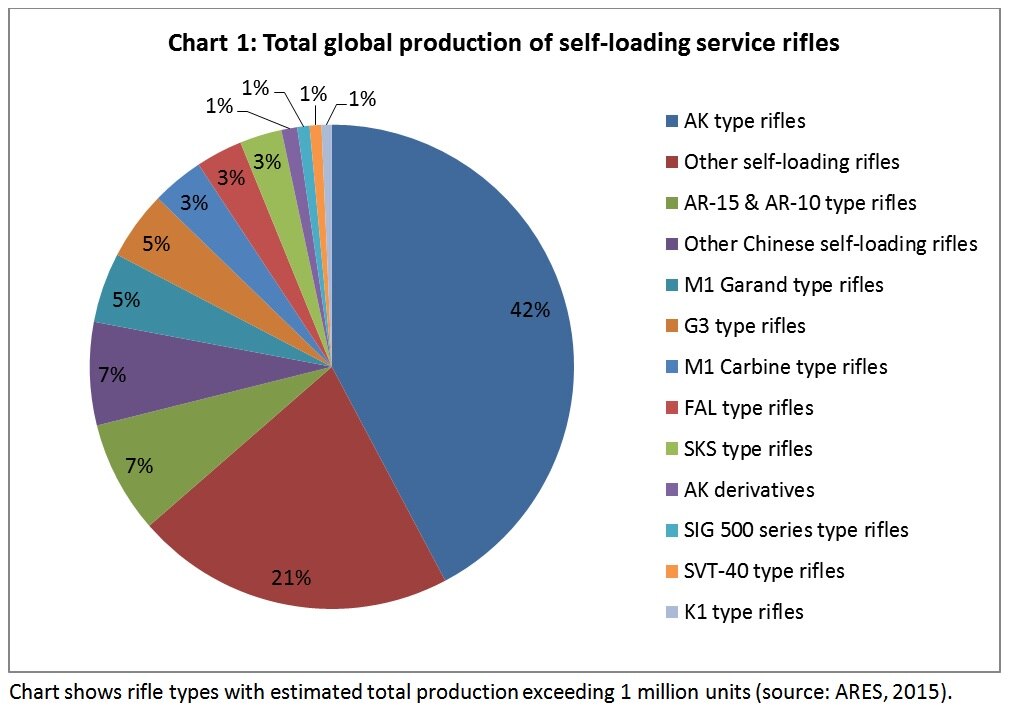 AK-47 style rifles accounted for almost half of the global production of self-loading rifles over the past century according to the study. (Graphics: Small Arms Survey)

A new study released by the Small Arms Survey found that over half of all autoloading rifles ever made for military use are either AK-type or AR-10/15 type designs.

The effort concentrates primarily on military arms issued as a primary combat weapon and not those built or marketed to the civilian or law enforcement user. As such it includes select-fire and automatic magazine-fed rifles such as the AKM and semi-auto battle rifles such as the M1 Garand made after the advent of smokeless powder. Excluded were crew-served weapons.

Starting with the Danish Navy’s order of 60 Rekylkarabin carbines in 1896 and moving forward, the study concluded some 175 million self-loading rifles have been produced for military use since then, noting this figure was “conservative.”

A history lesson of sorts, the study charts the move away from bolt-action rifles to self-loaders, noting the U.S. became the first nation to adopt a self-loading rifle — the M1 — as a standard military service rifle in 1937. By the end of World War II, bolt-action rifle production had been eclipsed by that of autoloaders, though the use of intermediate cartridges such as the 7.62x39mm and 5.56x45mm later largely replaced full-sized rounds. As a further evolution, more current designs such as the FN SCAR use increasing levels of modularity. 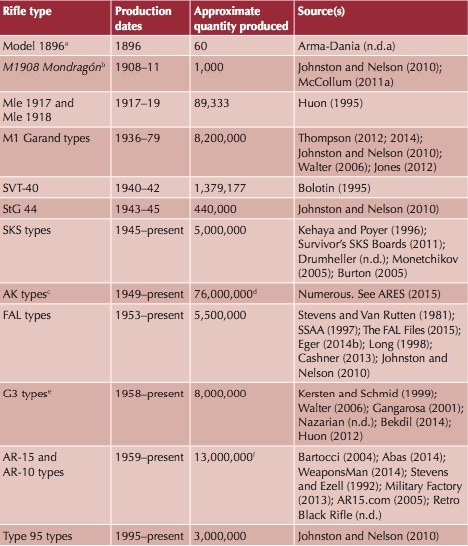 Other key findings of the study include the fact that modern rifles are very durable, noting that guns more than 60 years old are often still found in working condition on today’s battlefields from Mali to the Crimea.

“German StG 44 assault rifles have been documented during the ongoing conflict in Syria on numerous occasions, likely transferred to Syria by East Germany or the Soviet Union several decades ago,” notes the study. “The current conflict in Ukraine has featured decades-old rifles in service with pro-Russian Federation militants, including SKS rifles and other Second World War-era weapons such as PPSh-41 and PPS-43 submachine guns and PTRS-41 and PTRD anti-tank rifles.”

One aspect pointed out by the study are the effects of preventive maintenance on rifle longevity, making note that while AK-type rifles have “proved to be very durable” their Achilles’ heel is in a dirty gas tube.

“This component, produced from a relatively thin sheet metal, corrodes if not properly cleaned, eventually degrading to the point where the weapon will malfunction,” reads the volume. “Nonetheless, this process takes considerable time and can be mitigated with proper cleaning.”

However, the study also points out that many countries, especially in the Third-World, still maintain huge stocks of relatively obsolete bolt-action military rifles including 2.1 million Lee-Enfields held by India. Brazil has another 833,000 similar rifles in storage.

While focusing on military arms production, the study did note that self-loaders have been extensively used in civilian circles for over a century, with Remington Model 8 and Winchester Models 1905, 1907, and 1910 on the market well before World War I and at least 3 million AR-15s are in circulation in the U.S.