Do Copper Bullets Offer the Same Performance To Hunters as Lead Bullets? 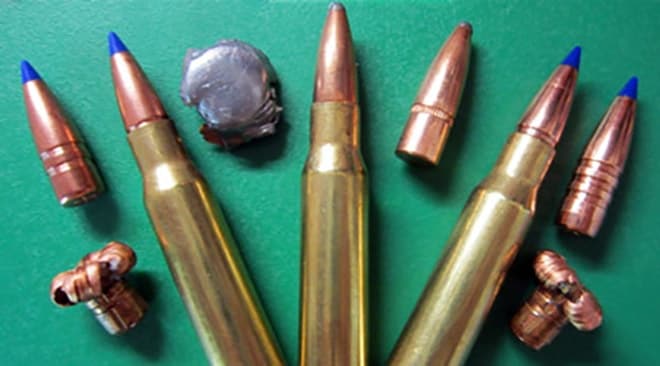 Since the birth of the firearm, lead projectiles have reigned supreme. There is good reason for this. Lead is abundant, relatively cheap, easily melted and cast, and possesses a density and malleability that makes it nearly ideal for use in high-speed projectiles.

In recent decades, however, a number of bullet makers have bucked tradition and began crafting bullets that shunned lead for such materials as copper, gilding metal alloy, and other non-lead metals. Among the alleged results of such alternative designs was a boost in performance that endowed relatively light-for-the-caliber bullets to be used for purposes generally reserved for heavier lead projectiles.

A while back I was able to determine the potential validity of such claims by pitting traditional lead bullets against all copper projectiles in a terminal performance test of my own design.

What I set out to determine is if non-lead bullets potentially allow a hunter to ethically use light for caliber bullets while in pursuit of such thin skinned medium game as whitetail deer. There are a number of reasons why a hunter may want to do this, not the least of which is recoil reduction without sacrificing terminal performance or flatness of trajectory. A copper, 110 grain .30 caliber, bullet matching the on-game performance of a middle weight lead projectile is undoubtedly an appealing concept for the recoil sensitive hunter.

The Remington bullet is about as tried and true of a basic deer bullet design as one is likely to find. It, and bullets like it, have been used to successfully take thin-skinned medium and large game for decades, so I reasoned that any projectile that equaled or exceeded the terminal performance of the Remington bullet in ballistic test media would be adequate for the same uses.

Competing against the Remington bullet were .308 Winchester handloads pushing 110 grain and 130 grain TTSX bullets.  The TTSX bullet is one of the more recent incarnations of Barnes’ famed X bullet series. The all-copper projectile sports a pre-segmented front section that is designed to open into four sharp petals upon impact. The bullet’s tendency not to fragment is purported to increase weight retention and penetration giving a hunter the best of both worlds: a bullet that creates large wound cavity via bullet expansion as well as deep penetration. 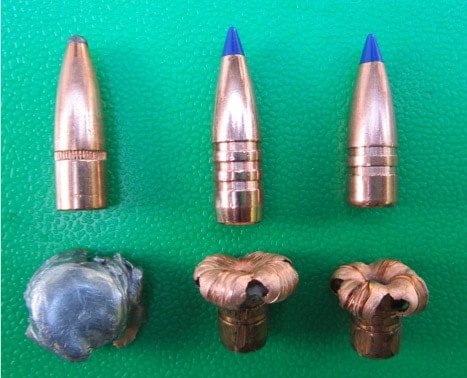 The tested .308 caliber bullets before and after firing. From left are the Remington 150 grain pointed soft point, Barnes 130 grain TTSX, and the Barnes 110 grain TTSX. (Photo: Jason Wimbiscus)

My setup for this project consisted of a 5x5x8 inch block of Ballistic Technology’s Bullet Test Tube material backed by densely packed polyester fill material and softened paraffin wax blocks. The Bullet Test Tube media is a dense, soft, sticky wax-like material that not only provides a record of cavitation, but is also a highly efficient bullet stopper. According to Ballistic Technology’s website, one inch of penetration in bullet test tube material is approximately equivalent to 1.3 inches of penetration in properly calibrated 10 percent ballistic gelatin.

Since I fully expected the high velocity rounds to completely penetrate the first 8-inch test block, I backed it with six inches of densely packed polyester fill material – essentially the same stuff found inside couch cushions – and behind that placed twelve-inches of softened paraffin wax as a failsafe bullet stopper. The setup was not intended to act as an analogue for animal tissue but rather as a means of comparing the terminal performance potential of one projectile to another.

I placed my chronograph just forward of the setup in order to record the impact velocity of each projectile. All shots were fired at a distance of 20 feet from my Baikal MP94 with a 24-inch barrel.

As expected, the bullet completely penetrated the first test block and entered the polyester fill material. The bullet came to a rest after traversing the entire six inches of polyester. The maximum diameter of the cavity in the first test block was 1.6 inches. The bullet itself expanded to a diameter of .66 inches and had a post-impact weight of 116 grains, retaining approximately 77 percent of its original mass. Recoil was by no means unpleasant from the heavy gun I was using, but it was noticeable.

It came as somewhat of a surprise that this bullet out-penetrated the heavier Remington factory round. The 130 grain Triple Shock made short work of the first test block, completely penetrated the polyester, and then buried itself 3.5 inches in the wax backer blocks behind the poly fill. The cavity made by the Triple Shock in the bullet test tube media was significantly larger than that left by the Remington bullet and measured 2.8-inches in diameter at its widest point.

The recovered bullet had expanded in a textbook fashion to a diameter of .625 inches, the four copper petals that comprised the frontal section of the projectile opening into more of a flower than a typical mushroom. The post impact mass of the bullet was 129.2 grains which translates to nearly 100 percent weight retention. I’m assuming that the only weight shed by the bullet was a result of the polymer ballistic tip disintegrating on impact. Recoil from this load was so slight I failed to take note of it.

The manner in which the 110 grain Triple Shock performed came as even more of a surprise than the performance of the 130 grain version of the bullet. In spite of its light for caliber weight, the bullet zipped through the first test block, defeated the  polyester backer and came to a halt 3.5 inches into the wax blocks behind that. While the bullet penetrated as much material as the 130 grain Triple Shock, the cavity the 110 grain projectile left in the first block was slightly smaller with a maximum diameter of 2.4 inches.

The recovered projectile had expanded to a diameter of .557 inches and retained 109.2 grains of its original mass. Felt recoil was practically nonexistent.

At first glance, it appears that the lighter weight Barnes TTSX bullets are capable of matching the terminal performance of a standard, lead, 150 grain bullet of the same caliber. While it’s true that deer are not made of ballistic wax and fiber fill, the results of the above trial are such that I would not feel uncomfortable employing any of the tested bullets in most deer hunting situations. That being said, the only way to truly test a big game bullet is by using it on game. So, who knows where I can find some deer?