Savage’s A17 is the first successful 17HMR semi automatic rifle since its introduction at SHOT 2015.  While there were initial concerns about the reliability of the 17HMR in a blowback action, we’re now two years removed and not only is the A17 still on the market, but Savage has added a number of new variations — and even calibers — to the lineup. 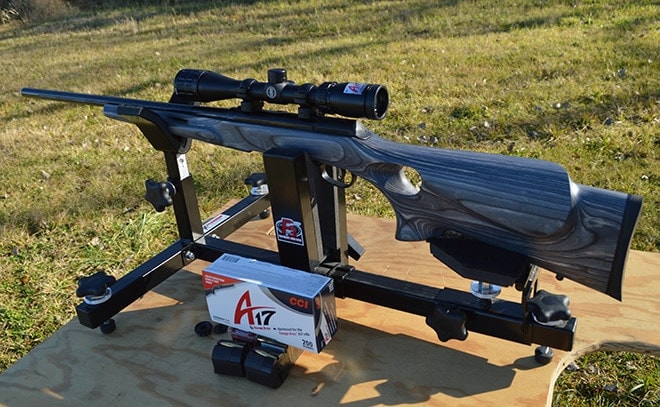 While the 17HMR round was always thought to be too hot to reliably cycle a semi-automatic action, Savage spent years creating a delayed blowback system that effectively allows part of the pressure to escape prior to opening and cycling. A lug on the bolt locks into the receiver at the moment of firing, releasing pressure before working the action, and re-chambering the next round.  This technology essentially solved the problems other rimfire semi-autos were having with 17HMR bolts opening too soon, rupturing cases, and even creating more serious over-pressure issues. 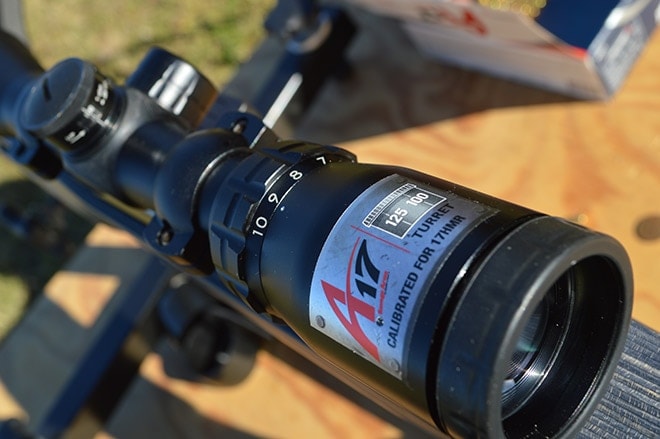 Now that Savage’s parent company, Vista Outdoors, also includes both CCI and Bushnell, it was a natural progression to see a tag-team deal.  Our test A17 Laminate Thumbhole Target combo included a Bushnell 3.5-10×36 scope with 17HMR-specific BDC turrets, an adjustable objective, and Multi-X reticle.  To sweeten the deal, CCI created A17 Varmint Tip 17-grain ammunition moving at 2650fps in 200 round boxes.  Fans of the 17 HMR will recognize this velocity as a full 100fps faster than comparable ammunition.  But never fear, just because the A17 ammo exists, the rifle is marketed to handle any factory ammunition. 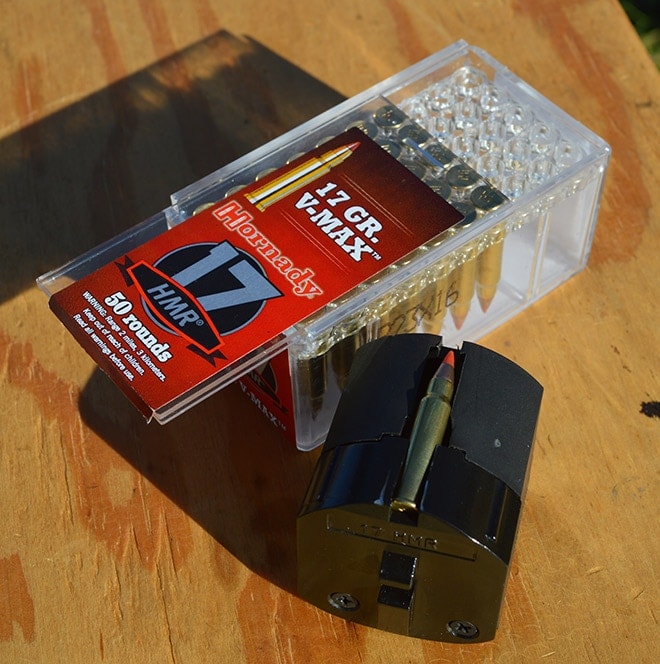 The original A17 synthetic rifle carries an MSRP of $473 while a newer heavy barrel synthetic version is set at $494. There’s a laminate sporter for $554, a laminate target model at $571 and our test model, the thumbhole laminate target for $631.  Most are now available combo-ed with our cartridge-matched Bushnell A17 optic.

Because the A17 series of rifles was meeting such success, Savage introduced an A22 Magnum last year, and word leaked prior to SHOT 2017 that an A22 Long Rifle semi-auto will be entering the market in late Spring.  The A-family is growing fast, but the 17 is the heart of the lineup. 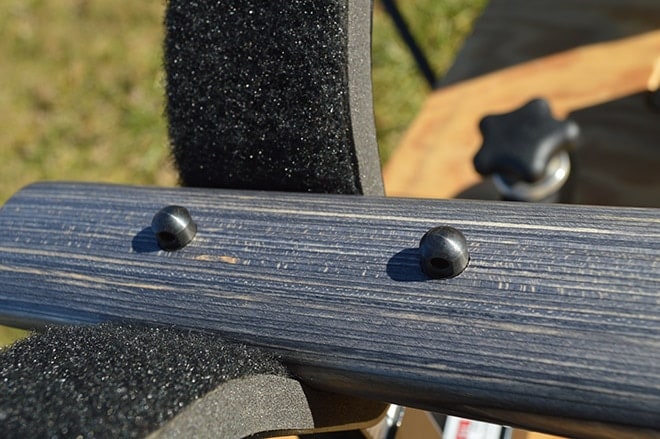 Though we spent some time with the original synthetic A17 shortly after its introduction, the polymer stock and standard taper barrel did not pique the interests of this varminter.  Now that they’ve perfected the design and sweetened the pot, here we are with a sharp-looking gray laminate thumbhole-stocked heavy barrel target model A17. 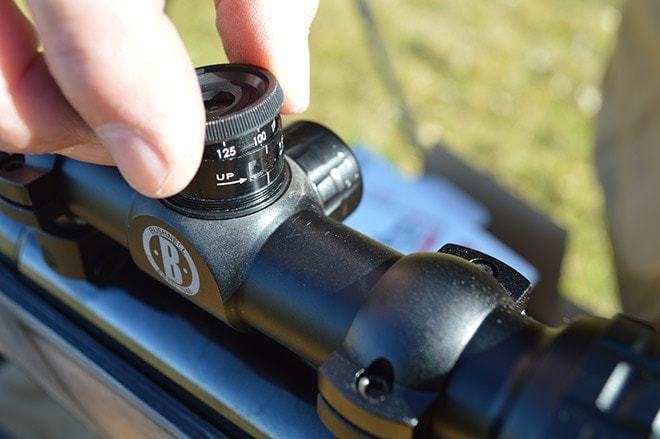 The hard chromed bolt features what Savage calls “dual controlled round feed” making operation smoother and more reliable.  A 10-round rotary polymer magazine holds each shot in its own slot, thereby negating any issues with rimmed rounds stacking vertically. The A17 wears a standard crossbolt safety, and the receiver is drilled and tapped with factory installed mounts.  The bolt-lockback latch is located at the front of the trigger guard and will hold the bolt open.  Closing the action is as simple as pulling back slightly on the bolt, thus releasing the latch. 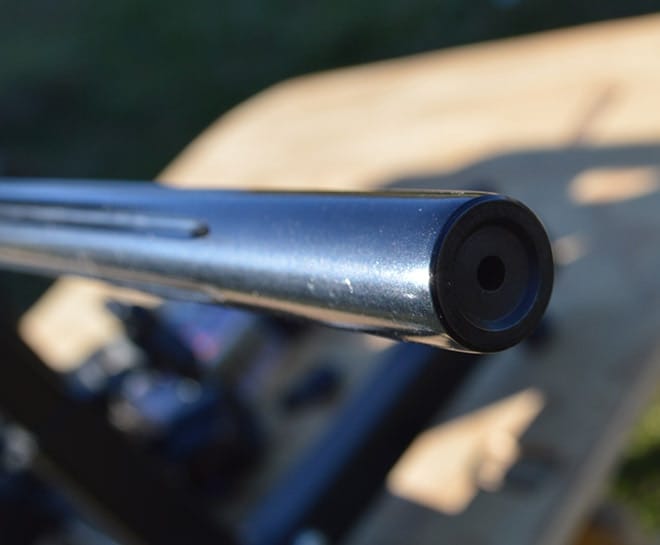 Accuracy is driven by the button-rifled, carbon steel 22” heavy barrel.  Overall gun length is 41.5” and weight with an empty magazine and the Bushnell scope on our scale is 6.95 pounds.  The 1:9 rate of twist is ideal for the 17’s teeny bullets. Savage’s adjustable Accutrigger is standard fare, with our test gun breaking out of the box just a hair over three pounds on a Lyman pull gauge.  Fit and finish of the gray pepper laminate stock was much better than we expected for the price point.  Sling swivels are standard, and the dual front swivels on our test model allow for easy bipod mounting.  Though our test gun has an MSRP of $631, real world prices are right around $500. 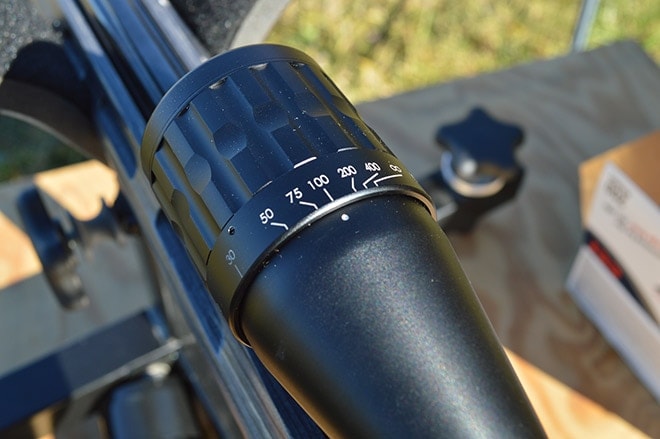 We shot predominantly CCI A17 ammunition, which performed admirably, but no test would be complete without throwing plenty of other ammo at the rifle, so we also fired Hornady 17gr V-Max, CCI TNT 17gr, and Winchester Super-X 20gr.

Right out of the box, we ran into cycling problems, whereupon the first round would fire, but fail to extract.  That was quickly accounted to the fact the gun was filthy from previous testing.  After a return to the gun room and a thorough teardown and cleaning, we were off to the races. Though the extraction/ejection issue was rectified, we ran into several failure to feeds, a problem that indicated magazine problems.  We had two mags with the rifle, one appearing new but the other clearly well used and not seating as snugly.  When we switched to the new factory mag, it was all systems go for 250+ rounds.  This does, however, raise some questions about the longevity and durability of the magazines. 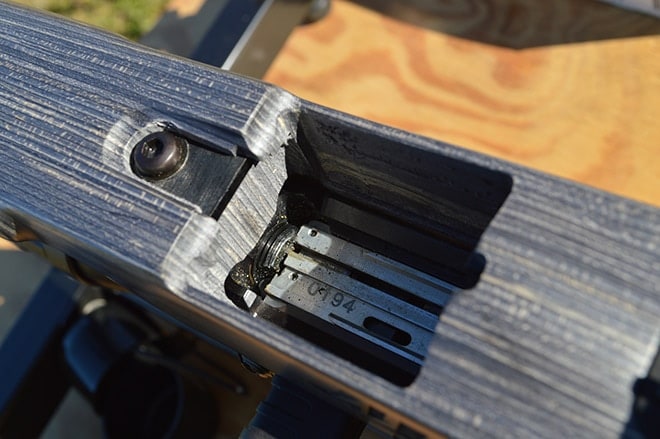 Not surprisingly, the A17 ammunition showed the best accuracy results, with the average 5-shot 100 yard groups at 0.71” and the best grouping over all the ammo with A17 at 0.23.”  Hornady was next in line with averages of 0.89” and best overall at 0.47.”  Though there has been some concern raised over the A17 cycling older types of 17HMR ammunition, we did not experience any of those issues.  In fact, the A17 reliably cycled and fired 100-yard sub-MOA groups with every brand of ammo, even with a variable, light crosswind on a 40 degree day. 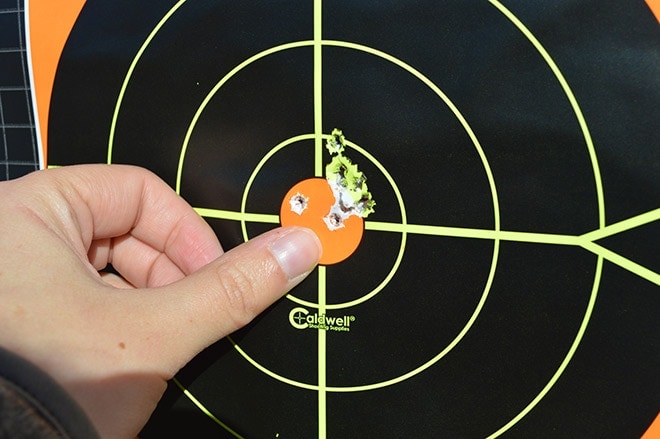 Our best five shot grouping with the A17 ammo was 0.23.” (Photo: Kristin Alberts)

Firing the rifle from both the bench and prone positions is ideal given the shape of the buttstock.  An upgraded, oversized bolt handle is easy to operate with gloves. Though the rifle comes drilled and tapped for easy scope mounting, it is Bushnell’s scope that really puts the icing on this combo’s cake.  The drop-compensating turret is geared specifically for CCI’s A17 ammo, and allows shooters to simply turn the turret in 25-yard increments from 100 to 250 yards for the simplest accuracy adjustment available.  The thumbhole stock is silky smooth and fits right-handers like a glove, just as did Savage’s earlier 93R17 bolt series.  Sadly, lefties are left out in the cold on this model.  With the combination of the specialty optic, crisp adjustable trigger, bull barrel, and the stock fit, the A17 is a rimfire rifle built for accuracy and enjoyment. 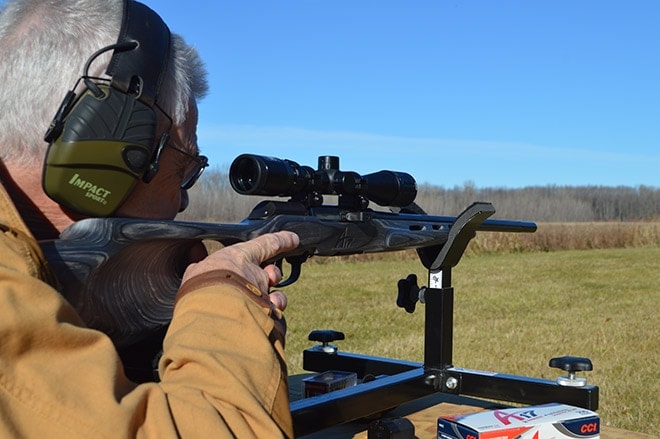 This model of A17 is perfectly suited to bench shooting. (Photo: Kristin Alberts)

The A17’s dual front swivel mounts are ideal for both mounting a bipod and a sling without removing either  Magazines load like any other rotary design, and can be mastered in short order.  The rifle is so much fun to shoot due to its accuracy and nonexistent recoil, we’d suggest high-volume varminters and paper punchers alike acquire a few extra mags because you won’t want to take time to reload once the fun begins.

Our only qualms with the design center around the magazine, given the feeding issues with the mag that did not lock snugly.  And secondly, the ten round mag is great, but we hope to see extended 15 or 20 rounders down the line.  When a rifle is that enjoyable to shoot, the more rounds the better. 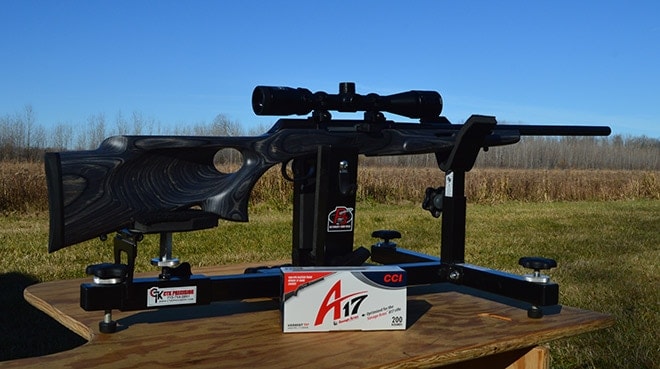 Savage Arms A17 Thumbhole Target Combo has an MSRP of $631. (Photo: Kristin Alberts)

The A17 laminate thumbhole target is a dream for prairie doggin’ and varminting fools who love semi-autos but have been relegated to bolt actions or single shots because of the higher pressures of 17HMR round.  The A17 is a true 150+ yard rimfire shooter leading the way in its class. Kudos to Savage for putting in the years of research to keep rimfire shooters in the gun and on target with a quick, accurate, affordable, American-made rimfire with enough model options for any shooter.