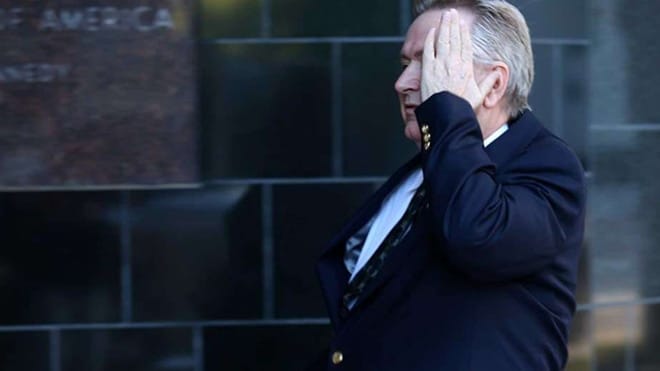 Steve Stockman covers his face while entering the U.S. District Courthouse on March 21, 2017, in Houston. (Photo: Houston Chronicle/Godofredo A. Vasquez)

A former Texas Congressman known for trolling Democrats on the Internet has been arrested for stealing hundreds of thousands from charitable foundations to fund a his political campaign and personal endeavors.

Also, Stockman has been charged with filing a false tax return; and Posey with falsifying an affidavit to obstruct an FEC investigation. Their colleague, Thomas Dodd, pleaded guilty to his involvement in the scheme on March 20.

The Justice Department said Stockman solicited approximately $1.25 million in donations based on false pretenses. While some of the money was used to fund Stockman’s Congressional campaign in 2010, he and Dodd used $285,000 for personal interests.

According to court documents, Stockman and Dodd used his office to solicit a $350,000 charitable donation, which he used to fund a Senate bid in 2014 and conduct a covert surveillance project on perceived political opponents.

Also during his Senate campaign, Posey used a nonprofit entity to secure a $450,571 donation in order to fund a mass-mailing project attacking Stockman’s opponent. However, only half of the money was used for the project. The other half was used to pay for other expenses and personal interests.

According to the Houston Chronicle, Stockman was arrested on March 16 by agents with the FBI’s Houston office as he prepared to board a plane to the Middle East, but was released on $25,000 bond after surrendering his passport. He blamed his arrest on a “deep state conspiracy” that resulted from his outspoken criticism of the IRS as a Congressman.

As a politician, Stockman made headlines in 2013 when he made a series of inflammatory gestures like a bumper sticker that said: “if babies had guns, they wouldn’t be aborted;” a month later hosted a campaign giveaway of a Bushmaster AR-15, the same model used in the Sandy Hook massacre; and after receiving backlash he shared an image of gun lubrication with a sticker that said “liberal tears.”