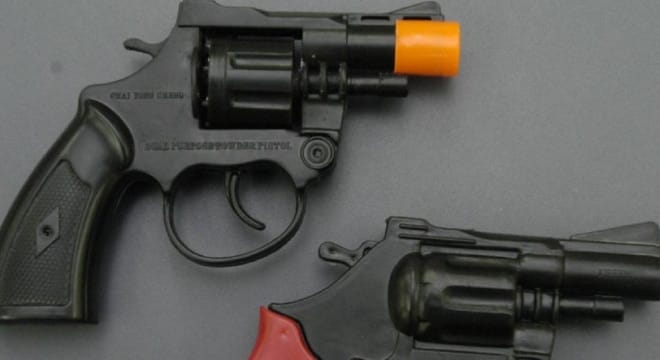 A Florida teen found out you cannot effectively pistol whip someone with a toy gun. (Photo: newsapi.com.au)

Authorities in the Gainesville, Florida area reported a would-be stickup artist ended up on the wrong side of a police K9 after his weapon of choice broke into pieces and fell to the ground.

The Alachua Police Department announced they had a suspect in custody last Wednesday following an attempted robbery of a customer at the Raceway gas station located at 16171 NW US HWY 441.

In custody is Tyrese Hendrilus Ervin, 15, who allegedly approached an unidentified woman around 10:30 p.m. on April 18 and, putting what appeared to be a small handgun to her head, yelled: “give me the money.” When the woman attempted to get away, the gunman attempted to pistol whip her only to have his “gun” break and fall to the ground. It was later ascertained the weapon was a toy

Fleeing after witnesses to the incident challenged the subject, Ervin was captured by responding police who established a perimeter around a wooded area near the Spindrifter Lounge where a K9 named “Thor” had tracked him.

Ervin was booked on armed robbery, aggravated battery, and aggravated assault, as well as a domestic battery for an incident prior to the Raceway encounter.