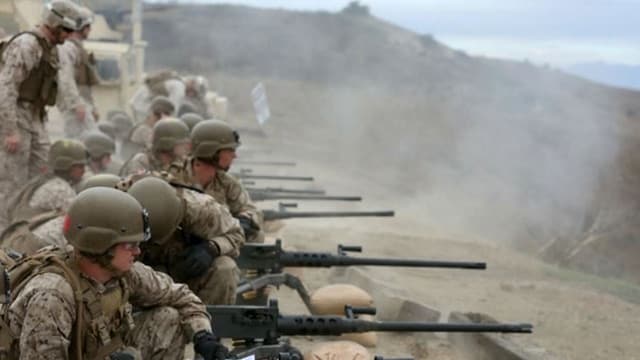 Marines fire the M2A1 during a training exercise at Marine Corps Base Camp Pendleton in California. (Photo: U.S. Marine Corps)

The Marine Corps announced last week that units have started using the updated M2A1 .50-caliber machine gun, which improves on the classic M2.

The upgraded gun is easier to use, safer and more lethal, according to the Marine Corps Systems Command, which is in charge of contracting and deploying weapons systems for the Corps.

The M2A1 weighs 84 pounds and is 67.75 inches long. It can fire up to 600 rounds per minute and has a maximum effective range of 2,000 yards, with a total max range of nearly 7,500 yards. The MCSC touts three key improvements from the M2, which include fixed headspace and timing, a quick-change barrel, and a flash hider that reduces the gun’s signature by 95 percent at night.

With the original M2, Marines have to manually set headspace, the distance between the face of the bolt and base of the cartridge when it’s chambered, and timing, the adjustment that gets the gun to fire when the recoiling parts are in the right position. Adjusting these incorrectly could hurt the user or damage the weapon. But the M2A1 eliminates that manual, time consuming process.

Another big improvement is the quick-change barrel. “Marines no longer have to manually screw the barrel in to set the headspace,” said Maj. Harry Thompson, team lead for General Purpose Weapons at MCSC. “Instead, the barrel pops into the receiver and locks in place quickly, similar to the M240B machine gun.”

These upgrades shorten the amount of time the machine gun is out of operation and allows Marines to respond to enemy fire more quickly. “It’s much quicker to move the gun from position to position and put it back into action,” Thompson said.

The third improvement is a flash hider that significantly reduces muzzle flash, allowing Marines to better mask their positions during firefights. “Because they’re less exposed, Marines will have better survivability,” Thompson said.

The Marine Corps Systems Command will get about 3,600 M2A1’s into the hands of Marines.

“We completed Phase I fielding in March 2017, which covered infantry units, the majority of infantry-like units and infantry Reserves,” said Kelly Sullivan, a program analyst for General Purpose Weapons at MCSC. “We’re currently starting Phase II, which should run through the end of May. The fielding process will be finished during FY18.”

The Army started upgrading the M2 in 2011. Earlier this year, two U.S. companies split a $221 million contract to build M2 and M2A1 machine guns for the Army.