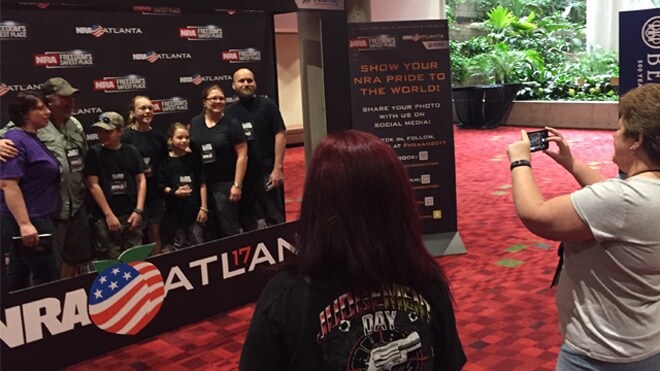 A family posing for pictures at the picture booth during the NRA’s annual conference in Atlanta on April 28, 2017. (Photo: Daniel Terrill/Guns.com)

The National Rifle Association saw a 10 percent bump in revenue during election year 2016, but also spent $42 million more than it earned, according to a financial statement given to members at last week’s annual conference.

The statement consolidates revenue and expenses from six NRA-affiliated organizations, including its political action committee, according to the statement. It lists $433.9 million for total revenue and other support along with $475.9 million in expenses.

However, the NRA carried over monies from the year before. At the end of 2015, the NRA had approximately $42 million remaining after expenses, according to the statement.

The biggest increase in spending for 2016 went toward program services to the tune of $288 million, a 52 percent jump from the year before. The statement does not go into great detail about it, but in filings with the Internal Revenue Service the NRA describes program services as “centered on the NRA’s core mission of firearms safety, education, and training.”

According to the group’s IRS Form 990, examples are “too numerous to detail” but include NRA’s Refuse To Be A Victim, Eddie Eagle, NRA Museum, NRA Advancement, NRA Country, the Great American Outdoor Show, and NRA Annual Meetings and Exhibits.

“The Association strives to direct the maximum percentage of its funding toward educational and other general operations programs, legislative activities and member services,” the statement says, adding 80 cents of every dollar the NRA spends goes toward program services.

The NRA also provided a letter alongside the statement detailing any member of the governing body that has done business with the gun lobby in excess of $2,000.

Payments the NRA received came from NRA board members who also head a company that advertised in NRA publications and/or rented space from the NRA. They include Ronnie Barrett, of Barrett Firearms; Pete Brownell, of Brownell’s; Steve Hornady, of Horandy Manufacturing; Robert Nosler, of Nosler; and Sandra Froman, of Sturm, Ruger and Company.

Expenses the NRA accrued include:

Leading up to the 2016 election, the NRA also spent more than $30 million in support of Republican presidential candidate Donald Trump, who has maintained a close relationship with the organization since becoming president.

According to the statement, the NRA generated the majority of its revenue from membership dues, $163.5 million, down about $2 million, and contributions, $171 million, up 24 percent, in 2016. Program fees accounted for the third largest amount with $69 million, up $4 million. And investments, royalties and assets accounted for approximately $30 million.

The statement also includes details about investment growth. By the end of 2016, the NRA’s cash and investments totaled $173.3 million.