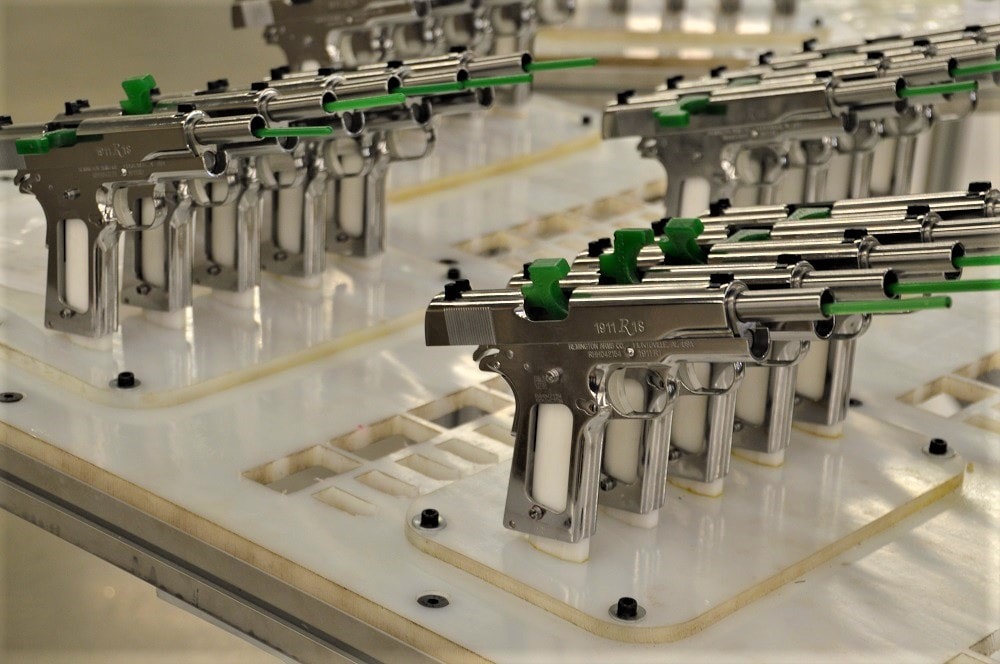 Guns.com recently had the opportunity to look behind the curtain at Big Green’s plant in Alabama and see how everything from .22s to black rifles are born.

In 2014, Remington announced after an eight-month courtship it would invest $110 million into a 500,000-square-foot facility formerly used by Chrysler just outside of Huntsville with an aim to consolidate production.

Though Remington owns nearly a score of subsidiaries, just eight were selected to move to the plant in Alabama. Those included suppressor maker Advanced Armament Corp. from Lawrence, Georgia; Montana Rifleman from Kalispell, Montana; Tapco from Kennesaw, Georgia; LAR Manufacturing from West Jordan, Utah; Para-Ordnance from Pineville, North Carolina; DPMS from St. Cloud, Minnesota; the Bushmaster and Remington 1911 production lines in Ilion, New York; and a research and development facility in Elizabethtown, Kentucky.

In 2016, the Remington elected to close their Mayfield, Kentucky, plant and move the operations conducted there to Huntsville as well.

Currently, the Remington family of companies operates from 12 locations across nine states employing over 3,500 people and distributes its products throughout the U.S. and in over 55 foreign countries. Besides its original plant located in Ilion, NY, Huntsville — which employs almost 500 — is among the largest of their facilities.

With a confident flair that rivals that of the professor on Gilligan’s Island, Remington’s William Smalley started off the tour of 40,000-square-foot research and development wing inside the Huntsville factory. Strictly no photos allowed.

“We live and die by data,” says Smalley, as he guides us through a warren of labs, each designed for a specific purpose. As he walks, he explains how consolidating the researchers from several distant lines in one location has helped streamline the group effort, as a solution worked out by one team in the past can help shortcut problems encountered in new projects, cutting development time.

He shows an environmental lab where they can simulate sub-zero temperatures and UV exposure, aging parts months in just a few days. A dryfire lab where a mechanical arm dubbed “Van Damme” racks pistol slides thousands of times. A series of 18 indoor firing ranges including one that stretches 200 yards. Components are magnaflux tested. An electrical lab is stocked with gear, much of it made in-house, used in the quality control process.

The northern Alabama city is home to Redstone Arsenal and NASA’s Marshall Space Flight Center with some 36,000 military and contractor jobs involved in high-tech support and fabrication. As such, it has the nickname of “The Rocket City” and several experts from the area’s medical research and precision aerospace workforce can be found occupying the lab. In one, a tech examines a barrel under an optical microscope, in another, a doctor of material science explains a 60,000-psi tensile tester that “breaks everything” and shows how it is used to test flexion in polymer stocks. Bullet components for Barnes, another Remington brand, are sliced neatly apart and embedded in resin to be studied.

In areas so clean you could eat off the floor, you’ll find a Zeiss electron microscope in use, validating the depth and spread of a PVD coating. Another room tests microhardness and Rockwell hardness of steel.

In another, Smalley has two 3D printers each the size of a FedEx truck, able to utilize direct metal laser sintering, a form of additive manufacturing which can quickly produce just about anything. Smalley says such rapid prototyping allows the R&D team to push a rough design from concept to the hands of an engineer in 72 hours.

“Did you bring your library card?”

Inside the gun library rest 6,400 firearms of all shapes and types. Two bearded military veterans serve as the curators among the stacks of weaponry and seem to know what inhabits every rack. Here are stored not only competitive designs, for reference and comparison, but also Remington rarities such as the “Black Widow” an all-black Nylon 66 with red diamonds (serial no. 4), a prototype M40 sniper rifle with a carbon fiber barrel and tags from the 1st SFG, and a rack of Remington’s entry to the Army’s Compact Semi-Automatic Sniper System competition. Other curiosities are a working Dardek pistol, a South African SS77 machine gun in 30.06, as well as a Gyrojet rocket gun.

The purpose of the library is so that engineers can come and literally check out past designs to see what worked and what didn’t. On one rack is a Remington Model 12 rifle with tags on it going back to 1939. Another has Model 700s which use electronic ignition of the same style as Olympic free pistols. The AAC Honey Badger used by FPS Russia has a place of honor. 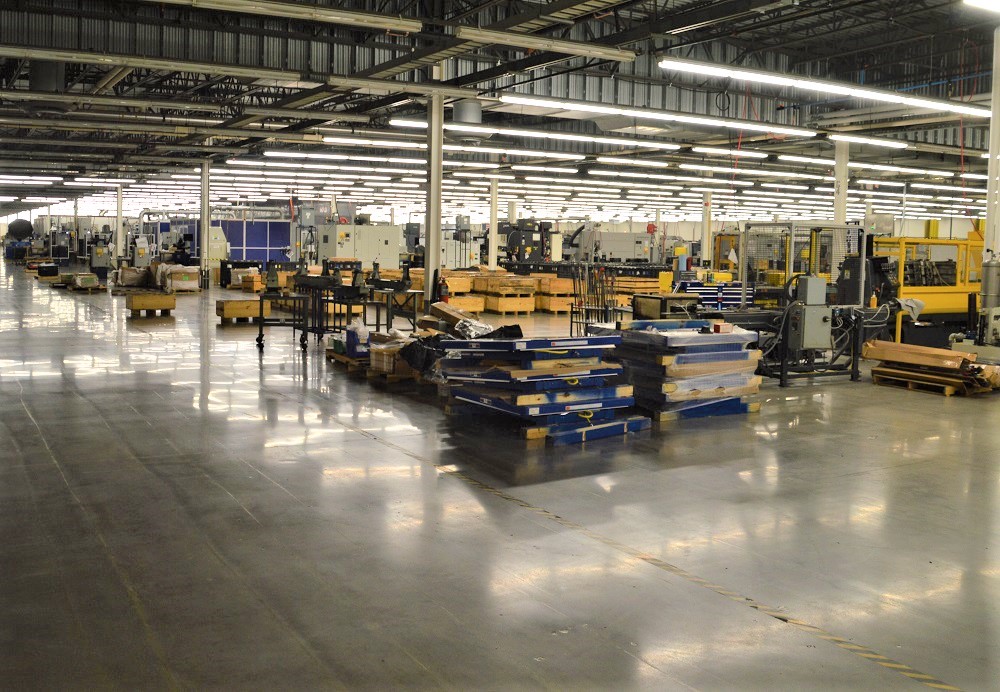 Sam Gregory takes over and covers the manufacturing side of the plant, which uses a flexible model to integrate the machining operations that in the past wasted time and space. The facility makes all its rifle barrels fully in-house, says Gregory, as he walks us past blocks of machines.

On Remington’s new bolt-action hunting rifle, the Model 783, he explains that the process to make barrels at the old Mayfield facility, which used 26 machines, now only needs three. 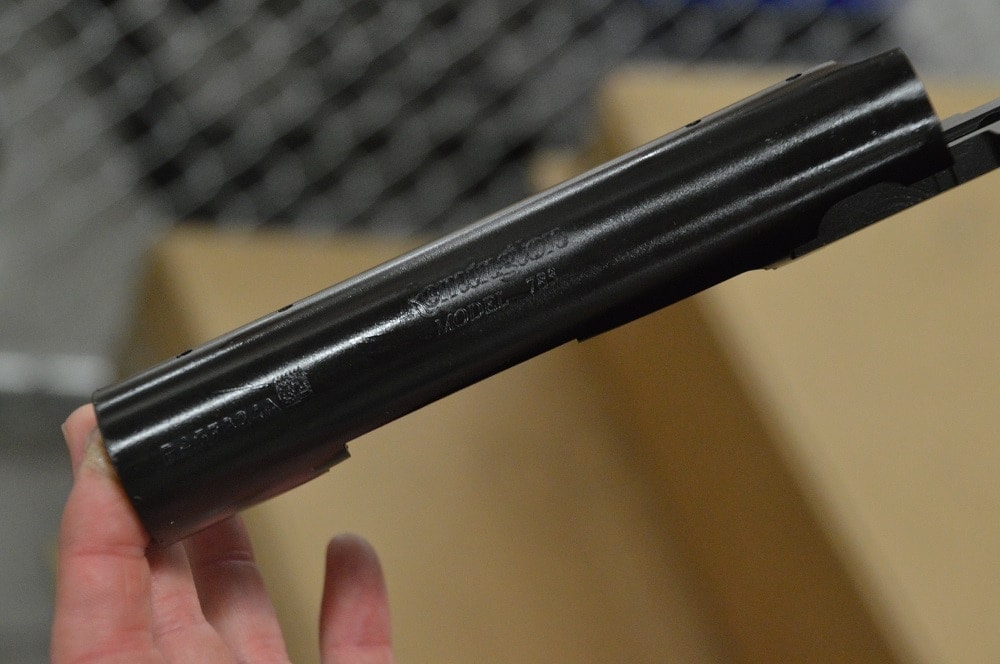 A 783 receiver, straight from being coated

Moving through the various stages, it takes five days for a 783 to be born from raw materials to packaged rifle. 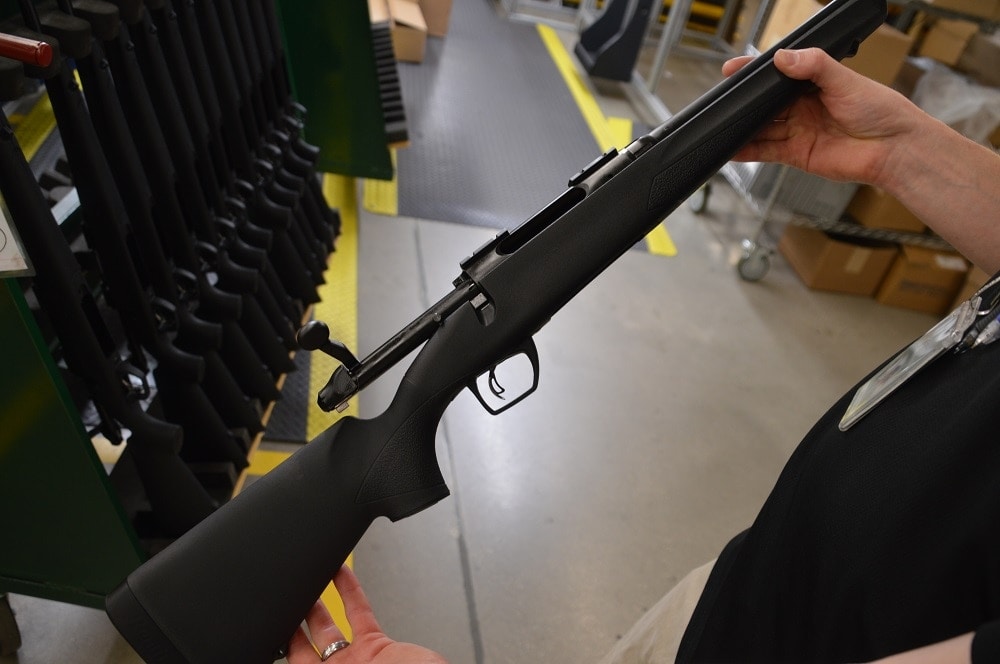 Similarly, when the plant received the LAR AR-15 assembly line three years ago, 20 machines were needed to produce an AR upper. Now, this is done with three. Automation is key in every step. 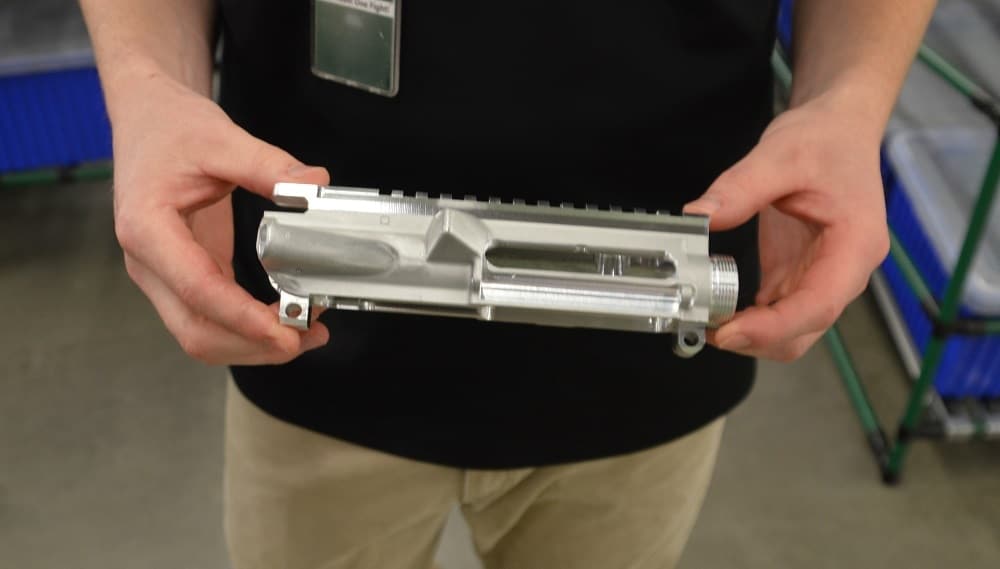 An AR upper, ready to coat. The Huntsville facility produces both the DPMS/Panther Bushmaster lines for Remington 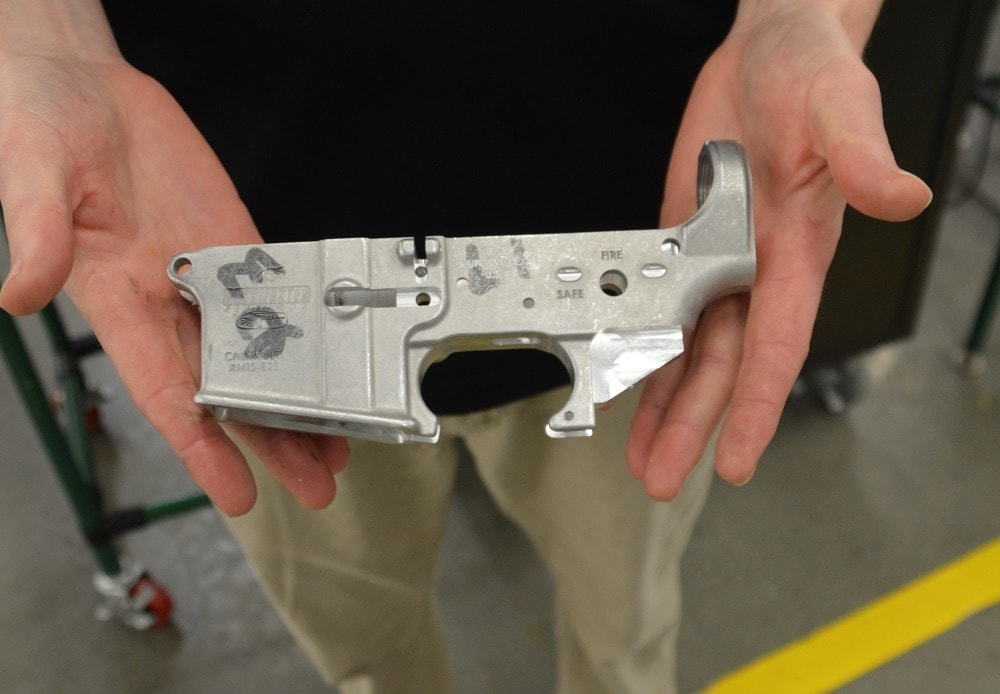 A Bushmaster lower “in the white”

Accountability is a buzzword, with cameras monitoring each stage of production. One machine engraves serial numbers for compliance, with a photo of each saved and cataloged the moment it is applied. Each gun is function tested and fired with (wait for it) Remington ammo, before being boxed and made ready to ship. 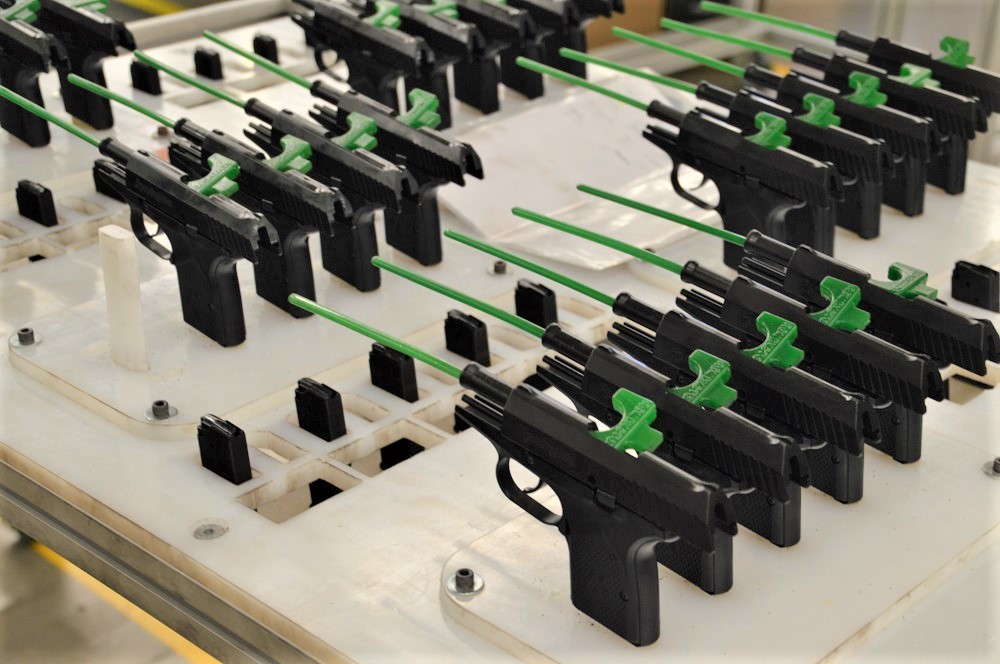 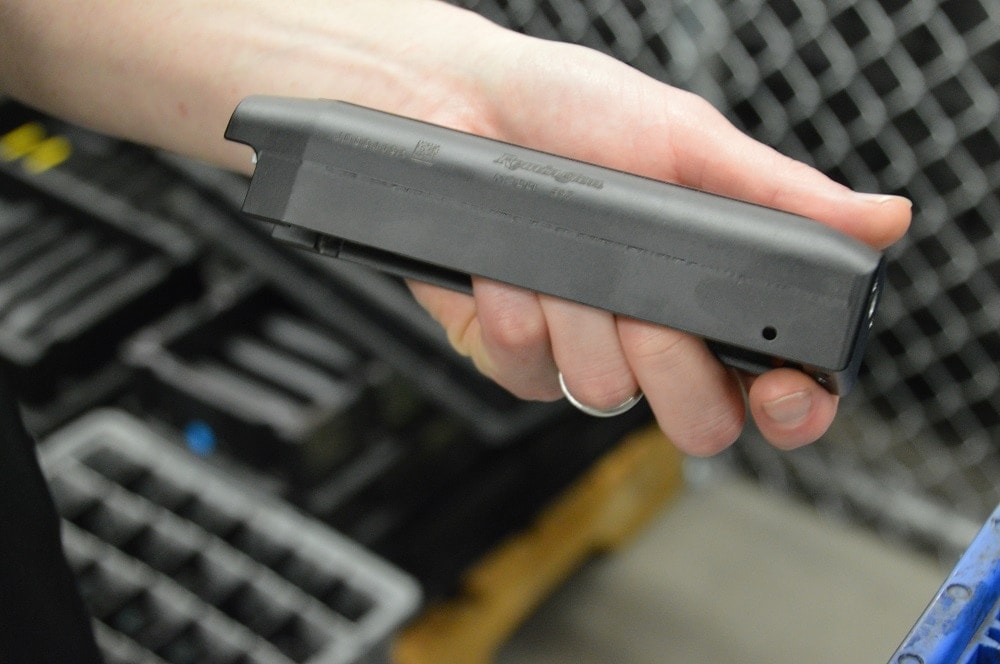 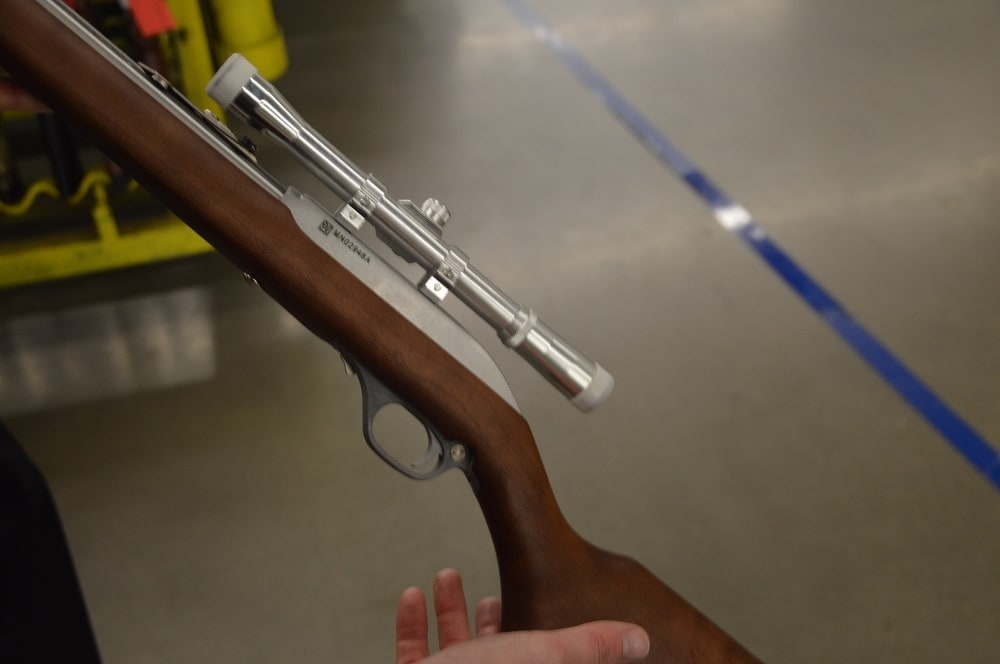 Marlin 22s, such as this classic Model 60 design, are made near the Remingtons 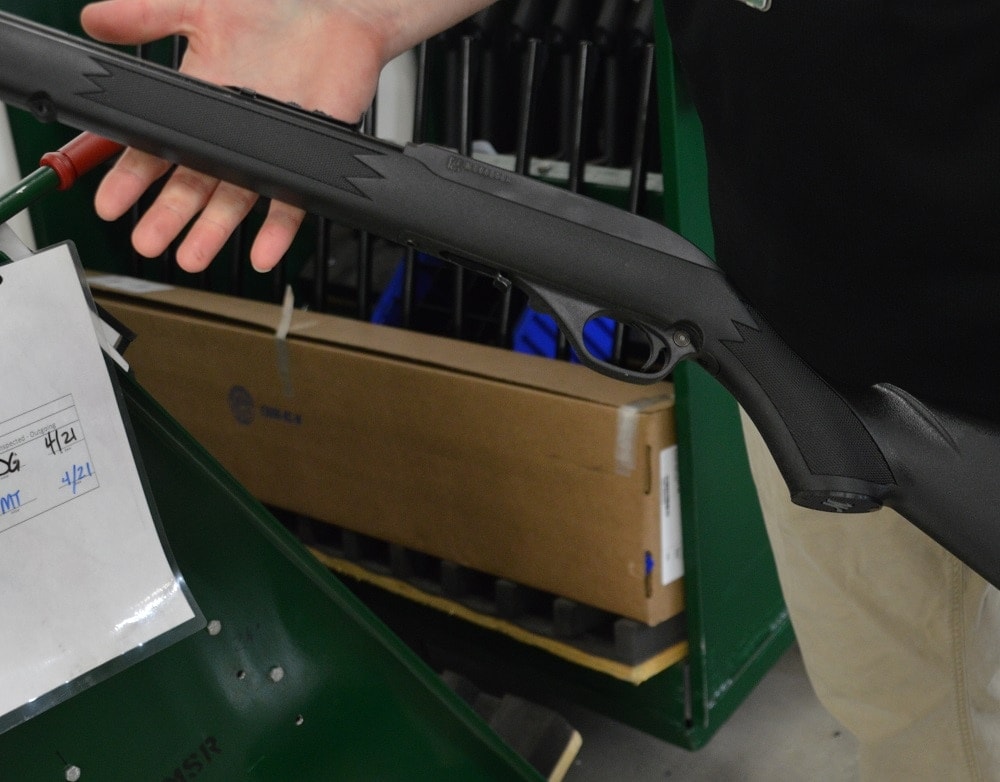 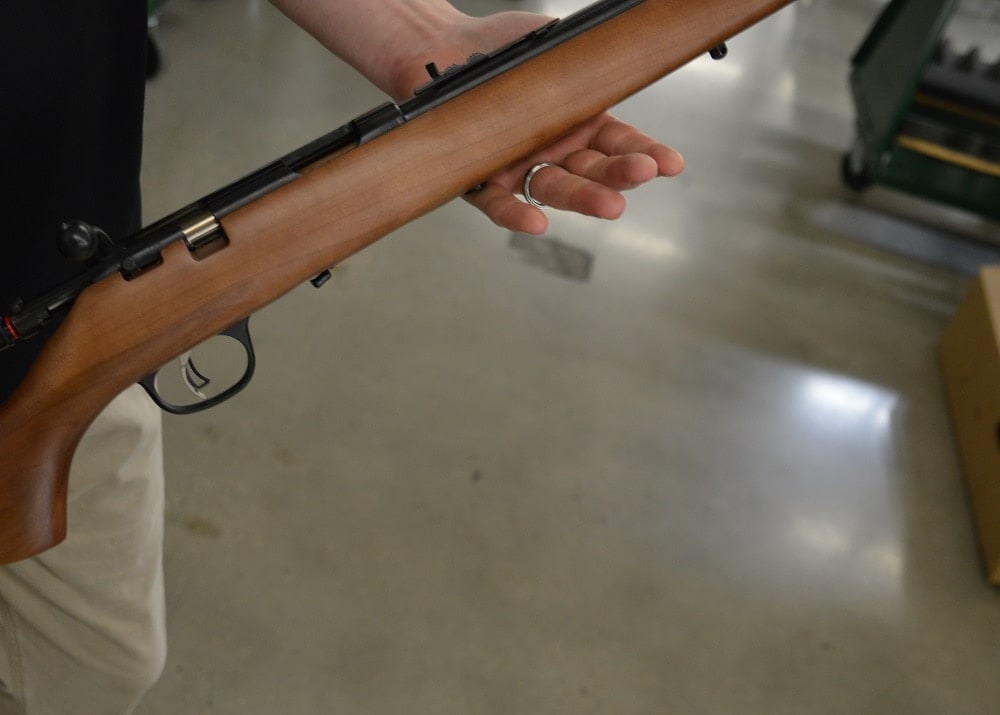 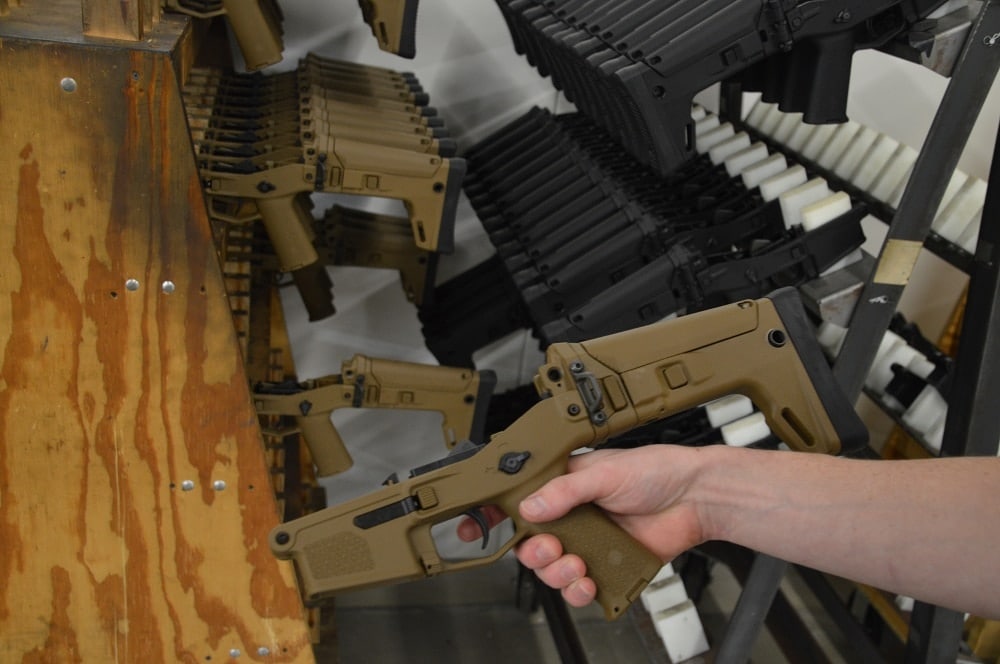 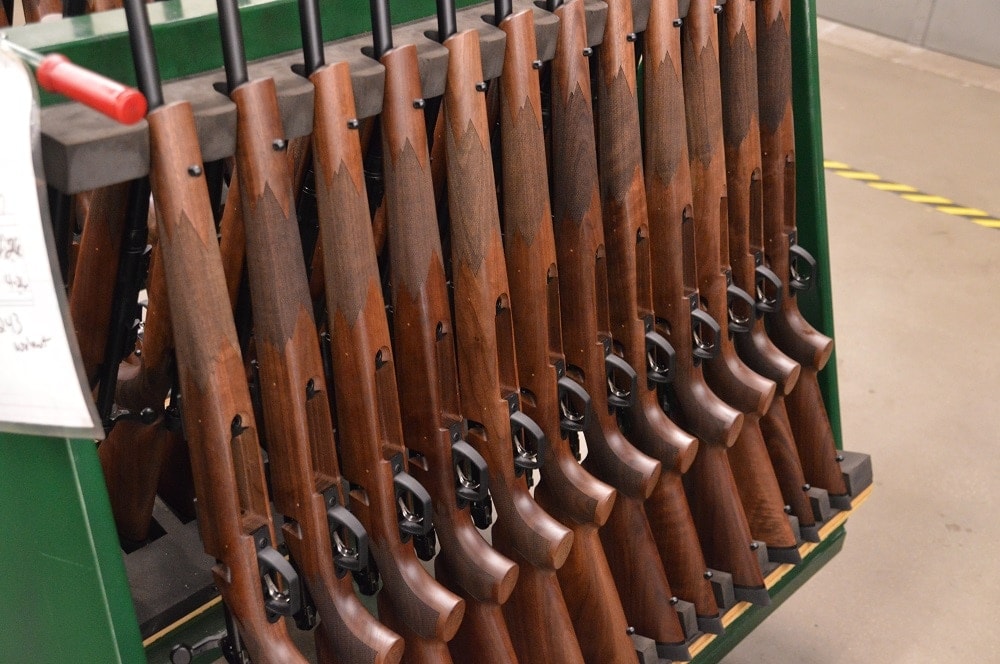 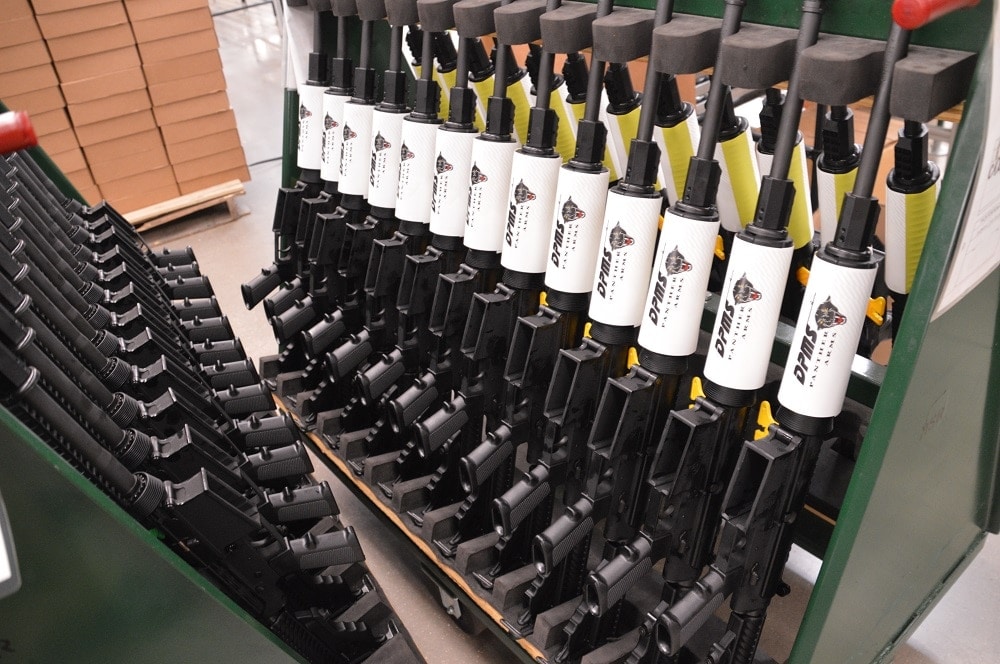 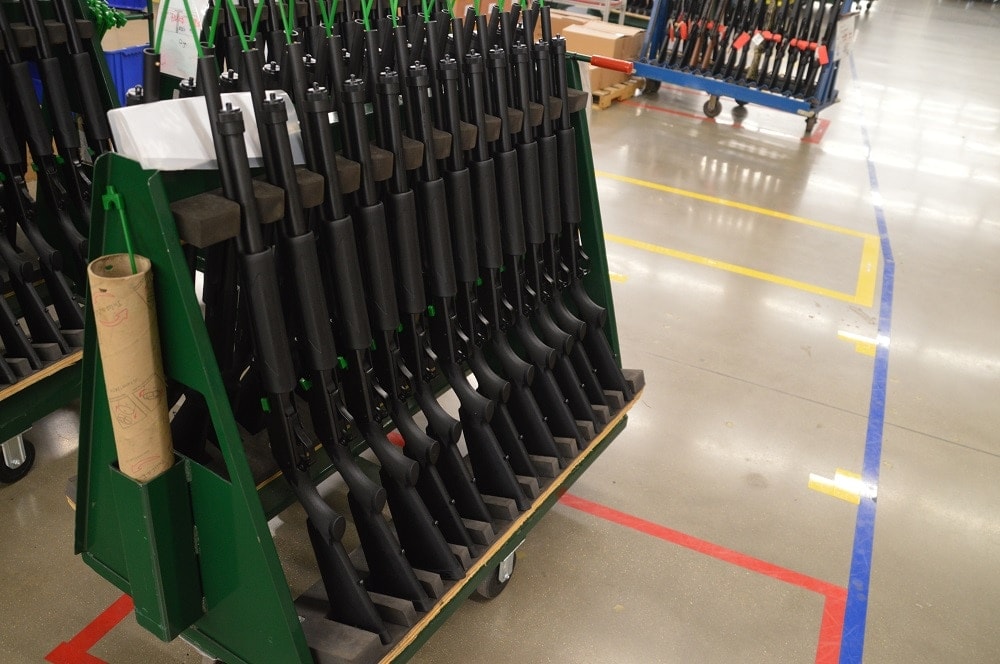 Alongside H&R shotguns. Yes, they make those in Huntsville, too. 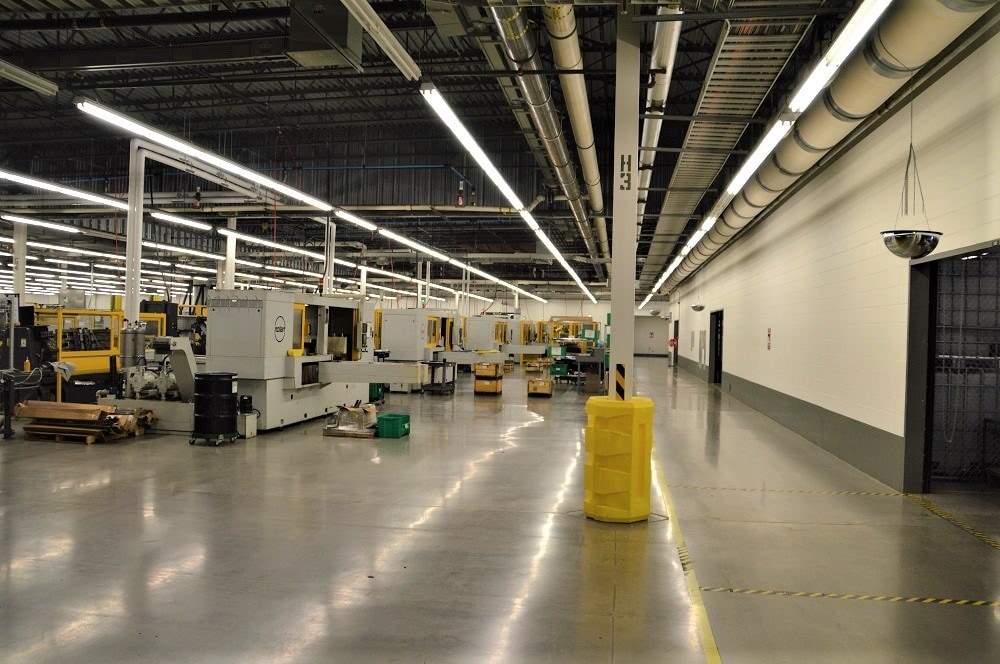 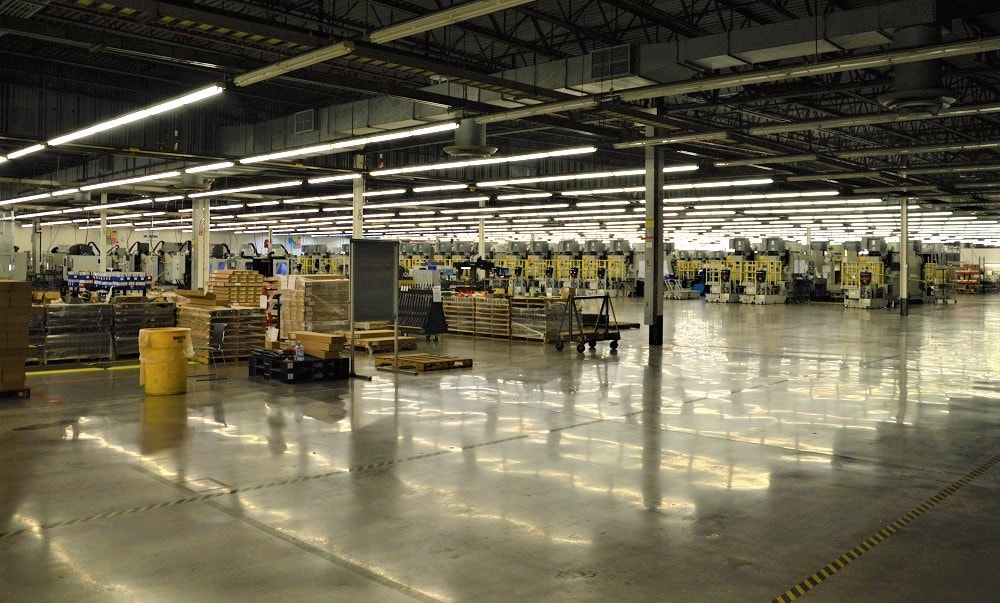 And the 500,000 sq. ft. facility still has lots of open room to expand into further lines

With floor space open, the plant has the capability to expand its operations if needed. A 2016 projection by the company had envisioned a 1,800-person workforce by 2021. However, with investors concerned about a glut of inventory, it remains to be seen if the expansion will continue at the robust projection.