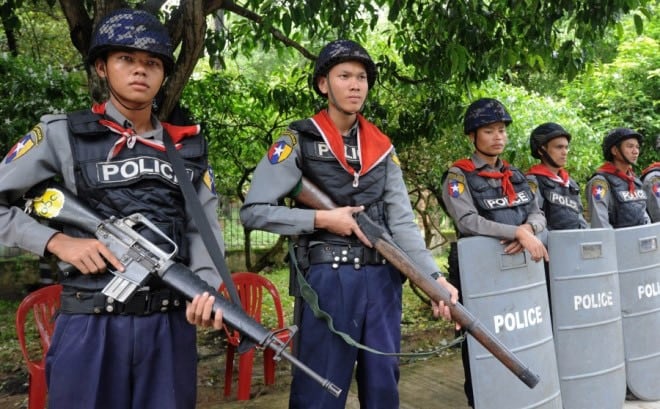 Burmese police forces bear a Greener Police shotgun alongside a Colt 603 AR-15, circa 2015. These guns still tend to show up wherever the British once had colonial aspirations.

So your country has a reputation for traveling to exotic foreign lands and taking them over as part of your growing worldwide empire. In said new lands, you still need to arm the locals to keep the criminal element in check (much cheaper than providing a police force). But at the same time, you don’t want to give them modern military grade weapons that could be used against your own troops if things got real. This has happened in history many times but in this case, the colonial power in question was the British Empire and the gun that was the answer was the Greener Police Shotgun.

It’s an odd gun, with an odder history, but if you find one, they make nice collectables.

W.W. Greener has long been one of the most trusted names in shotguns in Great Britain, formed in 1829.  Internationally, the company was known as the inventors of modern chokebores.  In the early 1900s, the British government came to this highly reputable firm to make them a very special gun. The gun that was needed would be used to arm colonial police forces in places like India, Egypt, and Africa so that they could enforce their own local laws without having to inevitably call in the British Army garrison to do it for them. 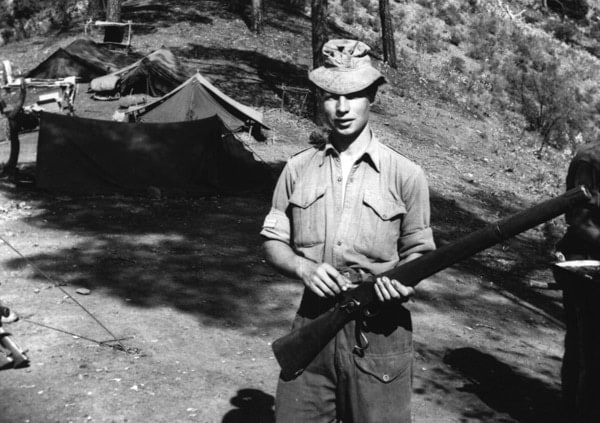 British Army soldier in Cyprus with a Greener shotgun, 1950s.

The gun needed to be simple so that the average person could figure it out, durable so that it would last as long as possible in unforgiving environments with little maintenance, and effective at close range. With all this in mind, the government wanted some more peculiar features; the gun needed to have a low rate of fire and if lost would be worthless to whoever found it without continued British support.

Tasked with these parameters, Greener produced the Police Shotgun.

In the tradition of keeping it simple, the Greener was based on the tried and true Martini-Henry falling block action. The single shot Martini-Henry lever action was used on the standard British army rifle for about thirty years. Furthermore, many of these rifles had been turned over to Egyptian, Indian, and other colonial military forces when the Brits replaced them with the Short-Magazine Lee Enfield, which meant that odds were good that locals on the ground would be familiar with the gun’s operation. For those who were not, the Martini was country simple to figure out. Simply drop the lever which opened the loading gate, insert the ammunition (one round only) into the exposed chamber, then raise the chamber and fire. 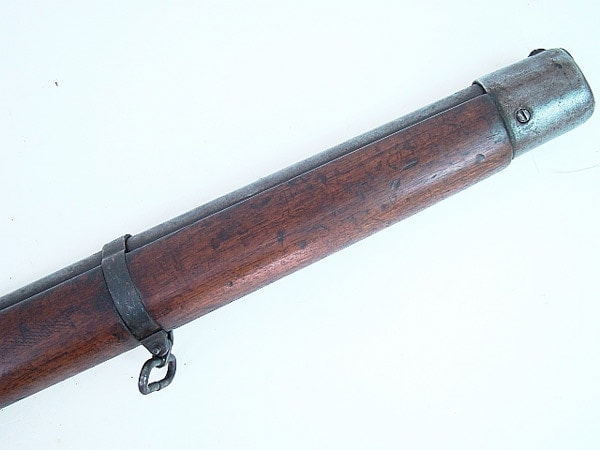 Greener shotgun muzzle (note how the barrel is close to flush with the forend).

The gun was made with heavy steel, thick springs, and slabs of dense wood to ensure that it would survive hard service in far off land in the hands of minimally trained users. The barrel length is 26 inches and overall length of firearm is 42 inches. The gun’s forearm extends all the way to the muzzle to protect the barrel from being bent or warped. A hard steel cap protects both the muzzle crown as well as the forend itself. This cap could double as an effective impact weapon when needed. For crowd-control situations, it could be fitted with a bayonet mount to attach a standard issue pig sticker when party crashers came to visit. Likewise, a steel butt plate was usually attached to provide an impact tool from that end.

Since local native police had no need to snipe people at long distances, the gun had a smoothbore barrel. This overengineered single shot shotgun could only be loaded with a special round, also made for, and sold almost only by, Greener. In theory, this kept the gun restricted to use by authorities or its allies. If unauthorized parties captured them or a local government revolted, the guns were only valuable until the ammunition captured with them lasted. To further keep the gun out of hands of those not authorized to use it, Greener’s MkIII EG versions had a special 3-pointed firing pin that was incapable of piercing the primer of essentially anything but their proprietary cartridges. 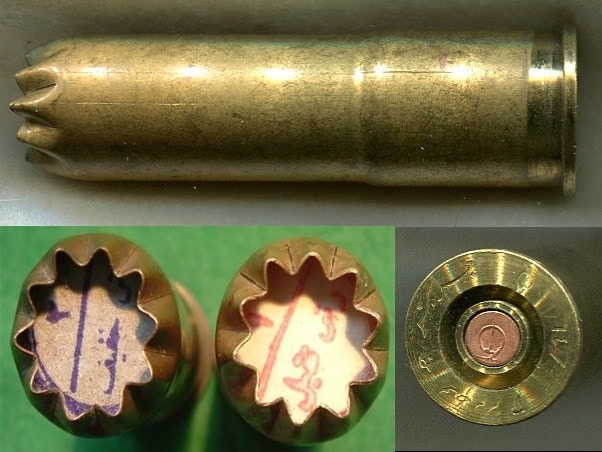 There are no good figures as to how many were made by Greener from 1920 through at least 1975, but suffice it to say the totals are in the tens of thousands. Egypt alone received more than 30,000 of the guns and it is these hard serving North African veterans that tend to pop up on the US market most often. Egyptian guns run anywhere from $150-$400 depending on how nice they are, but be careful as these guns are often confused as Greener Harpoon Guns (what Quint used to shoot the shark in the 1975 film, “Jaws“), or even Martini Rifles by those who don’t know better. 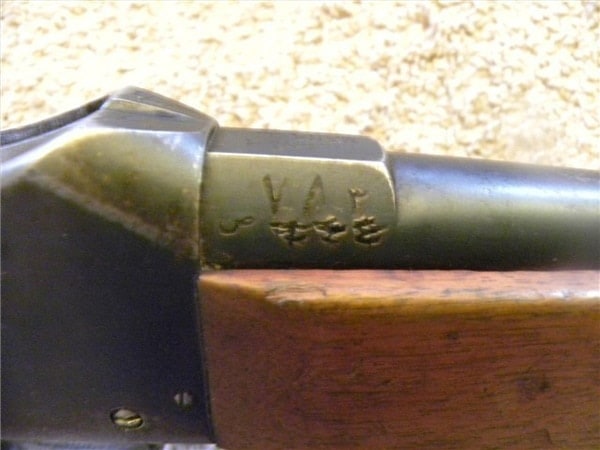 The Egyptian guns will have Arabic cyphers on the receiver while all Greeners will be marked on the left hand side “WW Greener, Maker.” They are referred to often as EG guns as they are marked as such, meaning they were intended for issue to the Egyptian Gafir police. Odin Arms and Royal Tiger among others have imported these consistently over the years. Due to their nature, some are C&R eligible, or even require no FFL at all to transfer. 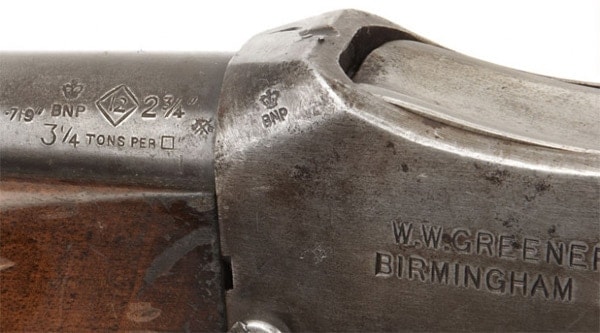 Greener shotguns come in two primary gauges, the bottlenecked 12-gauge Greener, and 14-Gauge EG (usually just Egyptian guns). The 12-gauge Greeners are actually marked “13 gauge” on the bore as they are for the special Police shells only. Do not try to load a regular commercial 12-or 20-gauge round into one of these guns under any circumstances as the throat chamber necks down after an inch or so to a more narrow gauge. Some have mentioned using short shells such as Aquila’s 1.75-inch Mini’s after modifying the firing pin, but this is inadvisable at best and these guns are primarily regarded as unshootable due to this. 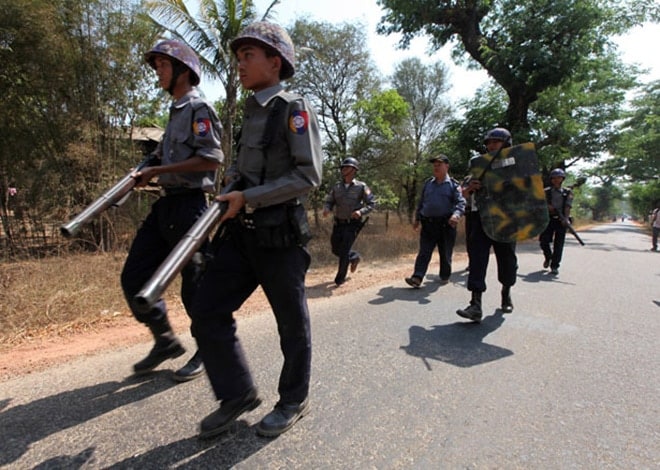 The ammunition has been out of production by Kynoch for some decades and what is out there is antique stuff that is sold for collection rather than for putting down riots or local riff raff. The British always meant that these rounds would be hard to find unless you were a colonial power on good terms with them and as you can tell, we had a falling out here in the States with mom.  Some US companies such as Rocky Mountain Cartridge Co sell the brass to reload these oddball rounds and there are the occasional custom gun makers who will take on the task of chambering Greeners to accommodate standard rounds. 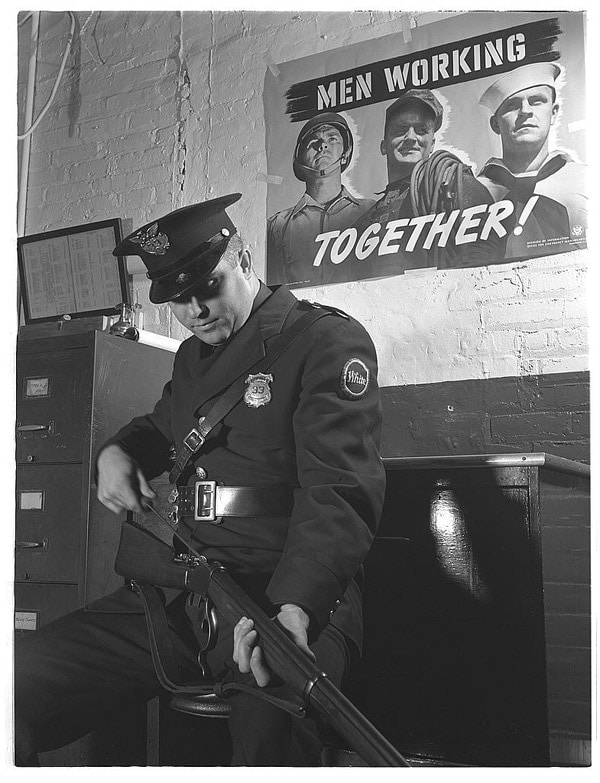 There are however a few of these guns that came in ‘regular’ chamberings. The Greener Police Shotgun was imported and sold in the States during the 1930s, chambered in standard 12 gauge with 2.75 inch shells. These guns were marketed for security guard and corrections applications and some of these nice old guns pop up in pawnshops from time to time. Imported MkIII guns with Hong Kong Police (HKP) marks also have been found in 2.75-inch chambering.

With all that in mind, if you were looking for a funky old wall hanger, you would be hard-pressed to find one neater than a Greener.