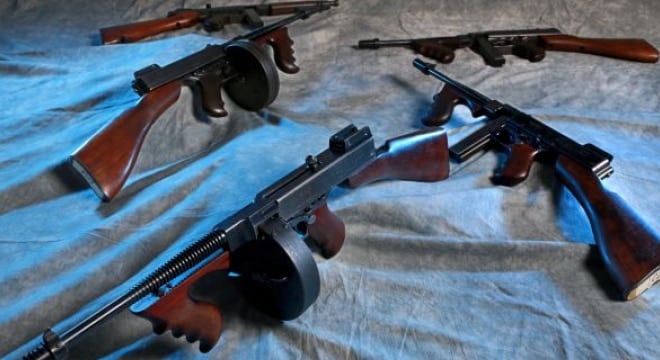 The St. Louis Metro Police Department is parting with most of its huge and historic Thompson submachine gun collection in a move to get a good deal on new duty guns.

Twenty-seven of the city’s 30 Tommy guns will be sold to Midwest Distributors for $22,000 a piece, the St Louis Post-Dispatch reported. All told, the Kentucky-based firm will pay $618,500 for the transferrable .45 ACP s sub guns and some other surplus weapons. This is on top of $597,000 paid by Minneapolis-based Bill Hicks & Co. for 1,748 used Beretta handguns currently carried by the department.

The money will go to offset the cost of new Berettas at $450 a pop to equip every officer with as well as a quantity of AR-15s to be used as patrol rifles.

“The original reason to sell the weapons was to purchase new duty weapons, and we did so well on the sale, we will be able to purchase rifles as well, by our own actions without using any budget money,” SLPD’s purchasing manager, Carol Shepard, told the Post-Dispatch.

The city has been flirting with selling the Thompsons, in storage since the 1960s, for a half-decade. The guns are the remnants of up to 75 acquired by the department to equip special units fighting organized crimes and bootlegging operations during the Prohibition era.

As noted in a previous Guns.com report, the stockpile was valued at $770,000 in 2012 and included 29 guns held at the city’s armory, as well as one that has been housed at the crime lab for ballistics testing. The collection varied widely from a pair of early 1921 Colt made guns, each appraised at $31,000, to a World War II-era Auto-Ordinance/Savage M1 from 1942, valued at a bargain of $14,000.

In recent years several agencies have liquidated their stocks of aging Tommy guns including a Pennsylvania town who sold their vintage Colt Overstamp on Gunbroker in March for $29,000 and a police department who moved to swap a pair of Thompsons for 88 newer semi-auto Bushmasters.

In 2015, the town of Kinston, North Carolina, who had picked up an Overstamp to ward off possible tobacco payroll robbers in 1935, sold their gun for $36,750, which is about average for the model.

Two of the guns from the St. Louis armory will be saved by the city for posterity and put on display at the crime lab.