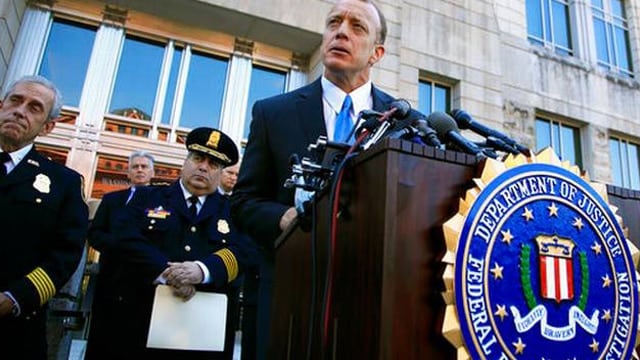 Timothy Slater, a FBI special agent-in-charge for the Washington office, briefing the media Wednesday about the investigation into the shooting at a Congressional baseball practice in Alexandria, Virginia. (Photo: Associated Press)

The FBI said Wednesday the gunman responsible for the shooting at a Republican baseball practice that injured a Congressman and three others acted alone and suggest the attack was not terror but rather a spontaneous act of violence.

The FBI offered little insight into the gunman’s motive other than to say 66-year-old James Thomas Hodgkinson “was struggling with a lot of aspects of his life,” said Timothy Slater, an FBI special agent-in-charge at the Washington field office, during a press conference.

Slater said Hodgkinson displayed “just a pattern of life that things weren’t going well” such as unemployment, diminishing savings, and a struggling marriage. But, according to Slater’s statement, it does not appear Hodgkinson had been planning his attack.

“I think he — by his posts on social media — he spoke a lot about anti-Republican rhetoric. I can’t speak to exactly what he was thinking at the moment or his motive, but I think as we continue to look at his communications and look at his online footprint, I think we’ll have a better indication of maybe what his thoughts were closer to why he did (opened fire),” Slater said.

The FBI clarified its investigating the shooting as an assault on a member of Congress and an assault of a federal officer. The Bureau also released a statement detailing the timeline from when Hodgkinson left Belleville, Illinois, for Washington, DC, in March, between then and the shooting, and insight into his personal history.

According to the FBI statement, Hodgkinson had been living in his car while in the Washington area and frequented the YMCA in Alexandria, Virginia, which is the same location of the Congressional baseball practice. He had also rented a storage facility beginning in April 16 where he stored a laptop computer, more than 200 rounds of ammo, a receipt from November for an SKS rifle and accessories. Up until the shooting, he visited the storage space 43 times.

Through an analysis of witness testimony and Hodgkinson’s electronic devices, investigators learned Hodgkinson had been visiting tourist sites in Washington like the National Mall and various monuments. At some point, he visited Sen. Bernie Sanders’ office as a tourist. Then, on April 15, he took pictures of the Eugene Simpson Stadium Park, which is where the practice was held, but investigators do not think the photographs represent surveillance of intended targets.

On June 12, Hodgkinson sent a message to a family member in Illinois saying he would be returning home. The night before the shooting, Hodgkinson visited locations with free WiFi to search on his computer directions from Alexandria to his home in Belleville and the “2017 Republican Convention.” He also checked a financial account, Facebook and recent headlines.

Some time later, Hodgkinson exited his car, parked in the YMCA parking lot, with an SKS rifle and a holstered 9mm handgun. He approached the baseball field and opened fire toward an area where members of Congress and staffers were standing. Two Capitol Police special agents engaged him and Alexandria police responded to the scene. Hodgkinson was down by 7:14 am.

The victims included the House Majority Whip Steve Scalise, of Louisana, who was shot in the hip and went to the hospital in critical condition; a Congressional aide; a Tyson food lobbyist; and a U.S. Capitol Police officer assigned to protect Scalise.

Slater said Hodgkinson fired 60 shots — 50 from his SKS — from the third base side of the field, but the FBI does not know if he had a specific target. Hodgkinson never said anything during the shooting or after, before he died. He added Hodgkinson had a list containing the names of six lawmakers, but investigators have not found any evidence that it was a hit list of any sorts. However, the FBI declined to release those names at this time.

“If you look at his pattern of life and what he was doing on his laptop and social media accounts, there’s no indication that that was a list of targets or there was any threats associated with the names on the list,” Slater said, adding investigators did not find evidence that Hodgkinson searched for details about the practice.

Tracing his online activity, “Hodgkinson made numerous posts on all of his social media accounts espousing anti-Republican views, although all the posts reviewed thus far appear to be First Amendment-protected speech,” the FBI statement says.

According to the statement, Hodgkinson bought his SKS rifle in November, after the election, from an licensed dealer in Illinois. He modified the rifle with a folding stock and to accept detachable magazines. He bought his pistol in 2003.

Before traveling to Washington, local law enforcement in his hometown addressed noise complaints because he had been practicing shooting on his property, but he had not violated any local laws. Also, his criminal record included a charge of domestic battery in 2006.