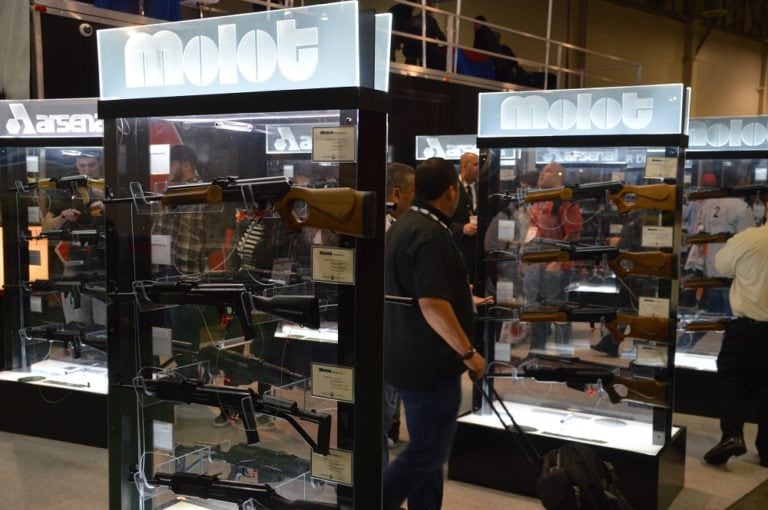 The Russian firm of Molot-Oruzhie, who export their popular line of VEPR rifles to the U.S., is now the subject of official sanctions. (Photo: Chris Eger/Guns.com)

The U.S. Treasury Department on Tuesday added VEPR firearm maker Molot to the growing list of sanctioned Russian companies and individuals involved in the conflict in the Ukraine.

The announcement this week included more than three dozen people or entities noted as directly or indirectly contributing to the conflict area ranging from Ukrainian separatists in the so-called Republic of the Crimea to hotels and holding companies. Russian firearms and munitions maker Molot-Oruzhie, which exports semi-automatic firearms to the U.S., was named as evading earlier sanctions imposed in 2014 on similar companies such as Kalashnikov.

“In 2016, previously-designated Kalashnikov Concern advised a foreign company to use Molot-Oruzhie, OOO to falsify invoices in order to circumvent U.S. and EU sanctions,” the notice says. “Molot-Oruzhie is being designated for operating in the arms or related material sector of the Russian Federation and for acting or purporting to act for on behalf of, directly or indirectly, Kalashnikov Concern.”

The announcement came the same day President Trump welcomed Ukrainian President Petro Poroshenko to the Oval Office, with both leaders voicing solidarity and cooperation at an afternoon press conference.

Speaking to Guns.com earlier this year, Molot officials were working hard on extending their exports to the U.S., hopeful that the new Trump administration would be friendly to lifting some sanctions on Russian-based companies. Russian-made firearms were popular export items to the states until the conflict in the Ukraine and the resulting international backlash triggered a host of official embargos.

Per figures from the International Trade Commission, 204,788 firearms of all kinds were imported from Russia in 2013. This figure plunged to just 9,556 in 2015 — mainly from Molot.

For its part, Kalashnikov Concern shipped the last of their Russian-made rifles in the pipeline to the U.S. in late 2014, while a domestic company, Kalashnikov USA, is releasing their own AK-style firearms on the market.

Meanwhile, further sanctions could be in the works with a bipartisan Senate bill punishing Russia for involvement with the U.S. 2016 elections now navigating the House. That proposal would target individuals and companies involved in “malicious cyber activity” or in supplying weapons to the government of Syrian President Bashar Assad.