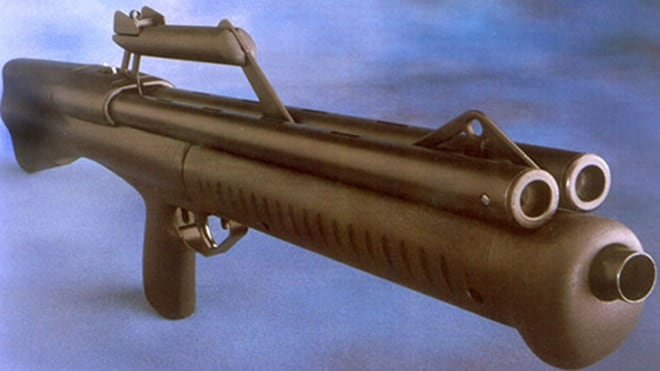 South Africa has had a long history of armed conflict and, as such, has an equally long history of innovative local weapons designs — so innovative in fact, they’re solution based designs have been copied by manufacturers internationally. With limited budgets South African arms makers have a reputation of doing “more with less” and a good example of this (and one in which we can see elements of Kel-tec’s latest combat shotgun, the KSG) is the NeoStead 2000.

Combat shotguns have been standard issue in militaries around the world since World War 1, when the slam fired Winchester Model 97 fought the Thompson submachine gun hard for the title of trench sweeper.  Shotguns are brutally effective in close quarters battle scenarios, especially inside structures (e.g. in door breaching, room clearing et al) as well as being ideal for POW escort. Security and police forces have different rules of engagement than troops, though similar needs, and combat specific shotguns wasted no time cementing their place in these arsenals as well. Security forces quickly found that the most useful combat shotguns were the most compact ones available with as large a magazine as possible. It was with these parameters that a pair of engineers began to design a revolutionary new shotgun. Starting in 1990, two South African firearms engineers, Tony Neophytou and Wilmore Stead, began working on a radical shotgun design to fix the problems addressed above. Bullpup firearms, in which the action is located behind the trigger group and alongside the shooter’s face so there is no wasted space in the buttstock, had been around for almost 100 years and the previous, most well known bullpup layout shotgun, the 10 pound, 26 inch overall High Standard Model 10 had been designed (albeit unsuccessfully) in the 1950s.

Neophytou and Stead took this bullpup concept and added more teeth. Instead of one tube under the barrel, they put two six shot tubes over the barrel giving their shotgun a capacity of 12 rounds in the tube and one in the chamber. Through the use of more modern polymers than High Standard had in the 1950s, the NeoStead design came in at two pounds lighter while having about the same overall length as its predecessor.

And in a move completely different from any other shotgun at the time, the pair gave their design a fixed breechface and moved the entire barrel forward to cycle rounds manually through a pump action. This pump action moves the opposite of how traditional shotguns operate: in other words, instead of racking the pump back and then forward to load a round, the NeoStead pumps forward and then back to load and fire.

After 10 years of development and testing, Truvelo Armory of Midrand, South Africa placed the NeoStead into production in 2001.

The NeoStead has been in production in South Africa and has enjoyed steady adoption by special operations units around the world. While it has been exported to South America and Europe, it is currently not approved to bring into the US for sale since, according to the ATF, it serves ‘no sporting purpose’.

When compared to the Kel-Tec KSG or Turkey’s UTAS UTS-15 Shotgun, the world’s other two bullpup shotgun designs currently in production, the three seem very similar in layout. The Kel-Tec, designed a decade after the NeoStead, is slightly smaller (26.1-inches overall and 6.9-pounds unloaded) and boasts a 14+1 capacity. The KSG also uses a more traditional (and familiar to US users) pump-action.

However the KSG runs almost $800 if you can find it and the imported, “KSG luxury model” UTS-15 starts at $1200, which makes the prospect of a US manufacturer making the NeoStead on license here in the States not just a viable option but perhaps a necessity as hard to find imports can go for over $2000. For now, the closest you can get to this South African scattergun in this country is in a video game.