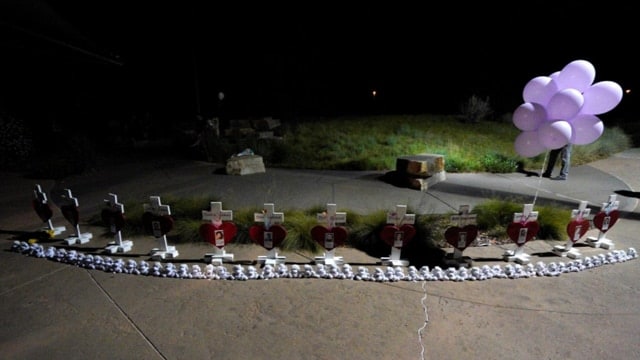 Crosses for those killed in the Aurora movie theater shooting are set up at midnight vigil marking the fifth anniversary of the tragedy. (Photo: Rick Wilking/Reuters)

A crowd of 100 family and community members gathered Thursday at city hall in Aurora, Colorado to remember the victims of the 2012 movie theater shooting.

July 20 marks five years since a gunman opened fire during a midnight screening of “The Dark Knight Rises,” killing 12 and wounding 70 others. At 12:38 a.m., the exact moment the shooting began, the crowd began its candlelight vigil with a a moment of silence, surrounded by wooden crosses.

“We are part of a family, we never have to say anything about it. It’s just there,” Jansen Young told Reuters. Young’s boyfriend, Jonathan Bunk, died shielding her from the gunfire.

“The thing I see after five years is the resilience of this community,” said Aurora Police Department’s Jad Lanigan. “In Colorado we’ve had our fair share of tragedies but we always bounce back.”

The 7/20 Memorial Foundation sponsored the vigil Thursday as it continues fundraising for a permanent memorial.