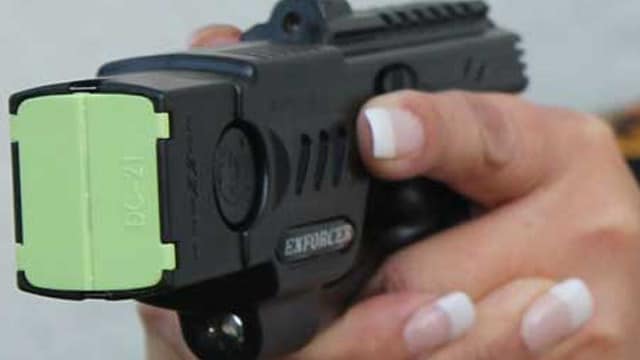 The company whose name has become synonymous with the less-than-lethal stun gun announced Monday that it has won a patent infringement lawsuit against a copycat company.

Axon, formerly known as Taser International, sued Florida-based Phazzer Electronics in March for making and selling similar stun guns to those in its own line, which use conducted electrical weapon technologies, according to the court complaint.

The U.S. District Court for the Middle District of Florida on Friday placed a permanent injunction on the sale of Phazzer stun guns, Axon announced.

Axon called the ruling a huge win. “We aggressively defend our intellectual property rights and have a proven track record of success in litigating these cases,” said Doug Klint, Axon general counsel.

Klint said the company successfully prosecuted other infringement cases against Stinger Systems in 2010 and Karbon Arms in 2014 prior to this case.

“Willful infringement of our weapons technology will never be tolerated, and we will not allow competitors to trade on TASER’s goodwill and reputation for quality,” Klint said.

Also named in the lawsuit was Sang Min International, a Taiwan-based company, that Axon alleges used Phazzer as its main U.S. distributor of stun guns.

Axon said Phazzer used “confusingly similar” markings to those on its federally-registered mark. According to Phazzer’s own website, its less lethal weapons cartridges are compatible with several Taser models. Phazzer also includes a disclaimer at the bottom of its site denying affiliation with or endorsement from CBS Studios, the Star Trek franchise and its famed phaser gun, as well as the Taser brand.

Axon has supplied 17,800 law enforcement agencies in 107 countries with Tasers, the company claims.