Since its introduction in the United States, Glock has largely set the standard for duty weapons carried by law enforcement officers and over three decades the brand has become synonymous with the word “gun.” But within that ubiquity there is a rarity: the Glock 18, a machine pistol.

While there are plenty of discussions about full-auto Glocks, many of which were converted with third-party components, the Glock 18 is the gun maker’s full-auto model.

Obtaining information on the Glock 18 requires some deep Googling — we’re talking page 13 scrolling — in which you’ll wade through a hodgepodge of results like random videos of shooting demos, forum discussions, iterations of wiki articles, airsoft pistol reviews, and critiques on weapons in the “Call of Duty” video game. Making things more confusing, it isn’t listed on Glock’s website either.

But Guns.com attended a brief demonstration at Glock’s instructor range in Smyrna, Georgia, last week in which we were shown proper techniques for firing the Glock 18 and enough insight to pique our interests.

“It’s a special weapon for special tasks,” said Chris Edwards, a Glock instructor who has taught Glock classes for the company starting with the Gen 1 model. “The history is originally Mr. Glock designed this for two reasons. The first was so he could test the pistol and the components faster. This was way back in the 1980s.” 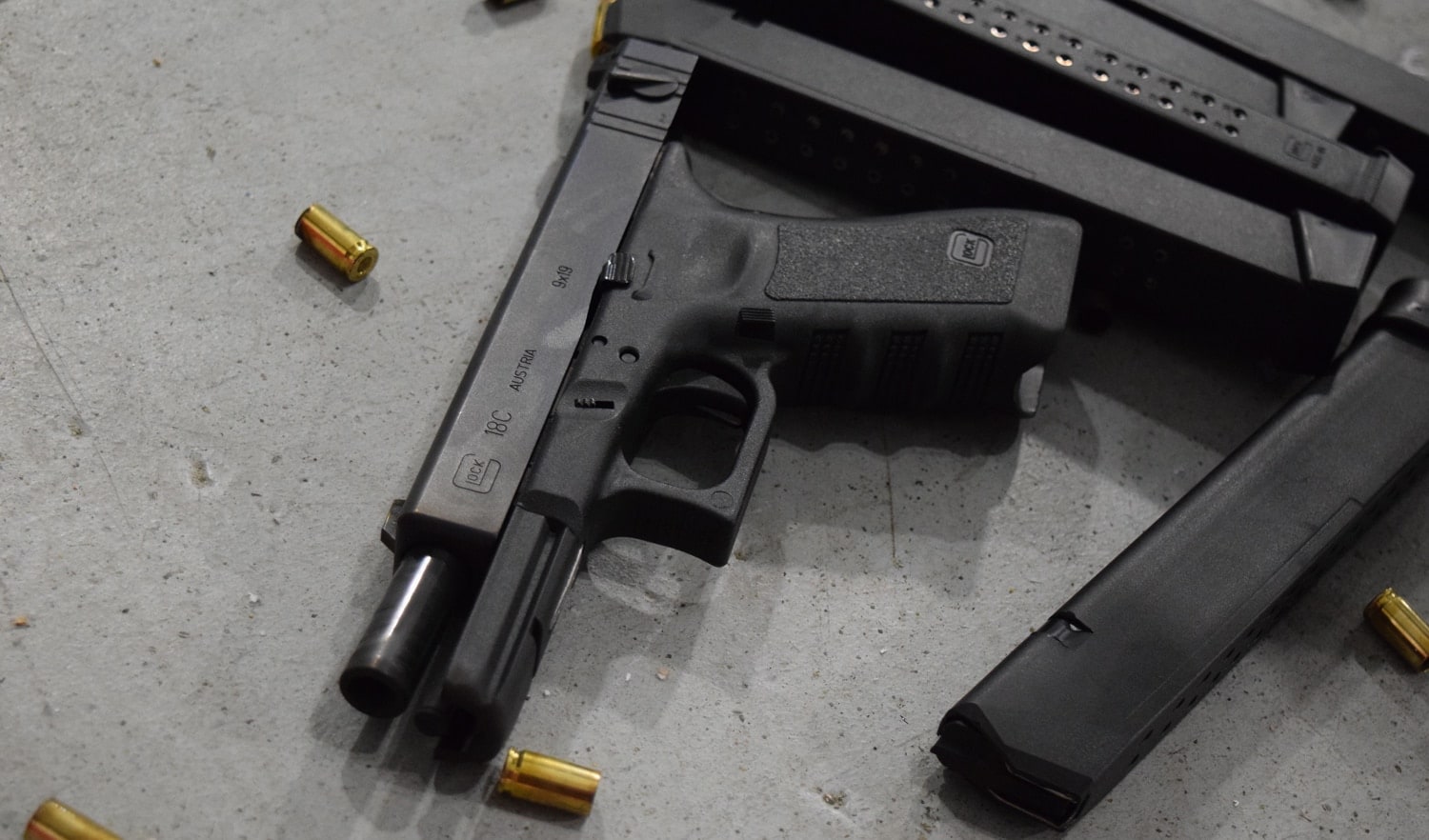 As an engineer and military contractor in Austria, the company’s founder Gaston Glock based the pistol design on the desires of military leaders. Since he wasn’t a gun maker, he applied his intellect and time to crafting a handgun from scratch.

“After he designed it and built it, he realized there was a certain place for this kind of weapon. Anti-terrorist kind of duties, maybe executive protection,” Edwards said.

Many who write about the Glock 18 note its use by Austrian special forces or Iraq dictator Saddam Hussein’s possession of one when he was captured in 2003, but that’s about where the list of known users ends. Fewer than a hundred are sold each year and only to police agencies.

“The sales are restricted by Glock Inc. to basically organizations — military organizations or police departments. There are some — literally a handful — that are in collectors’ hands. But there’s very few out in the wild so to speak,” Edwards said.

When asked why they’re not sold in the consumer market, the company explained federal law prohibits the transfer of machine guns manufactured after 1986. But it hasn’t prevented the company from using the item as a marketing tool, showing off the handgun design’s capabilities under extremes for potential contracts and fans. 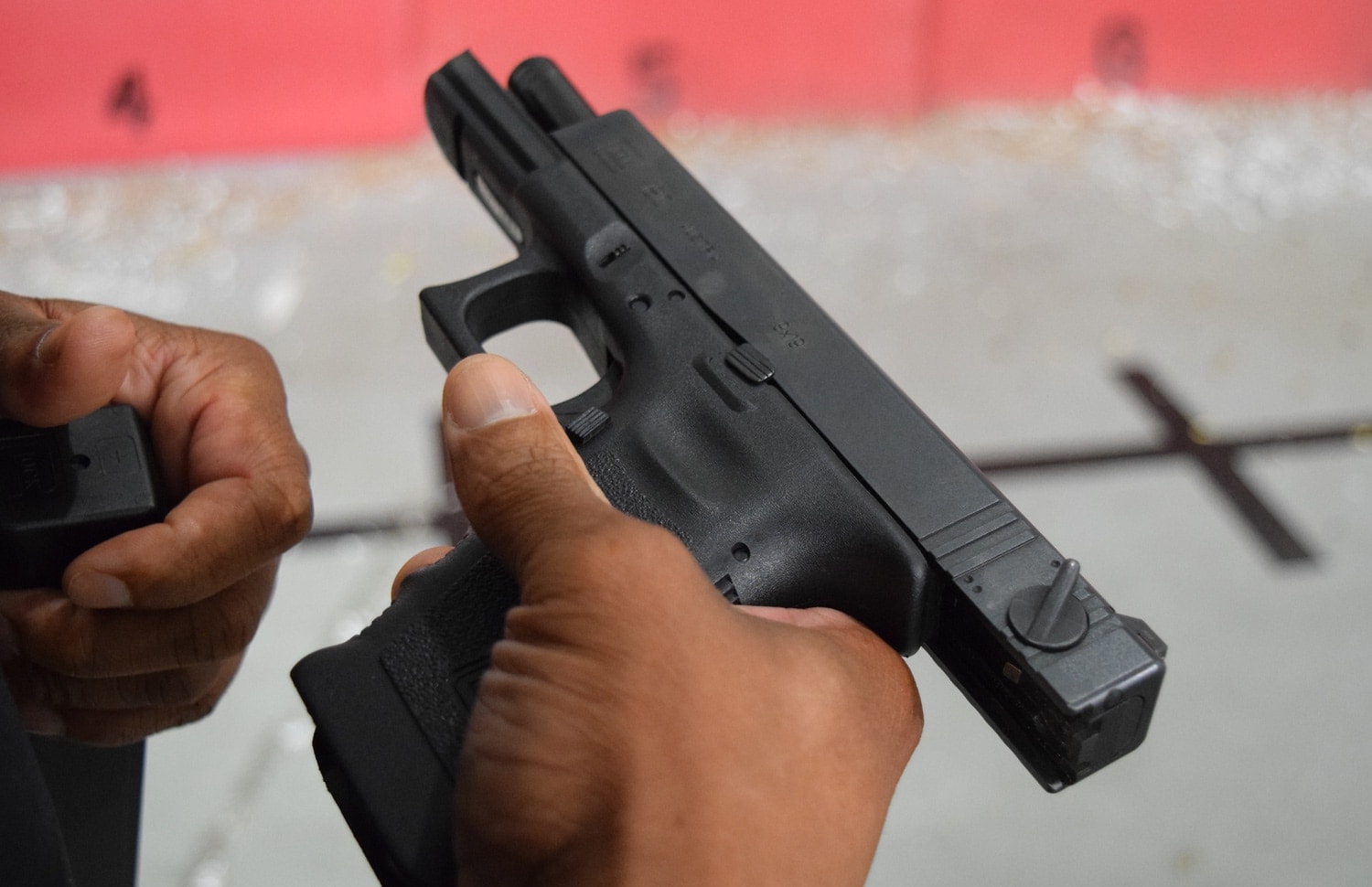 Glock manufactured machine pistols are marked “18” or “18C” on the front of the slide and have a two-option selector switch. (Photo: Daniel Terrill/Guns.com)

The machine pistol shares many similarities with the 9mm Glock 17 (and all other Glock pistols for that matter), but the biggest aesthetic difference is the selector switch on the slide. It rotates between a single dot signifying semi-auto mode and two dots on the other end signifying full-auto mode.

Unlike a submachine gun, the Glock 18 lacks the heft and features typically used to control the high rate of fire. The specs sheet provided to Guns.com lists the Glock 18 with similar dimensions — not identical — to the Glock 17. It has a shorter slide at 7.33 inches, a slightly longer height at 5.9 inches, and a lighter weight at 20.7 ounces. Also, the Glock 18 is priced at $557.

In semi-auto mode, the Glock 18 fires one shot at a time, but in full auto it’s capable of firing 1,200 rounds per minute. Putting it in perspective, Edwards explained that it takes approximately 1.5 seconds to empty the pistol’s 33-round magazine. But he also warned that many underestimate the gun’s recoil as he pointed to the holes in the ceiling.

Edwards advised shooters maintain a tighter than usual grip and to lean forward aggressively when shooting the machine pistol. “When we teach the course, we are trying to teach people burst fire. This is not a two-shot burst or three-shot burst. This is your burst control,” Edwards said as he simulated a trigger pull with his finger.

Glock Professional training manager Scotty Banks performed a step-by-step demonstration. “In semi-automatic mode, it shoots and feels like the Glock 17. But once I rotate the selector switch down in fully automatic mode, I’m going to modify my stance slightly,” he said as he adjusted his feet. 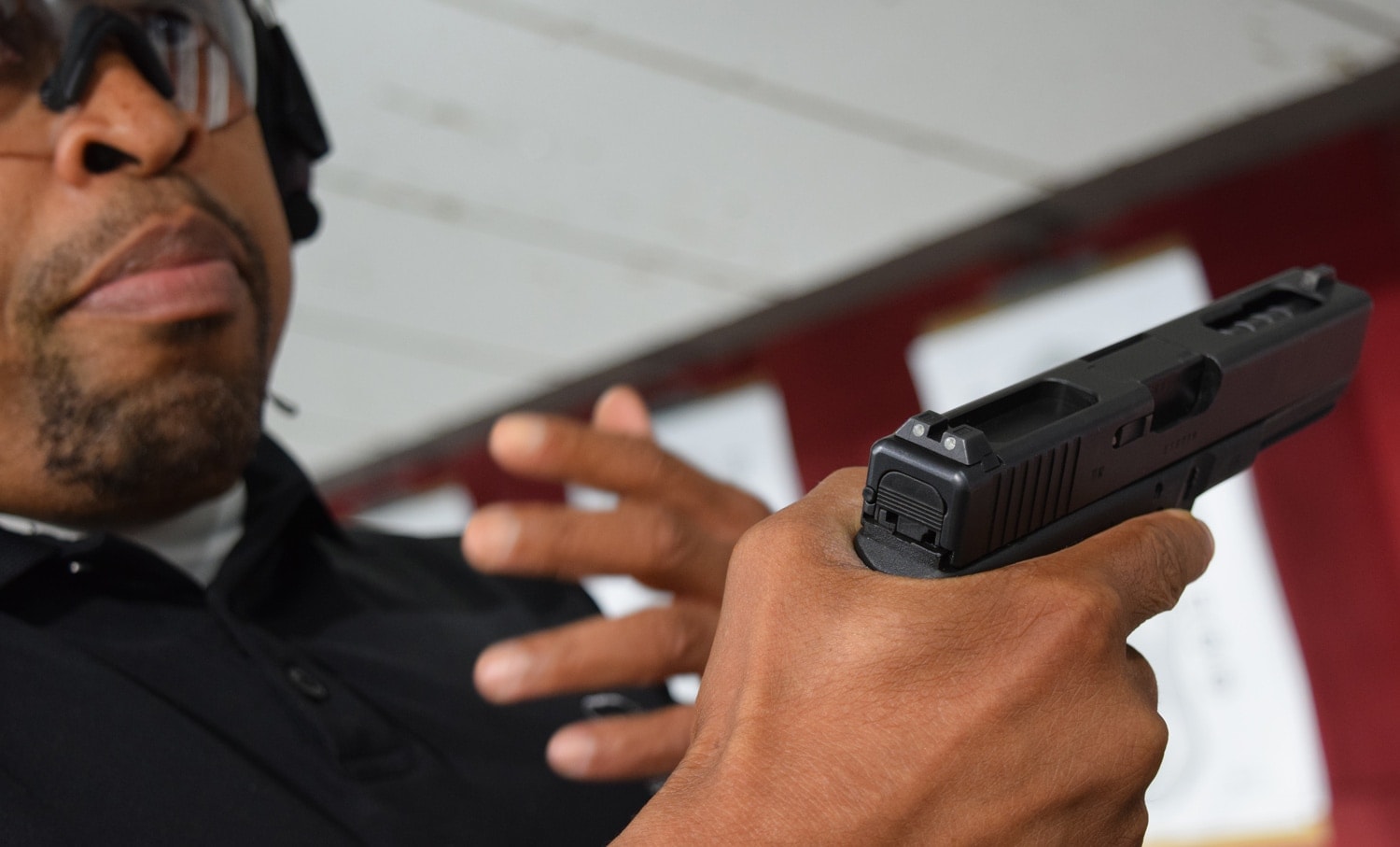 The Glock 18C has been modified from the G18 version with cut outs on the slide. (Photo: Daniel Terrill/Guns.com)

“Now the gun will tell me whether or not I’m shooting aggressive and if my grip is good,” he said. “So I’m going to slightly step back a little, I’m going to lean into it, so [that] I’m going to lean really into it and get my weight behind the gun. So I’m pushing on the gun as the gun is pushing against me. It helps the gun to run.”

On the 3-yard line, visitors tried to follow instructions. Although they’d grip tighter than normal and aggressively lean forward, more often than not Edwards would place his hand on their back, helping them control the recoil. After one or two bursts, the shooter would then empty the magazine with one, long burst. I was no different.

My experience shooting the Glock 18 took roughly 30 seconds and included two single shots, six bursts, a failure-to-extract followed by a Face/Off joke and one more failure to extract. Following their instruction, the muzzle flip was manageable, but nonetheless, it could be a dangerous experience if the user had not consciously prepared for it.

Edwards warned after half dozen or so people, including myself, emptied their magazines to be careful because the pistol gets hot — really hot. So hot in fact that it could burn your skin. After firing off a 100 rounds, the gun literally dried up resulting in trouble ejecting spent casings. Edwards sprayed it with lubrication and like any other Glock, it kept plugging along.