In six weeks of range time at Quantico, candidates to become special agents with the Federal Bureau of Investigation burn through cases of ammo — and concentrate on the new G19M.

As part of the FBI’s Becoming an Agent series, the Bureau spends a few minutes in the above talking to Rhys Williams, a special agent and instructor with the FBI Academy’s Firearms Training Unit. According to Williams new agent trainees ranging from gun neophytes to those with prior military experience all get a lot of trigger time, concentrating on the G19M.

The new Glock even gets a gratuitous panning close-up… 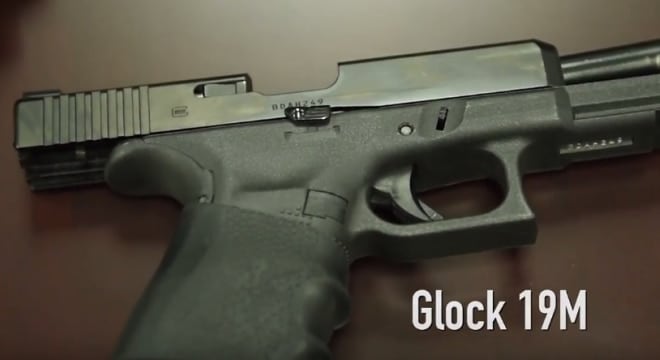 The 19M drops the finger grooves yet FBI still uses a $8 Hogue slip on grip to get them back! What the what!?

Williams says the each student puts about 4,000 rounds through the 9mm Glock during training. The Remington 870P gets anywhere from 120-150 shells cycled and the Colt pattern carbine (with training guns sporting a snazzy yellow M4 butt while another gun has a Magpul CTR) runs about 620 to establish proficiency.

“After graduation, as soon as they leave the front gate of Quantico, they have to be prepared to defend themselves or more importantly defend the lives of those they have already sworn to protect,” says Williams.