4 Folding submachine guns we'd love to get our hands on 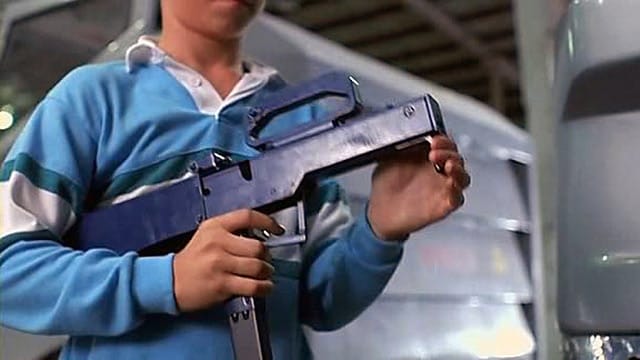 Submachine guns have been around for the better part of a century. They are the intermediate go-to firearm between a handgun and a carbine and have multiple niche uses in military, law enforcement and personal defense scenarios.

One isolated branch of subgun development however has been in the arena of the inconspicuous folding submachine gun — and it is indeed one weird branch of firearms.

In the mid-1970s, Francis J Warin hit upon an idea for what he called a ‘stealth gun’ that could be deployed by a seemingly unarmed individual. Folding in half to form a non-threatening box shape, it could be unfolded to expose a hidden submachine gun. Warin patented his ideas and approached ARES to produce the weapon. 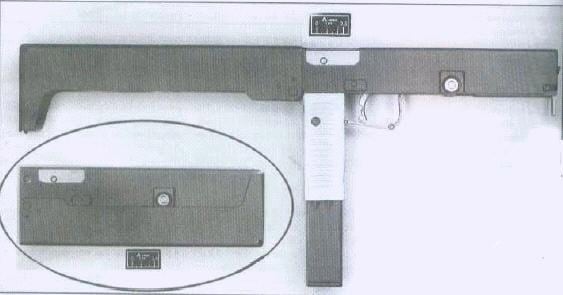 Eugene Stoner, father of the M-16, was president of ARES at the time and he is often mistakenly credited with the weapon’s design. Maybe Warin would be glad he wasn’t, as the weapon was a non-starter. It was rather complicated with a multi-part bolt. It could fire semi-auto, full-auto at 650-rounds per minute, or in a three-round burst. It weighed 4-pounds loaded with a German MP28 magazine, stretched 20.6-inches unfolded and 10.6-inches folded. It had no sights and originally the design had no trigger guard.

It never went into production and only two prototypes were made before the project was abandoned.

A fellow by the name of Utah Connor built a folding subgun very similar to the ARES disguised as a radio (complete with collapsing antenna) in the mid-1970s. The concept was that plainclothes police officers and security personnel could sit and chill out with the ‘radio’ at their feet or on a table and, with practice, deploy it in 2-3 seconds. Connor called his one of a kind weapon the “Undercover 9” or UC-9. 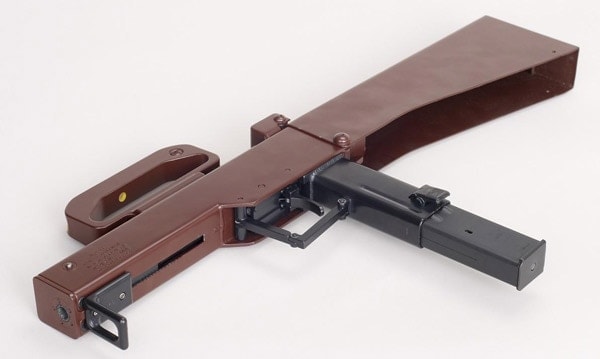 Class II dealer Dave Boatman joined forces with Connor and together they produced a handful of these guns in Boatman’s shop under the name of the M-21. The gun used a simplified telescoping bolt, like the Uzi, but fired at a much higher rate of fire — 895 rounds per minute. The full-auto only gun weighed 7.5-pounds loaded with a 32-round Uzi magazine with a length of 20.5-inches unfolded and 10.5-inches folded. They made them with either black, blue, yellow, tan, or red cases to give the end-user many choices. 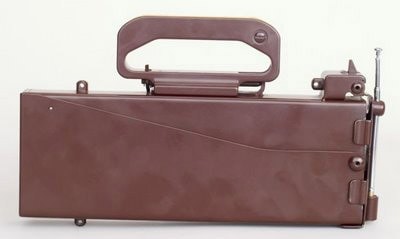 The 1986 Hughes Amendment, which largely banned machine gun sales of certain types, ended the production line. There are a few of these floating around today as they are all pre-1986 and usually transferable through a Class III dealer with the right tax stamps changing hands. The downside is that they cost around $10,000 if you can find one. Another options is a company called M6 who found a batch of 76 pre-1986 UC-9 receivers and completed some weapons out as new/old transferable sub guns. These go for around $12,500. These are even offered with a more updated faux USB port to make it look like a media device, or an optional book spine for storage on your favorite bookcase.

The KBP Instrument Design Bureau in Tula (makers of most of the Soviet Union’s neat rapid-firing weapons) looked at the ARES and M-21 weapons in the early 1990s and thought a similar firearm, chambered in the Warsaw-Pact standard 9x18mm Makarov, could be very useful for internal security forces fighting a very dirty war in places like Dagestan and Chechnya. Keeping things simple, the KBP designed a folding gun that was full auto-only (at 700 rounds per minute) and that used a straight blowback action. Designated the PP-90, it was 4-pounds empty, 5-pounds loaded with a 30-round detachable box magazine. The gun folded to 10-inches, but when extended was only 20. Its barrel was threaded for a suppressor for those moments where you want to be a little quiet. 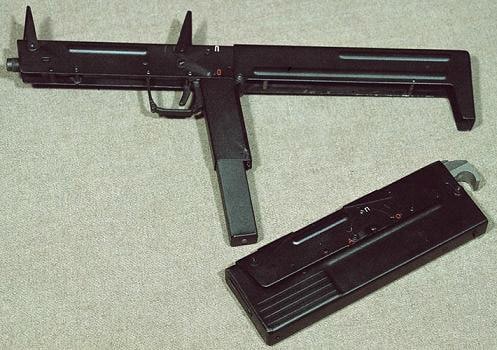 The Ukrainians, always looking over their border at what their “old friends” were up to, came up with a very close knock off called the Goblin. The KB-ST design bureau’s Igor Alekseenko in Kiev added a folding rear sight to their version, the capability to fire 9mm Luger (9x19mm) and a very short fore grip. Officially, the Goblin has never been placed in production. The Russians, also known for looking over their border, retaliated with a 9x19mm version of their PP-90, which is called the PP-92.

In 2008, Magpul Industries — well known for their tactical training programs and AR platform accessories — announced they were working on a folding submachine gun. Re-imagining the old M-21, they threw away the previous guns’ 1980s portable boom box disguise and updated the look to that of a laptop battery. 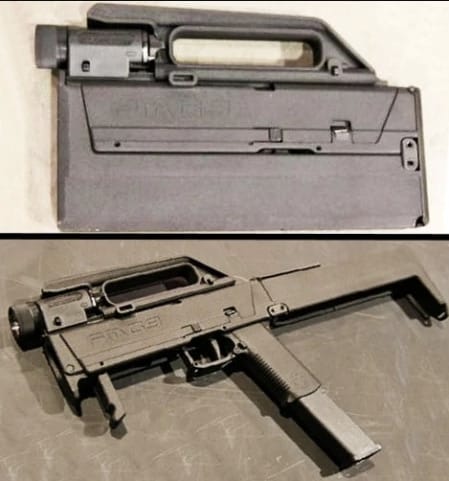 Dubbed the FMG-9, the prototype weighed just over a pound unloaded and was 10-inches folded, 20-inches extended (we’ve seen that length spec somewhere before). Using a Glock 17 action, it could accommodate standard 17 or 33 round 9mm luger mags. To make matters even more interesting, the similar-sized and select-fire Glock 18 (G18) action could be used. Magpul brought it to the SHOT Show in 2008 but the only production versions we’ve seen thus far have been seen in the hands of airsoft players.

With such modern and compact subguns as the H&K MP5K, the MAC-10, and the Micro-Uzi, it’s odd that so much lean muscle tissue keeps being expended on folding stealth guns. However, you can rest assured that the last chapter hasn’t been written yet on these devices. Watch this space for further updates.