If you have ever fired a blackpowder muzzleloader, you’ve experiences the mini-fireworks show that results when the powder ignites and you instantly become shrouded in a cloud of smoke. Now imagine that multiplied by a factor of seven. As strange as this may sound, you have just visualized a Nock Volley gun.

Naval warfare in the 1700s revolved around sailing ships that would close and board enemy vessels so that their huge crews, sometimes over 800 sailors, could fight it out at close-quarters. Besides minimizing overall casualties, this strategy had strong financial incentives for the attacking party since sinking an enemy battle ship usually meant losing the spoils of war — guns, gold and other trade goods — to the ocean floor.  Accordingly battles at sea were decided by musket, blunderbuss, and cutlass at bad breath range more often than by cannons. And this type of warfare, characterized by close combat with a limited ability to retreat, spawned the need for a different type of firearm…

The design of the Volley Gun

Though the volley gun design — itself just a simple arrangement of multiple barrels fired all at once by a single mechanism — goes back as far as the 14th century, an English engineer named James Wilson, Esq, developed a multi-barreled firearm in the mid-1770s that was a vast improvement on these devices usability in the field. The single weapon had seven .60-caliber barrels, one in the centerline with the other six clustered and brazed around it like a handful of flowers. Muskets of the day often had very long 30 and even 40-inch long barrels, but the Volley gun used relatively short 20-inch long tubes. Originally rifled, after the first few were made the Tudor period Board of Ordnance tweaked the design to use smoothbore tubes without rifling as the gun would no-doubt be used at close range. 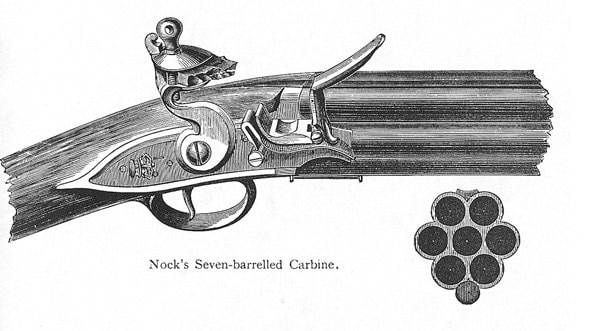 A single stock, forearm, trigger, and hammer were married up to this bundle of barrels to make the final weapon. With a squeeze of the trigger, the flintlock dropped down and fired the centerline “number one” barrel. It was the ignition of this first round that set off barrels two to seven at roughly the same time. This phenomenon, known as chain-fire, is every shooter that has ever used a black powder revolver’s nightmare. Nevertheless, with a dedicated barrel for each charge, the volley gun has a slightly higher margin of safety. Recoil was stout on the 37-inch long 11.5- pound weapon but not impossibly so. Even with a trained crew, it took several minutes to load and created tremendous muzzle flash. 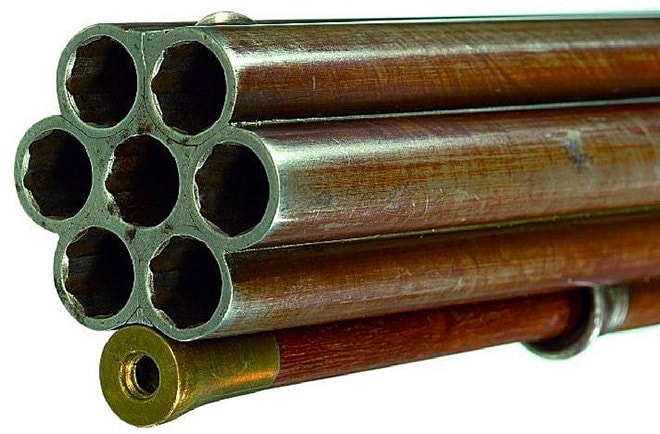 The gun was placed into production with the well-known firm of Henry Nock of London in 1780, and by 1787 a total of 608 were manufactured in at least two different series. Part flame-thrower, part sawed-off shotgun, all crazy, the Nock never gained widespread acceptance. The weapon was in the Royal Navy’s arsenal throughout the US Revolutionary War and the Napoleonic Wars but did not seem to play a notable factor in either. Interestingly enough they formed part of the armament of the HMS Pandora on its 1791 manhunt for the munitieers of the famous HMS Bounty. By the 1850s, they were withdrawn from service entirely.

Upon his death, Nock passed on the family business to his apprentice and son-in-law, James Wilkinson and today it survives as Wilkinson Swords.

Since only an estimated 608 original Nocks were produced and all are over two centuries old, vintage guns are rare in any condition. The last one to pop up for public auction was in England in 2011 and went for over $25,000 with several replacement pieces. 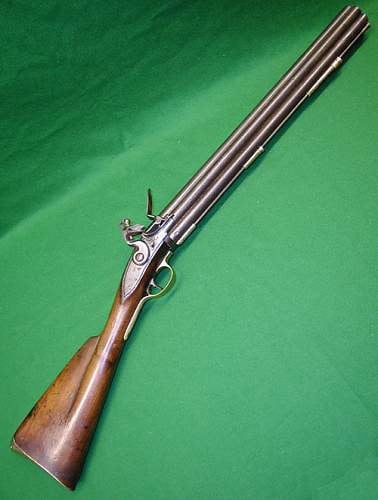 Nock gun on the auction block at Christie’s of London.

Now be advised that good old Mr.Nock made several other volley guns for fowl hunters for another 20 years and these go for significantly less. The best way to tell a real military Nock from a cheaper civvy is the military one will have the “Tower’ acceptance stamp and “GR” cipher for mad King George (remember him from the Boston Tea Party days?) as they were made during his rule for his Navy.

Reproductions have become popular, as the Nock has appeared in several films and series. These reproductions, mainly due to the cost of producing seven barrels, run much less than an original but are still pricey.

Nonetheless, if you want a giant pepperbox shotgun, you can’t knock the Nock.