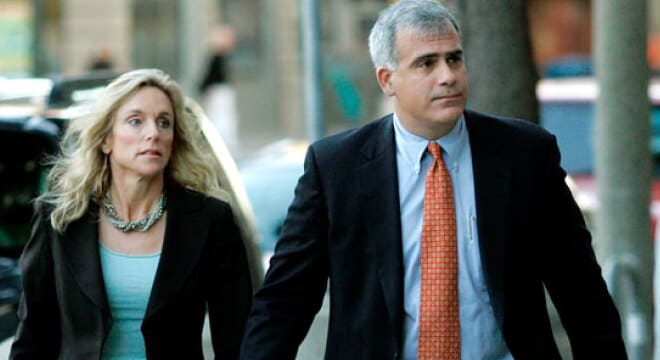 Gregory Reyes, in this file photo shown leaving the federal building in San Francisco in 2009 with his wife, is seeking his firearms rights restored. (Photo: Jeff Chiu/AP)

The former CEO of a tech company has filed suit in federal court arguing a ban on felons possessing guns should not apply to his crime.

Gregory Reyes, the first person convicted for fraudulent backdating corporate stock options, contends in a lawsuit filed Monday in U.S. District Court for the District of Columbia that his ban on gun ownership over business-related crimes is not in line with federal law.

The former CEO of Brocade Communications was indicted in 2006 on a series of conspiracy and fraud charges that eventually ended with 18 months in prison and a $15 million fine and well as settlements with the Securities and Exchange Commission.

Following his release from Taft Correctional Institution in 2011, a “Club Fed” prison named to Forbes list of “America’s 10 Cushiest Prisons,” Reyes has completed his probation and not been charged with another crime.

However, Reyes sought to buy a handgun with two different firearms vendors this month and was told that his history of being convicted of a white collar federal felony bars him from a legal sale. Under federal law, those found guilty of non-domestic violence-related crimes punishable by imprisonment for over a year can lose their gun rights.

The suit filed by Reyes attorney, Charles Cooper, argues that securities and accounting offenses are not expressly included under crimes that would bar firearms possession under federal law.

Cooper goes on to contend the crimes Reyes was convicted of “do not involve any violence or force, or any threat of violence or force, and his convictions provide no evidence or indication that he has any greater propensity for violence,” than a typical person convicted of other offenses excluded from triggering a suspension of gun rights.

As such, the suit characterizes a prohibition on Reyes keeping and bearing arms to be unconstitutional in view of his criminal record, and seeks an injunction on enforcement.

Ironically, Cooper, who earlier this year was thought a shoe-in for the job of U.S. Solicitor General, has been retained by long-time friend, U.S. Attorney General Jeff Sessions, as his personal attorney. Sessions is named in his official capacity as the defendant in the Reyes suit.