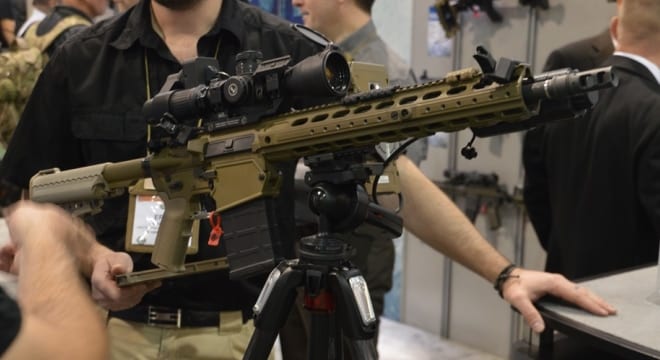 While gun and ammo makers looking to export may see as much as a 20 percent boost, decreased regulation on small companies could also be a result of ITAR changes (Photo: Chris Eger/Guns.com)

The ramifications of cutting away dense federal regulation on munitions controls could drastically increase exports while easing the load on small-scale gun shops.

The news surfaced from the Sept. 8 meeting of the U.S. Department of State-industry advisory organization, the Defense Trade Advisory Group, that the 1970s-era International Traffic in Arms Regulations could see major changes. Made up of defense and munitions industry leaders appointed by State, DTAG helps coordinate the efforts of the agency’s Directorate of Defense Trade Controls with the commercial sector.

Among the pending changes in ITAR reported by the FireArms Importers/Exporters Roundtable Trade Group and the National Law Review are that three categories of the United States Munitions List– those dealing with small arms including firearms, close assault weapons, combat shotguns and ammunition and ordnance– would be moved from the State Department’s control to the more relaxed purview of the Commerce Department.

The result after wading through the alphabet soup? Domestic gun and ammo makers looking to sell more overseas will likely find it easier to do so.

According to data from the Bureau of Alcohol, Tobacco, Firearms and Explosives’ latest Firearms Manufacturing and Exportation Report, which runs two years behind to protect trade secrets, U.S. gun makers shipped 343,456 firearms overseas in 2015, almost evenly split between rifles and handguns. This figure was down significantly from the 420,932 reported in 2014, which was a 20-year high.

While a regulatory change is big news for large companies, such a move could also bring relief to smaller shops who have been forced to register as ITAR manufacturers, a costly process that includes an annual $2,250 fee. Last year lawmakers backed an unsuccessful move to transfer the oversight of export in non-military firearms to the Commerce Department following a change at State that required companies and individuals who performed minor machine work on firearms such as threading barrels, magazine modifications and rechambering to register under ITAR even if they had no intention of exporting overseas, forcing some to halt gunsmithing services instead.

Further, current ITAR rules as enforced by the State Department have been the bane of 3-D printed gun instruction distributors.

The full details of the new regulations, still under review, could become public this fall before implementation in 2018.