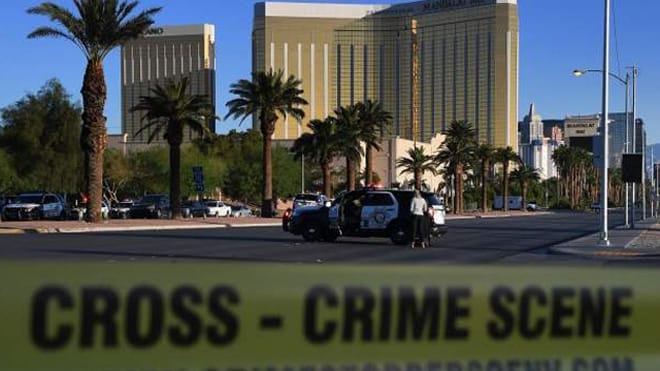 The crime scene outside Mandalay Bay after a mass shooting the night before. (Photo: The Mercury News)

Las Vegas police and the public in general are struggling to make sense of Sunday night’s mass shooting during a country music concert at the Mandalay Bay casino.

As authorities continue their investigation on gathering basic facts regarding the shooting, they also shift attention toward understanding the motive that drove gunman Stephen Paddock to shoot into a crowd from his hotel room on the 32nd floor and murder a staggering 59 people and injure another 527 others.

Clark County Sheriff Joe Lombardo called Paddock a “lone wolf” and said he is solely responsible for the shooting, but exactly why is unclear. Investigators have yet to uncover a manifesto or similar document like other mass shooters left behind, and journalists digging into his past have yet to find details pointing toward what drove him to commit such a heinous act.

What is known, however, is that after Paddock checked in to his suite on Thursday, he unloaded more than 10 large bags containing some 23 firearms — some of which modified for full-auto capabilities — loads of ammunition and other devices. Then, at 10:08 pm on Sunday, he smashed a window in his room and sprayed a crowd of some 22,000 people with bullets until a SWAT team breached his door a little more than an hour later.

The large crime scene coupled with Paddock’s vast estate has led investigators on a sprawling investigation, making it more difficult for authorities concerned with contributing to false or erroneous news reports. So, they’ve been slow at revealing information. But it’s unfair to say leads pursued by reporters are completely off. Mostly, authorities say, they want to confirm their own information before stating them as fact.

“I promise you the sheriff will provide that information when we have confirmed it,” said Todd Fasulo, Las Vegas assistant sheriff, during the fifth press conference of the day late Monday.

The investigation has brought detectives to five different locations: the hotel room, Paddock’s car, the venue, Paddock’s home in Mesquite and his other property in Reno. At the latter two, investigators found guns, ammo, explosives and computers, which could provide insight into Paddock’s reasoning.

Journalists have tracked down public records, neighbors and family to better understand what could have triggered the gunman to lash out violently. Reportedly, 64-year-old Paddock was a retired accountant who dabbled in real estate investing living in a retirement community about 80 miles outside Las Vegas. He liked high-stakes gambling and occasionally attended shows. He was twice divorced, had a pilot’s license and owned two single-engine planes.

Neighbors said he went out of his way to keep to himself. His noticeably distraught brother who lives in Orlando said there was no indication Paddock was planning or was capable of that sort of attack.

The closest thing to a criminal record is Paddock’s father, a convicted bank robber, had escaped from prison in 1968. The elder Paddock’s name was added to the FBI’s Top Ten Most Wanted list, where he was described as “psychopathic,” “reportedly has suicidal tendencies” and “should be considered armed and very dangerous.”

Paddock maintained no social media accounts or openly expressed overt political or religious views. Authorities also dismissed links to international terror groups and have been unable to connect him to domestic extremist groups.

A person who could give insight though is Paddock’s girlfriend, Marilou Danley, but what exactly investigators hope to learn from her is unclear. Although she checked in to the hotel with Paddock, she left the country as some point afterward. Now, authorities have arranged for her to return to the U.S. from Tokyo for questioning.

Lombardo and his colleagues have been quick to remind the public that details may change because the investigation is ongoing. “I think it’s important to understand that this investigation is going to be long and contracted before we get to the bottom of everything associated with it,” Lombardo said. Responding to direct questions about motive, Lombardo added: “I can’t get into the mind of a psychopath at this point.”