MIL vs MOA: Understanding the difference in scope measurements 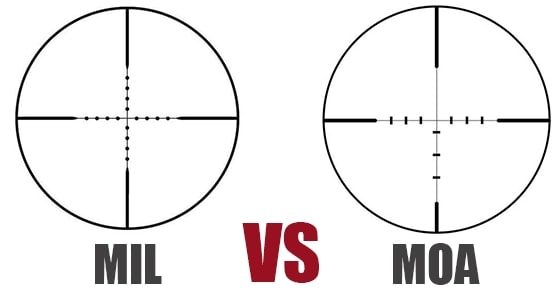 Within each sector of the gun industry silent wars are waged. Tactical shooters debate Keymod vs M-LOK, while pistol hounds growl over .45 and 9mm. For long range shooters, hunters or scoped shooters, the conversation lingers around MIL vs MOA.

While both represent measurements of an angle within a circle, helping shooters make adjustments at distance, they come with their own set of quirks and mental math. So what is MIL and MOA and, ultimately, which system is better?

MIL is short for milliradians and represents 1/1,000th of a radian. What exactly is a radian? Simply put, it’s a measure of distance traveled around a circle. To better conceptualize this, think of a round cake. If a person sat down to eat a cake and devoured exactly half, he/she would have eaten 3.14159 radians of cake or 3-4 slices depending on how big those slices are. In reality, the size of circle is irrelevant because radians measure the amount of travel around any size circle. A radian is a measure of an angle. A milliradian, therefore, is a small angle.

How does this translate to target shooting? While there’s some complicated math involved, none of which is within the scope of this article, the basics come down to one MIL representing 3.6-inches at 100 yards. Since angles operate proportionally, that number increases with yardage. Therefore at 200 yards one MIL equals 7.2-inches, 300 yards is 10.8-inches and so on. At 1,000 yards the angle of one MIL translates to a whopping 36-inches.

MOA, or minute of angle, takes that cake mentioned above and slices it so that each piece is one degree. Therefore the whole cake is 360-degrees. One slice, or degree, divided into 60 equal parts becomes minutes and one full circle has a total of 21,600 minutes of angular measurement. MOA is even finer than MIL, working out to 1.04-inches at 100 yards, but for simplicity’s sake, most shooters simply round that figure down to 1-inch at 100 yards. Again, angles work proportionally, so at 200 yards that number jumps to 2-inches and 3-inches at 300 yards.

MIL and MOA allows spotters to easily and more effectively communicate adjustments to the shooter, allowing him or her to dial in shots on target. Putting MIL and MOA to work on a practical level requires the understanding that bullets do not offer a flat trajectory, instead descending towards earth due to gravity.

When aiming at a target 100 yards away, the barrel must be tilted up slightly to accommodate for that bullet drop. At 1,000 yards that aim must be significantly higher. While some shooters choose to perform adjustments and calculations by hand through formulas, modern technology has granted gun enthusiasts with the ability to use apps via smartphones to handle calculations for adjustments, even factoring in bullet weight.

Despite MIL and MOA accomplishing the same task personal preference and purpose usually dictate which style a shooter leans to. “In general, hunters and newer target shooters skew towards MOA,” Jake Edson, of Bushnell, told Guns.com in an email. “While, in general, competitive shooters and elite shooters who have come out of the operations world skew toward MIL.”

A 2013 sampling by Rich Emmons of Precision Rifle Series shooters appears to agree. In his study, Emmons discovered that 46 PRS surveyed shooters relied on MIL-based reticles with only three shooters utilizing MOA.

Though the math is strenuous and each system has its own loyal fanbase, MIL and MOA fundamentally boil down to a single concept. As Edson put it, “In reality, both are simply units of measurement — like speaking in metric or Imperial units.” At the end of the day, MIL and MOA are simply a measurement means to a thunderous end.