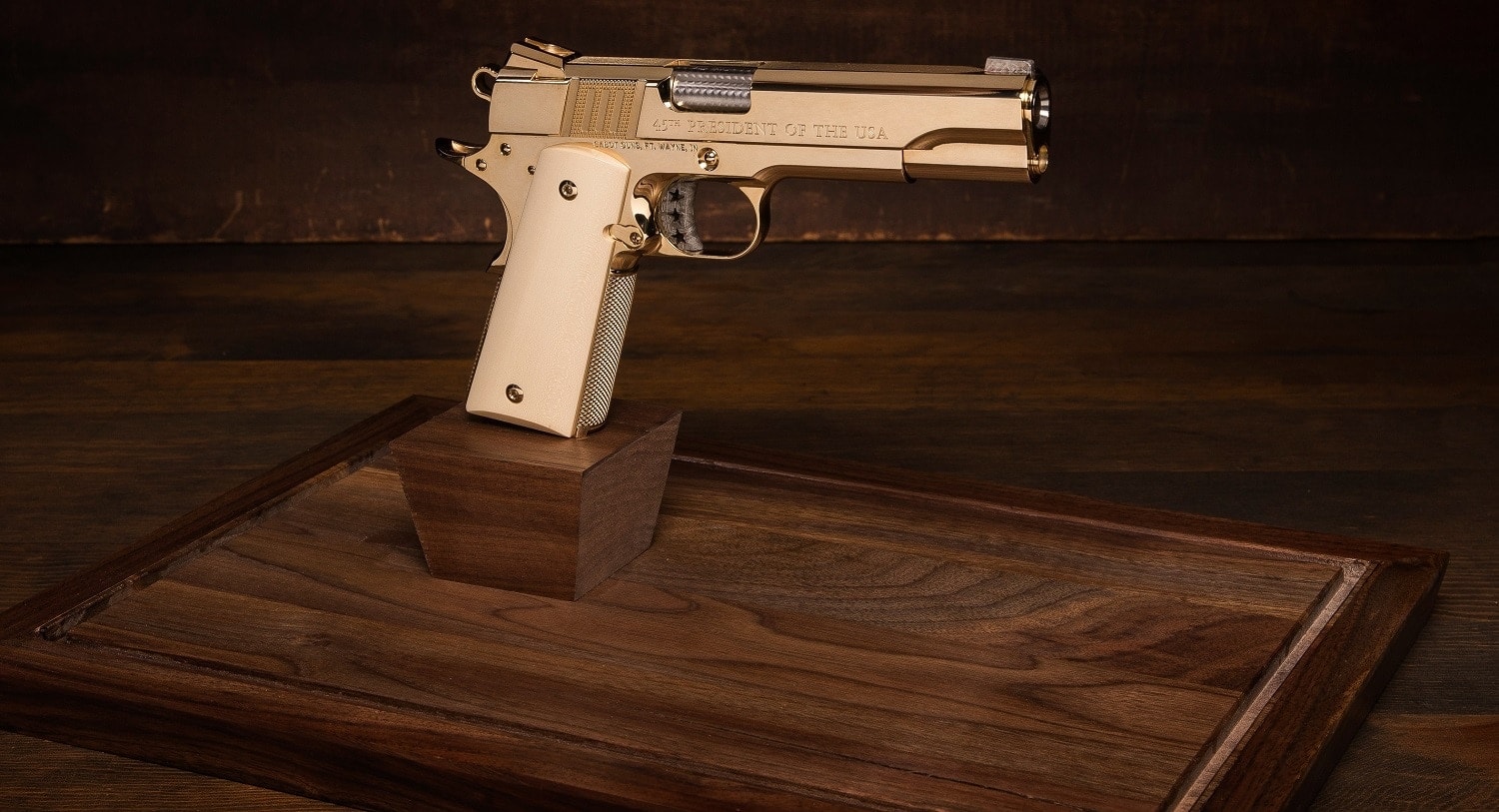 Prices for the guns that will be made available to the public are expected to range from $15,000 to $50,000 depending on the appeal of the serial number to individual buyers and organizations. (Photo: Cabot)

Displayed on a base made from wood in-lays from the USS Constitution, each pistol in the custom 45-gun limited run will be serialized with a President’s name from Washington to Trump.

Cabot Guns has been teasing the limited public offering since October and pulled the trigger with the full details on Wednesday. Each Trump 45 series pistol will be made from a block of aerospace-grade steel and finished with a high-polish 24-karat gold coating. The display stand included with each gun that contains artifact wood saved from the frigate USS Constitution, the oldest commissioned warship on the Navy List. 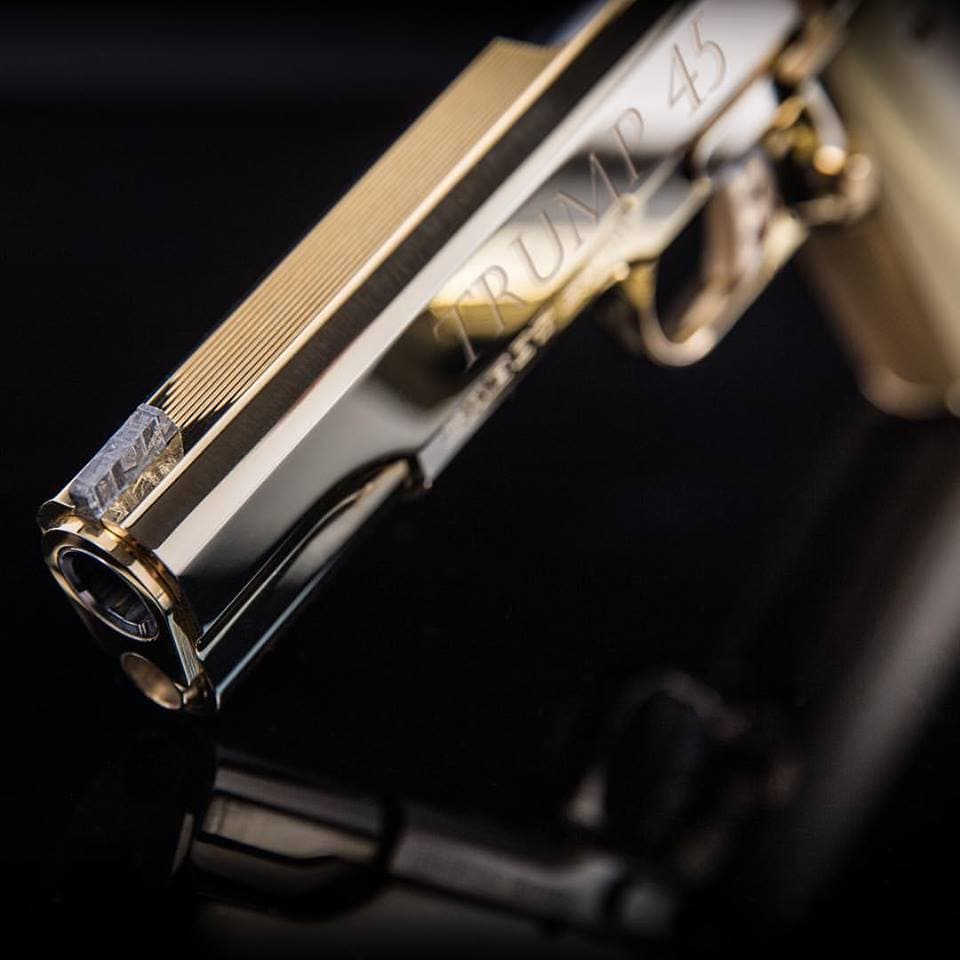 “Symbolizing the meteoric focus of the Trump Presidency and commitment to America,” the trigger and front sight are crafted from a 4-billion-year-old meteorite.

Limited to just 45 guns in the series, each is serialized sequentially in honor of a U.S. President, starting from George Washington (#WASHINGTON01) through Donald Trump (#TRUMP45) and will be made available through a mixture of direct public sales and auctions with sale prices expected to range from $15,000 to $50,000 depending on the appeal of the serial number to individual buyers and organisations.

“Making a great American product is how we express our appreciation for President Trump’s commitment to making America great again,” said Rob Bianchin, founder and CEO of Cabot Guns. “The election of President Trump was critical to those of us who value upholding the constitution, especially the Second Amendment.” 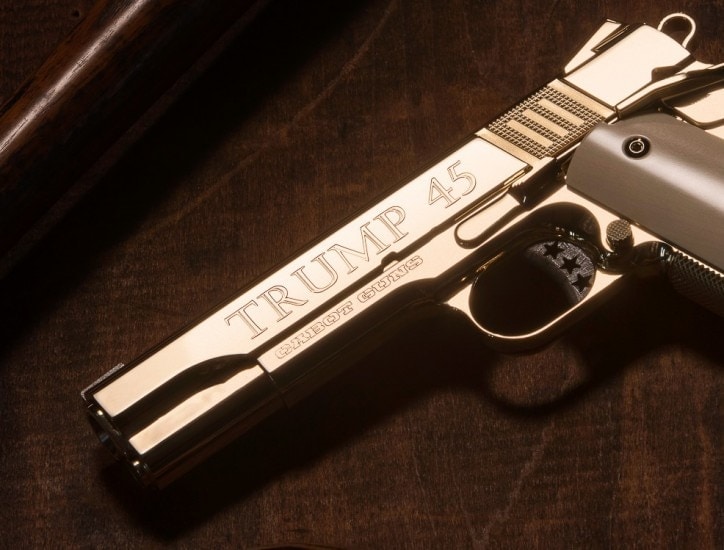 Cabot has been experimenting with a Trump commemorative since last December when they unveiled a one-of-a-kind a golden GI 1911 with “TRUMP 45” in all caps along the gleaming slide just months after they debuted a matching pair of $4.5 million pistols delicately crafted from a chunk of the famed Gibeon meteorite.

“Cabot Guns has quickly become the Rolls Royce of 1911s,” says, S.P. Fjestad, author of the popular Blue Book series of gun values “Already very collectible, they also shoot as well as they look. No expense has been spared to make these Model 1911 variations the world’s finest pistols—truly modern-day heirlooms.”