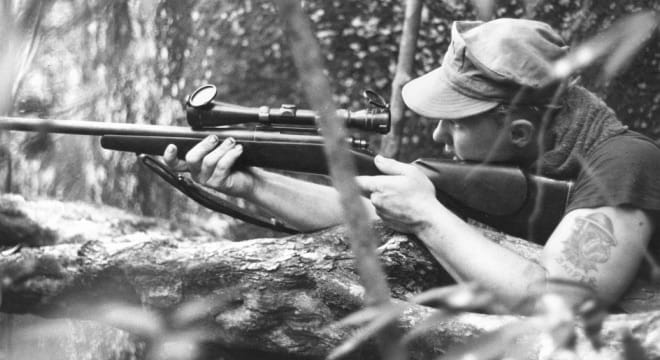 From the days of World War I through today, dedicated U.S. Marine Corps snipers have used a variety of specially modified rifles to reach out and show off their marksmanship.

When the U.S. entered the Great War, the standard rifle of in use by the Marines was the M1903 Springfield, some of which were modified with Winchester A5 scopes. 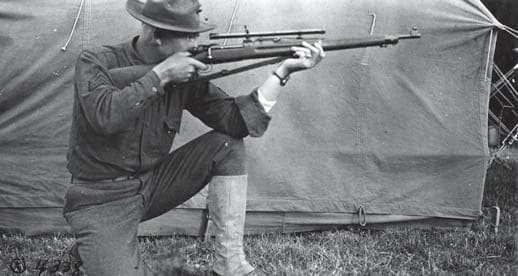 U.S. Marine firing the “USMC Telescopic Rifle, Model of 1917” which is an M1903 with a Winchester A5 scope. (Photo: National Archives)

By the time World War II arrived, the standard Marine sniper’s gear included the updated M1903A-1 model Sprinfield with a Unertl 8x scope– immediately distinguishable by its long shade on the objective lens– which they designated the M1941 Sniper Rifle. 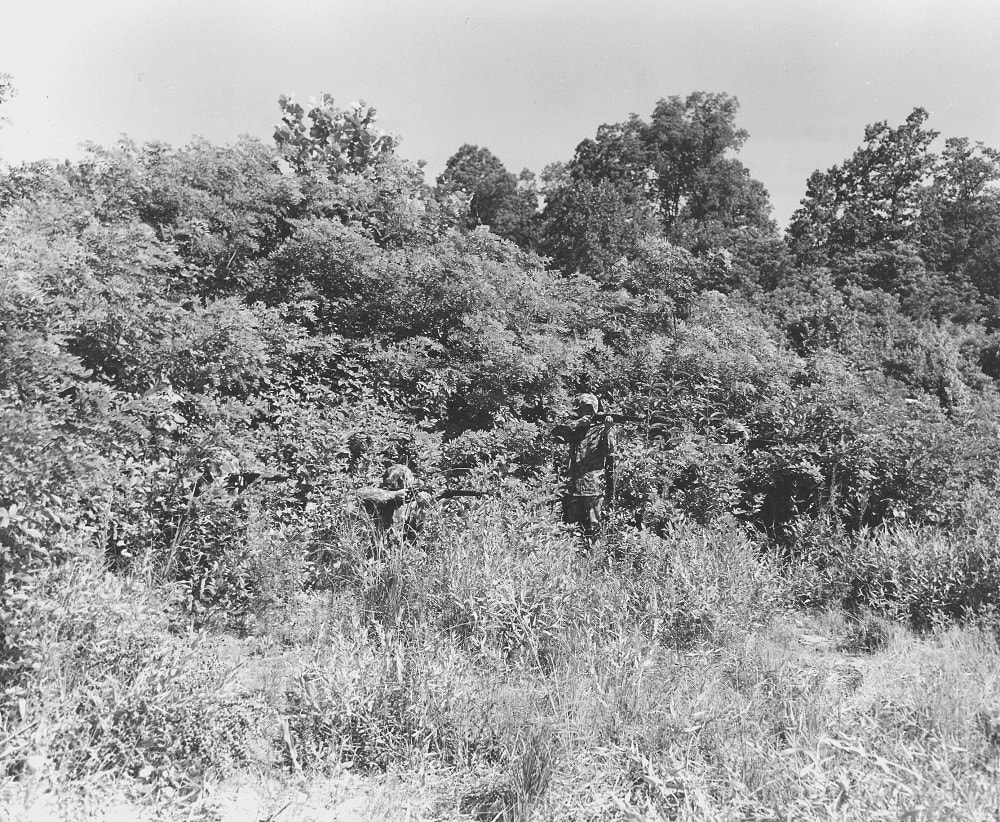 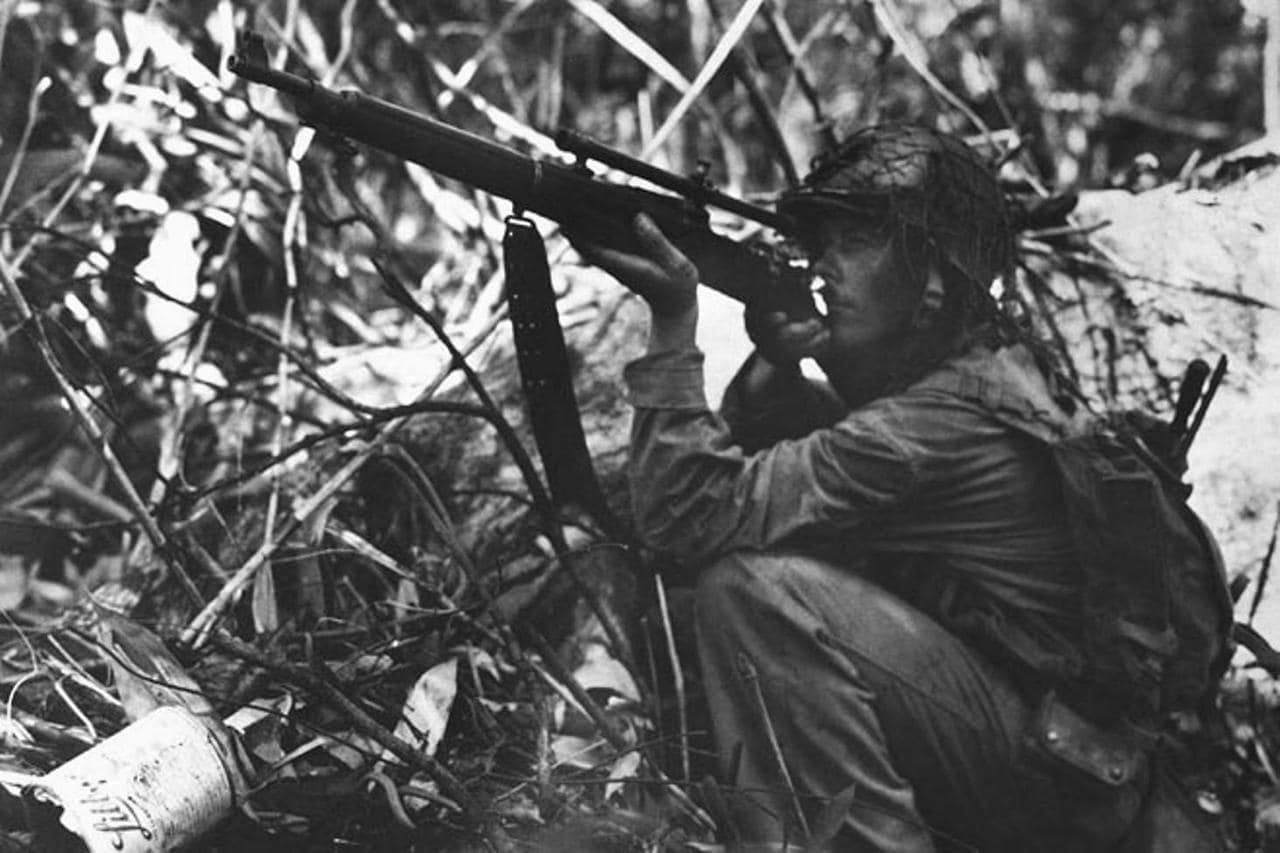 By the time the Marines became involved in Korea in 1950, the standard sniper rifle was the M1C Garand, a sniper variant rifle rebuilt by Springfield Armory and fitted with a Stith Kollmorgen MC-1 telescopic sight and special Griffin & Howe mount and rings, though some 1903s endured. 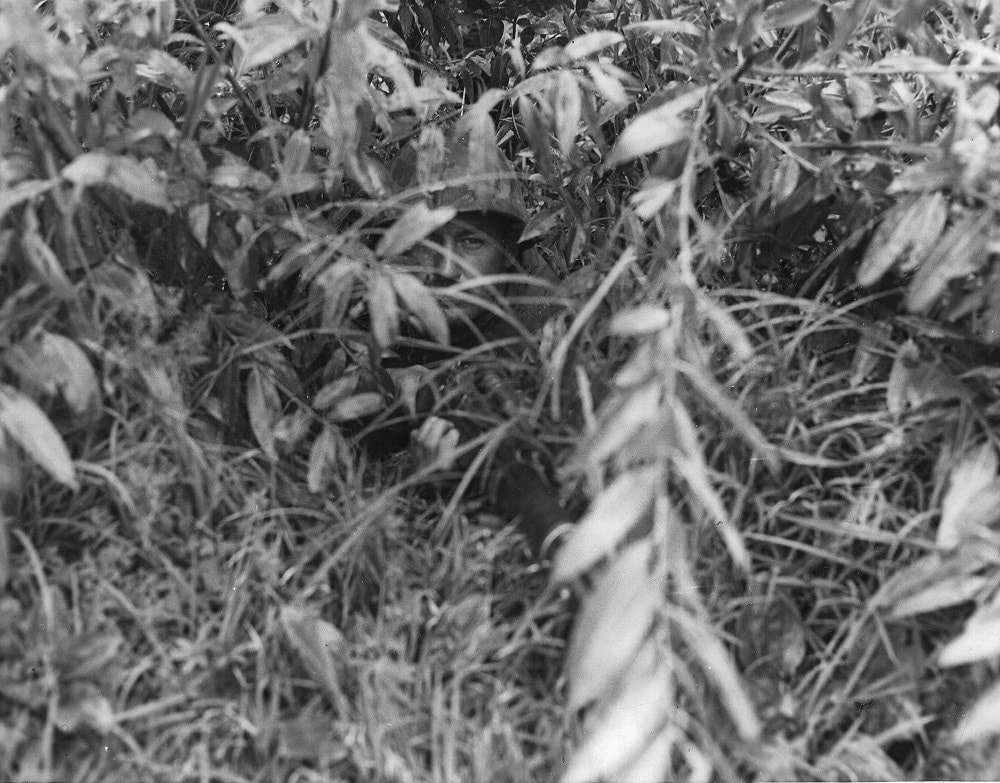 “Marine Technical Sergeant John E. Boitnott. Who won fame as a sniper who shot nine of the enemy with nine shots in Korea, takes a prone position behind the cover of tall grass.” Note the M1C. (Photo/caption: U.S. Marine Corps History Division) 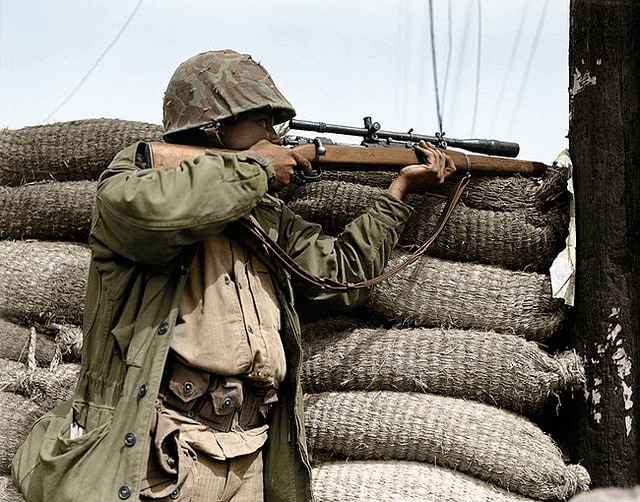 “A U.S. Marine Marksman using a telescopic sight and with his Springfield cocked and ready, waits for a troublesome North Korean sniper to pop up so he can pick him off in Seoul, the capital city of South Korea on Sept. 28, 1950. Note the Unertl. (Photo/caption: Max Desfor/AP)

Vietnam saw a scramble for adequate sniper rifles with a small amount of pre-64 Winchester Model 70s– often with WWII-era Unertl glass–pressed into service from the Marine rifle team and other sources as well as some Remington 700s. The latter, chambered in 7.62 NATO and customized with a 3x-9x Redfield Widefield Accu-Trac optic but sill with their walnut stocks, were used as the original M40 sniper rifle. These were augmented by accurized M-14s and Starlite-equipped M16s. The conflict produced legendary Marine Corps snipers Carlos Hathcock, Chuck Mawhinney and Eric England. 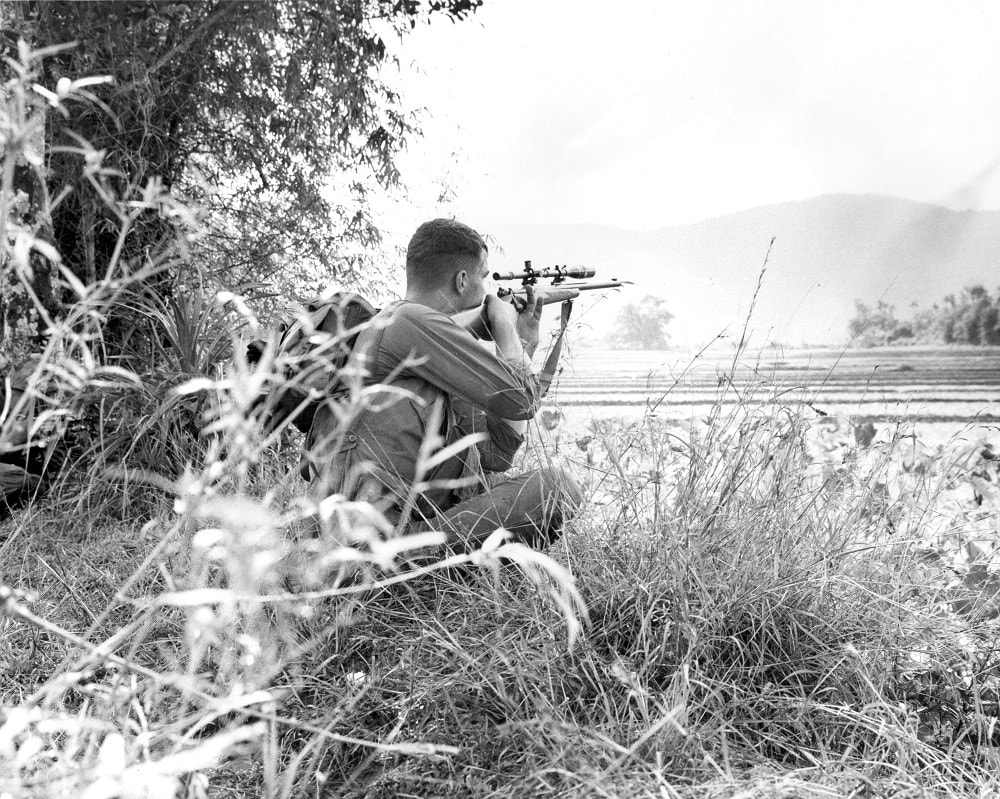 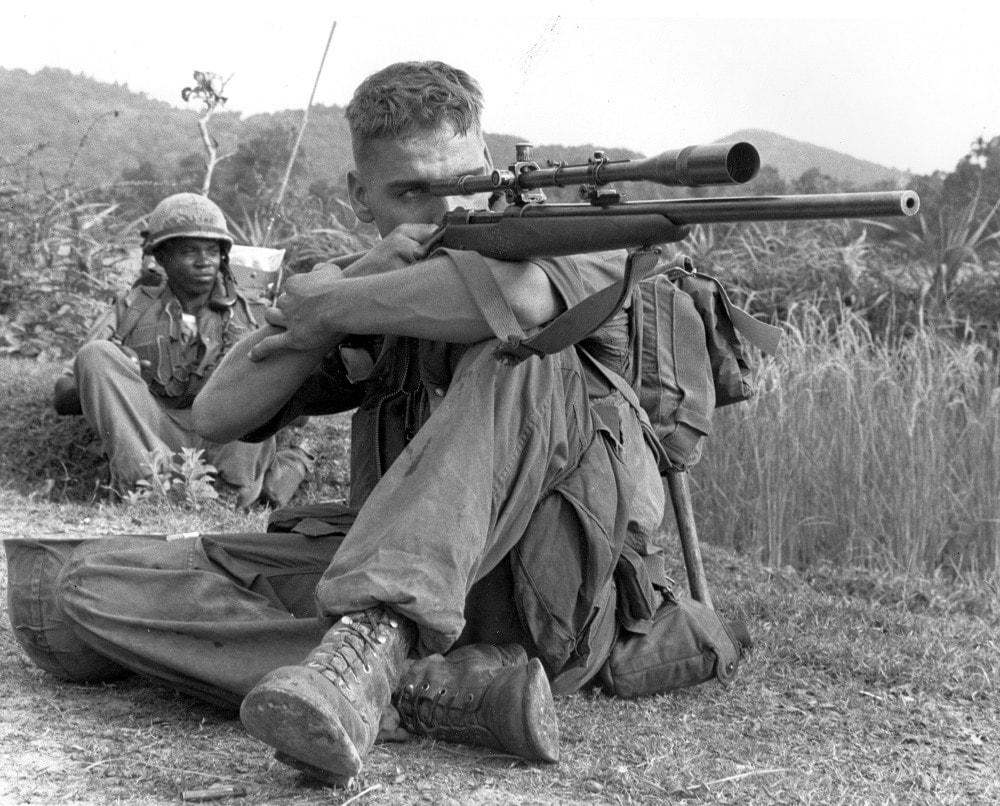 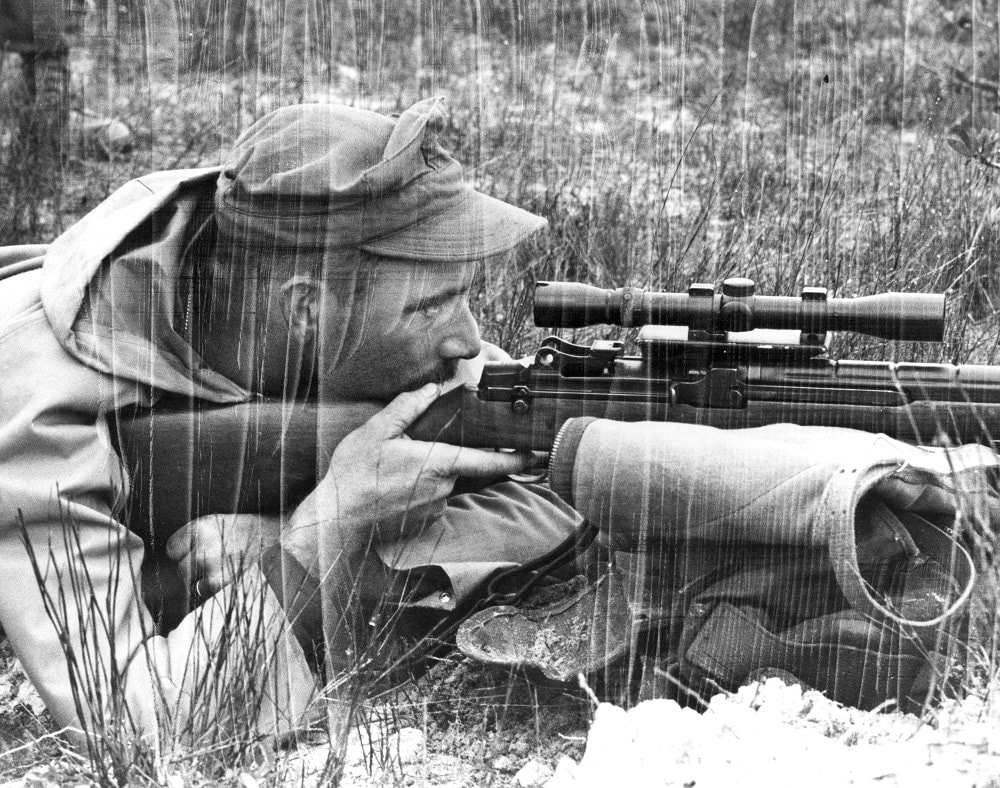 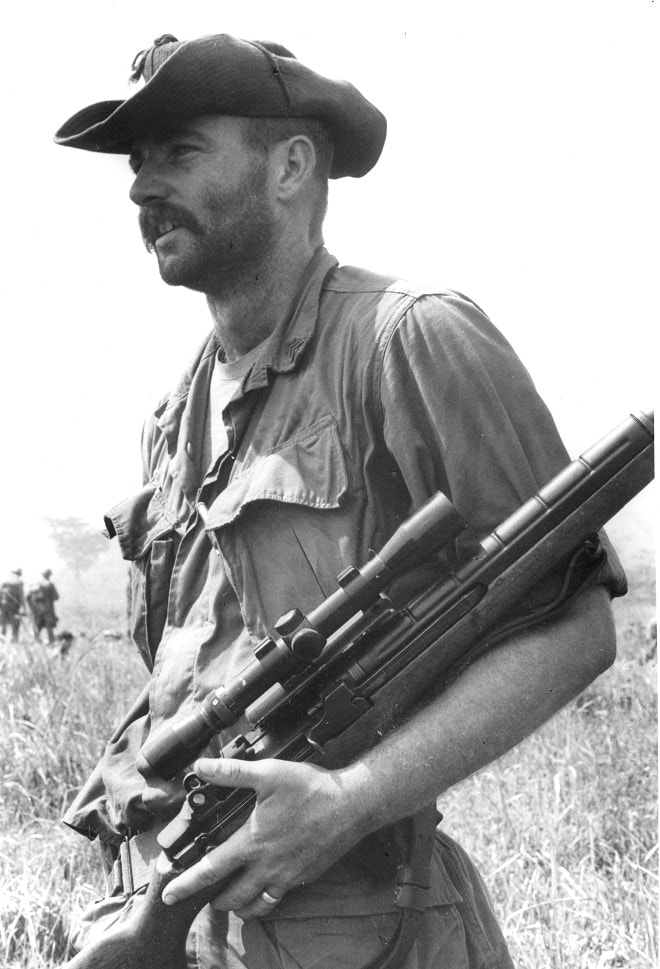 “Sgt. Howard J. Greene, NCOIC 1/9 Sniper Team, taking a break in the Sun during a lull in the fighting on Op. Prairie II near the DMZ. 3 March 1967” (Photo/caption: U.S. Marine Corps History Division) 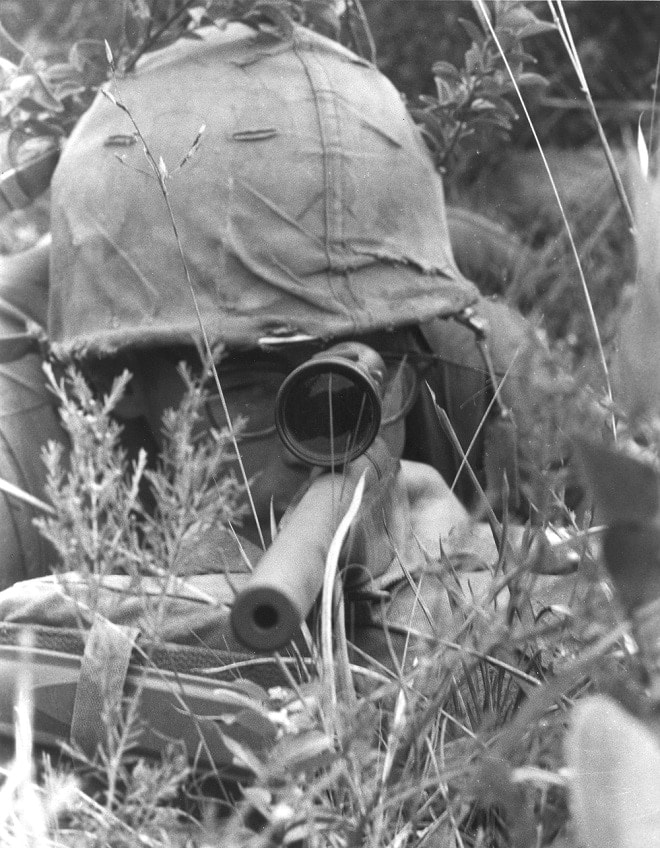 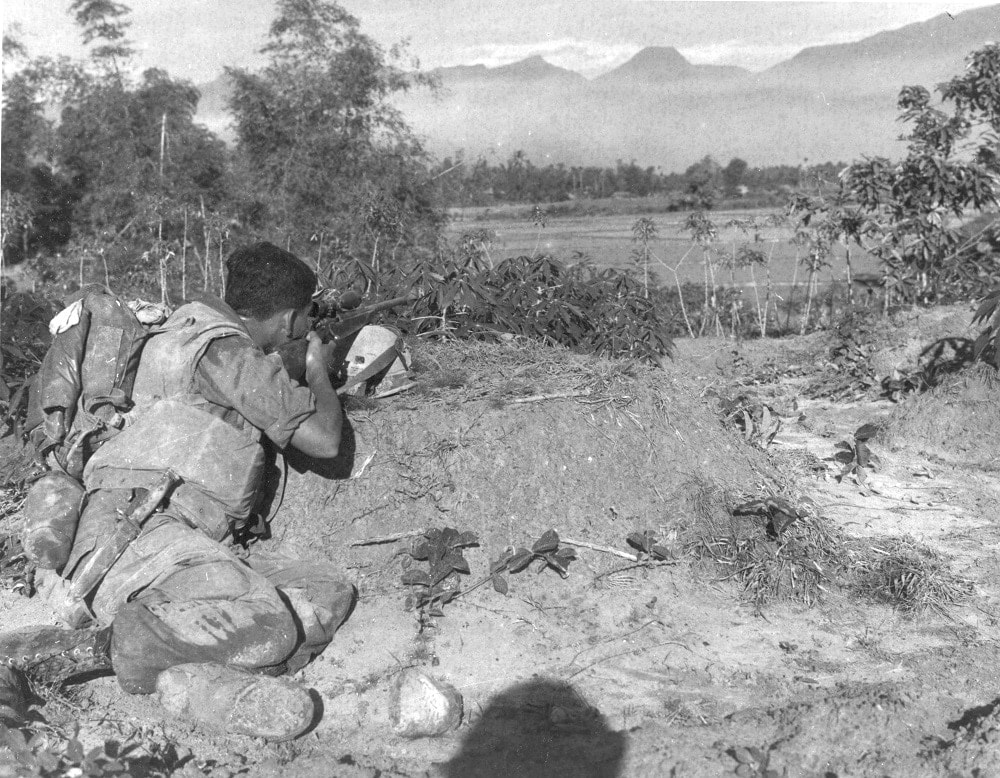 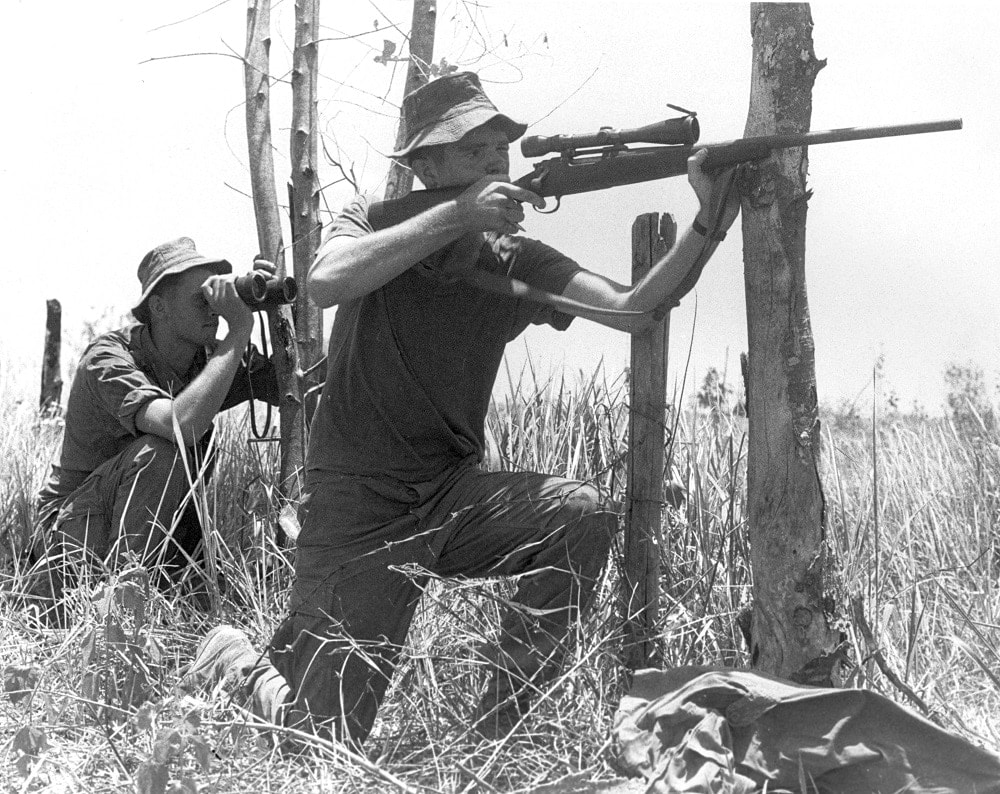 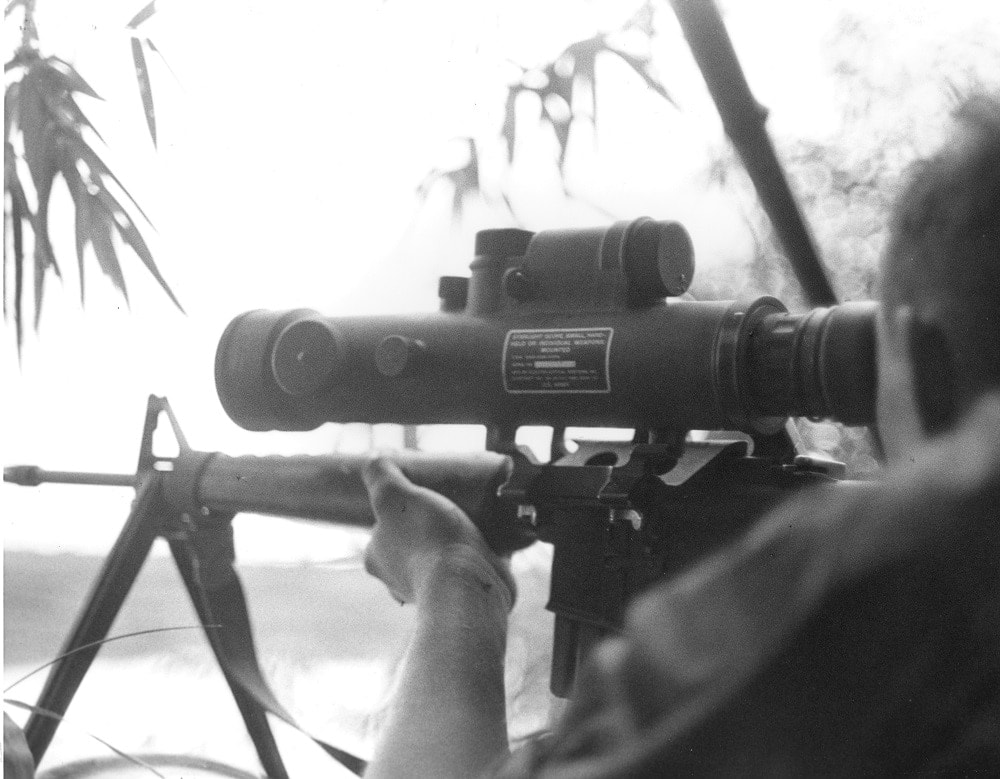 A Marine sniper with an early M16 equipped with a Starlite scope is silhouetted while taking aim at an enemy target at dusk during Operation Shelby, 15 miles south of Da Nang. September 1, 1967 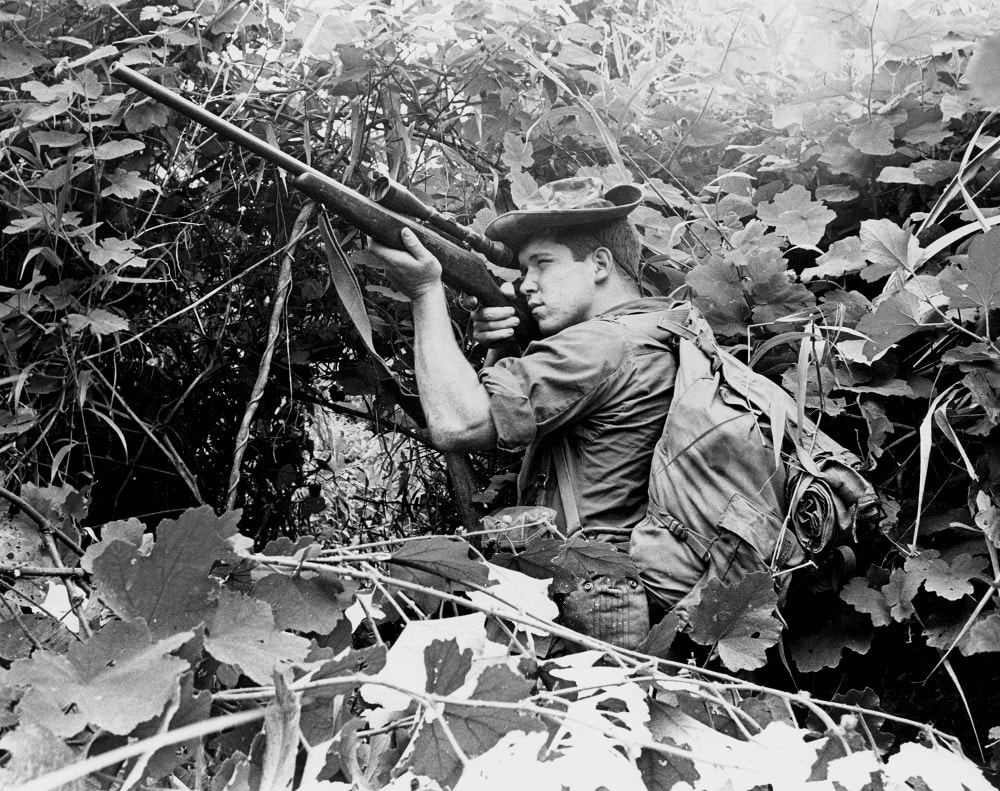 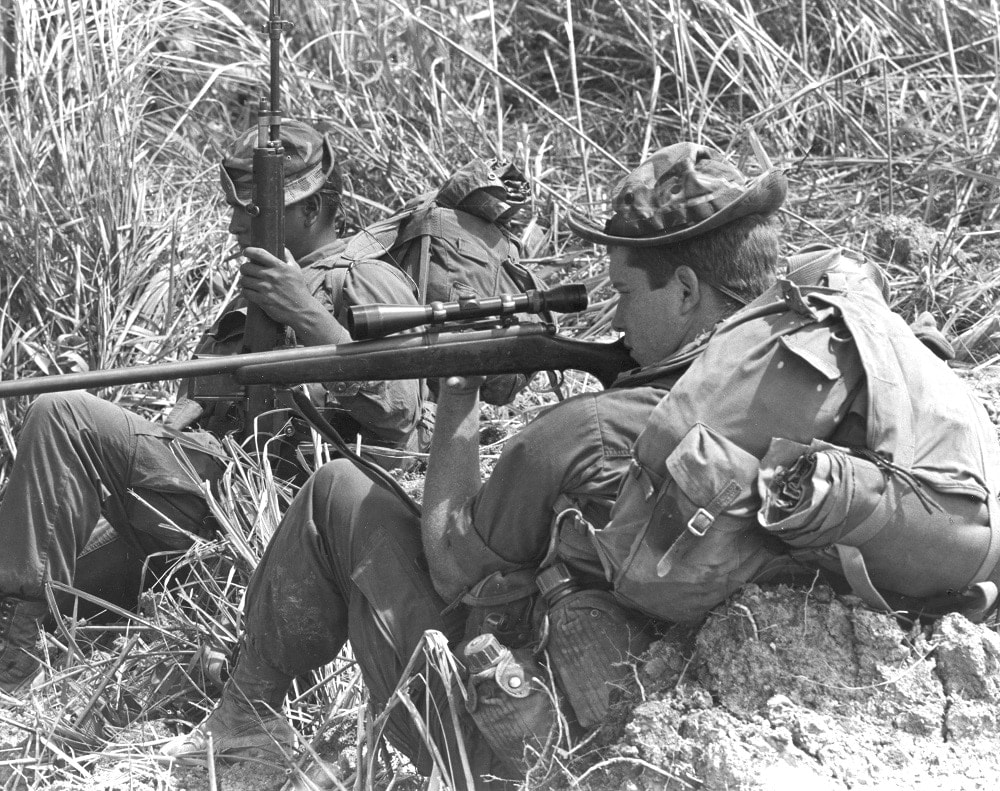 Since Vietnam, the Marines have used successive versions of the M40, with the M40A6 being the current model augmented by the .50-caliber Barrett M82A3 and M107 for use in anti-material roles and smaller numbers of Mk 11 Mod 2 and M110 semi-auto rifles. 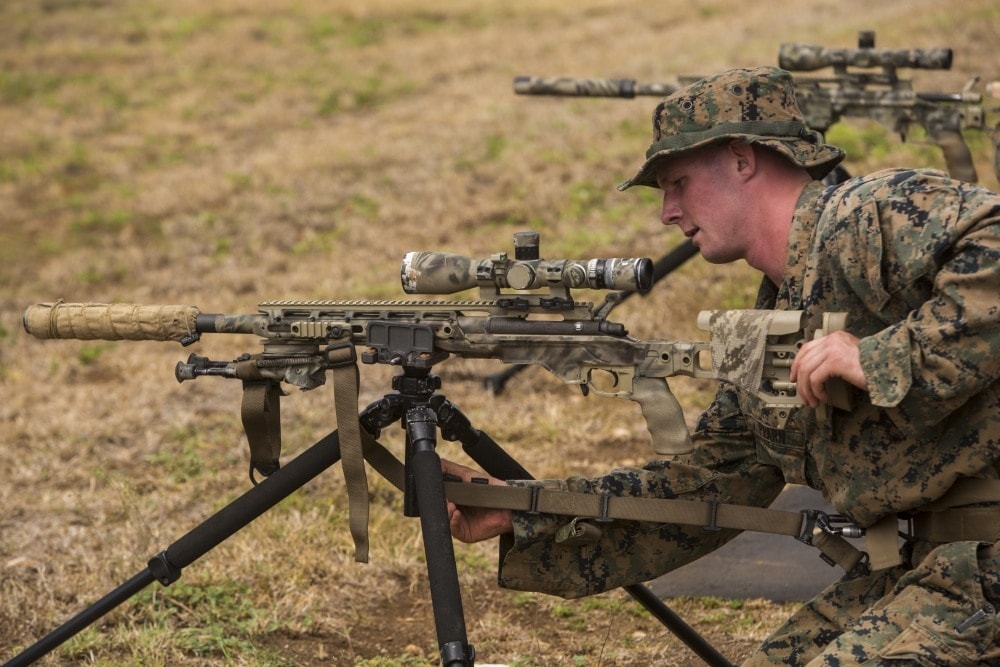 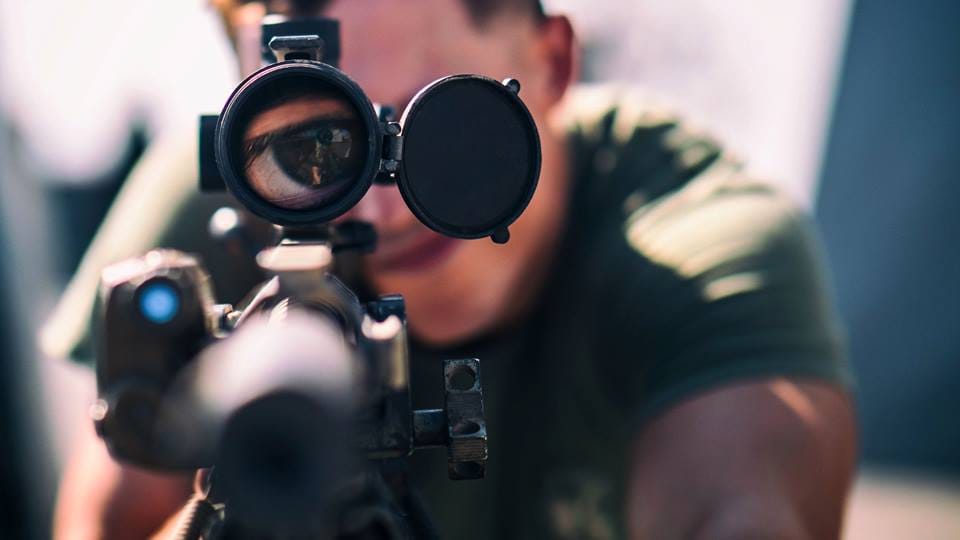 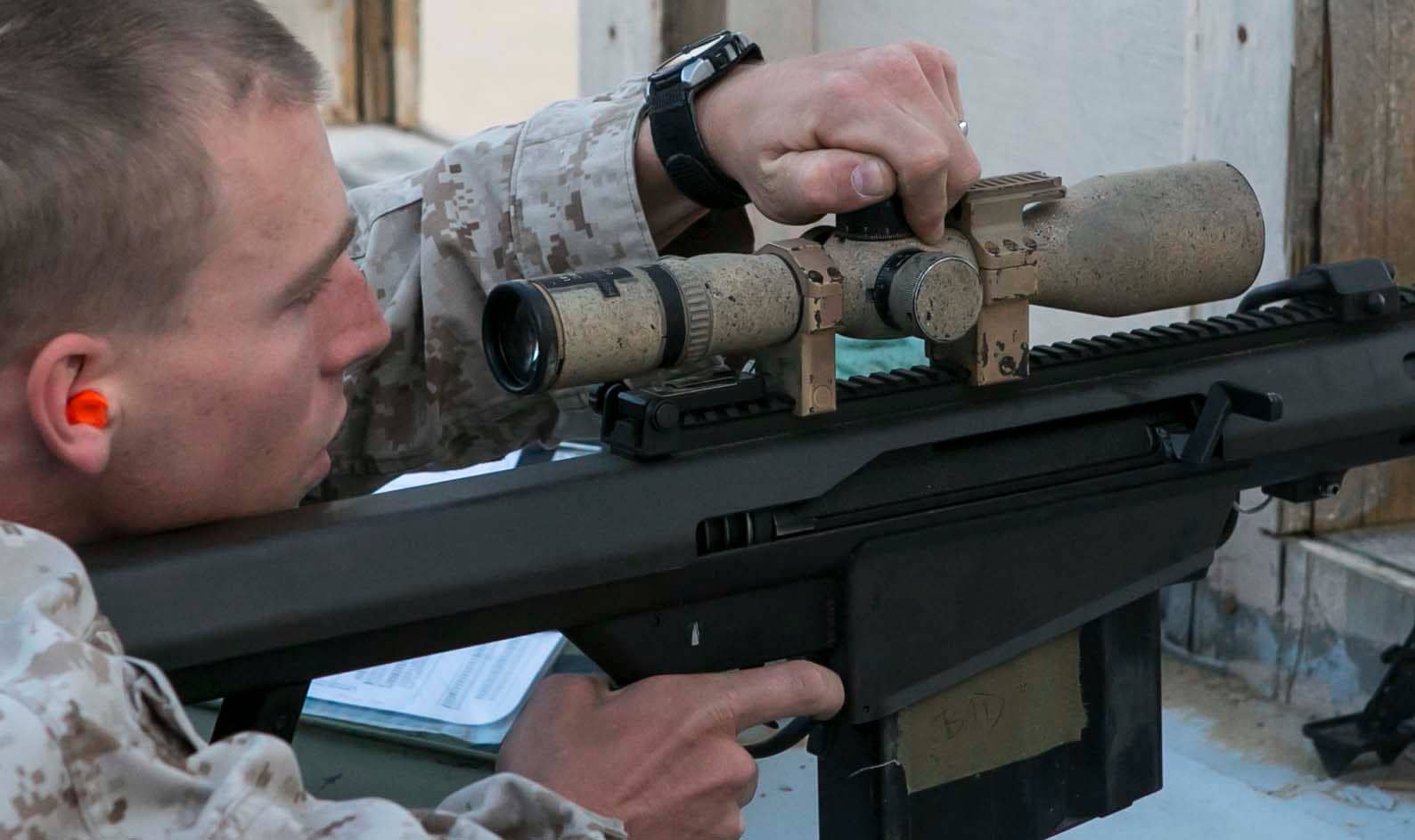 To get a feel for how current U.S. Marine Scout Snipers do things, check out the very moto short video below, showing these more modern platforms at work.