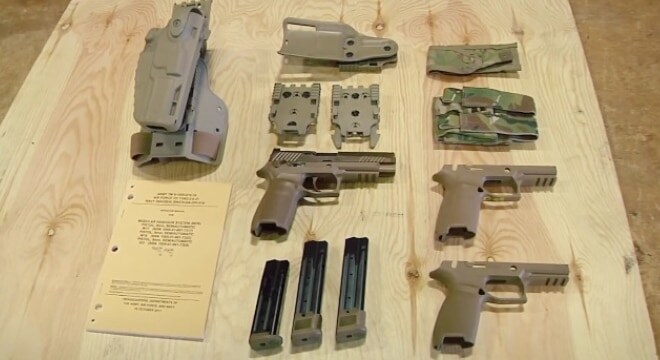 The MH17/18 system as fielded by the Army. The platform is produced by Sig Sauer, the winner this year of the Modular Handgun System contract (Photo: U.S. Army)

The company intends to make a small quantity of the Army’s Modular Handgun System contract winning design available to the public.

Each of the M17 pistols sold to the public will be — almost — identical to the one the Army is currently fielding, lacking the anti-tamper mechanism for the striker action and some special coatings on internal parts, Military.com reported. They will, however, come with a letter of authenticity and a serialized matching challenge coin.

“We are planning to do a limited release of about 5,000 of the Army variant of the M17 for the commercial market,” Tom Taylor, Sig Sauer’s chief marketing officer, told Military.com. “The timing is not finalized yet, but it looks to be late spring.”

Taylor said a price has not been set but that they wanted to make the small batch commercial run “really special.”

Though based on the P320 series of modular handguns, both Sig and the military have stressed that the full-sized M17 and its little brother, the compact M18, are not the same animal as their civilian predecessor. Army Chief of Staff Gen. Mark Milley went on record earlier this year, saying, “[T]he guts and the internals of the military version of that weapon are different than what you’re going to buy in the gun store or what police are going to be fielded.”

The first batches of the M17/18 were issued to troops of the Fort Campbell-based 101st Airborne Division late last month as part of a 190,000-pistol initial buy. The handgun platform will then be fielded to a new installation each month until September 2018, except for next March and April. In all, the contract is expected to be worth as much as $580 million to Sig, a figure that could grow as additional branches flesh out plans to adopt the handgun to replace legacy stocks of M9 pistols, a military version of Beretta’s Model 92 adopted in the 1980s.

The M17 is not Sig’s first tie-in with a military issue sidearm, as they have since 2011 marketed the MK25, a variant of the P226 9mm adopted by the Navy SEALS, complete with government-style UID label on the frame and a Navy anchor engraving on the slide. Similarly, following the adoption of a modified Colt 1911 as the M45A1 Close Quarters Battle Pistol by the Marines in 2012, that Connecticut-based firearms company began marketing a commercial variant to the public.