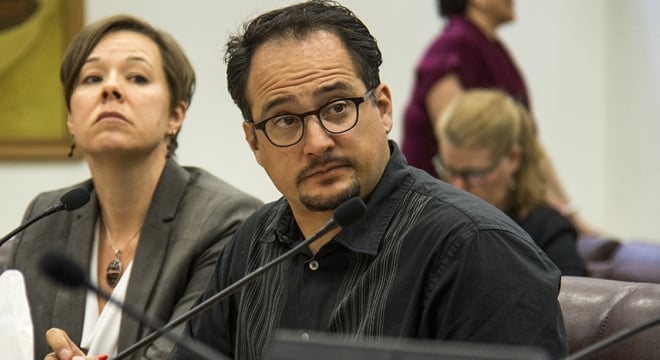 Denver City Councilman Rafael Espinoza is backing a restriction on bump stocks in the city that could see violators spend as much as 180 days in jail. (Photo: Kevin J. Beaty/Denverite)

A Denver City Council committee on Wednesday unanimously approved a new ordinance to define a “bump stock” and outlaw their possession and use in the Colorado city.

According to the measure’s sponsor, Councilman Rafael Espinoza, the amendment to the city’s assault weapon ban comes in response to the use of bump stocks in the Las Vegas Route 91 Harvest festival shooting in October and their subsequent regulation in Massachusetts in November and Columbia, South Carolina last month.

“Why would we allow a rank amateur to have that sort of firepower and capacity, unnecessarily, if we’ve already banned machine guns of this type?” said Espinoza.

Under the guidelines of his proposal, “any device for a pistol, rifle or shotgun that increases the rate of fire achievable with such weapon by using energy from the recoil of the weapon to generate a reciprocating action that facilitates repeated activation of the trigger,” would be affected. Those found in violation would face as much as a $999 fine and 180 days in jail.

Denver’s city laws going back to 1989 already restrict access to semi-auto firearms and magazines capable of holding more than 21 rounds. Espinoza introduced his proposal in late November and with a win in the City Council’s Safety, Housing, Education & Homelessness Committe this week, it heads to a full vote later this month.

Similar legislation to ban the devices is underway on Capitol Hill and more than a half-dozen states.