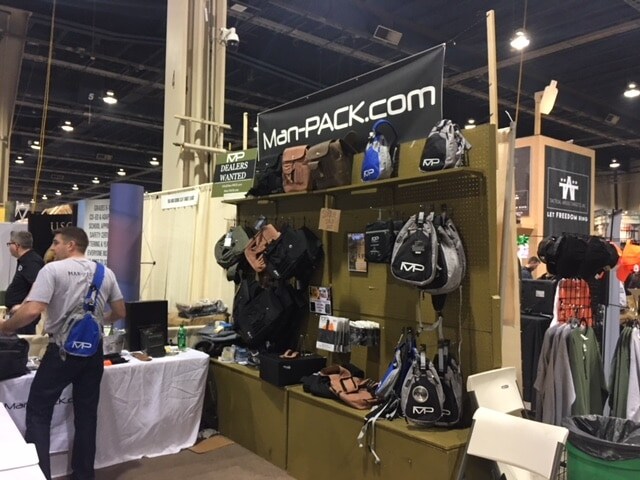 “Manpack is a real word in Websters dictionary and it means able to be carried by a single individual,” he told Guns.com earlier this month while showing off his latest designs at the 2018 Great American Outdoor Show. “But everybody assumes it’s a man purse, so I’ve got to school people on that.” 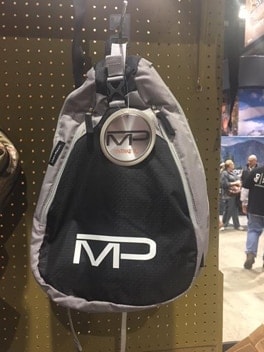 The Spitfire, a unisex design created by Man-PACK after women expressed an interest in using the concealed carry bags, too. (Photo: Christen Smith/Guns.com)

Tweedie, a general contractor by trade, founded Man-PACK in 2012 after searching for a durable, utilitarian bag he could carry to construction sites without risking the contents inside — or catching flack from his coworkers.

The original sling-style bag is rooted in a “light-infantry mentality” and has been the focus of two successful Kickstarter campaigns and an episode of ABC’s Shark Tank.

In the six years since, Tweedie has refined his designs and opened up the market to include unisex styles after women approached him in need of something other than a faux leather purse.

“I looked at the concealed carry bag market as far as women were concerned and I found a bunch of faux leather purses, which I don’t want to manufacture,” he said. “Then I thought there’s a whole demographic of females  …they wear yoga pants and they hike and they are gym-goers and their needs are not being met.”

And so, Tweedie said, the Spitfire was born. The ambidextrous design is lightweight, durable and water resistant, he said.

“It’s been great,” he said. “We’ve sold out of purple. So they’re pretty popular.”