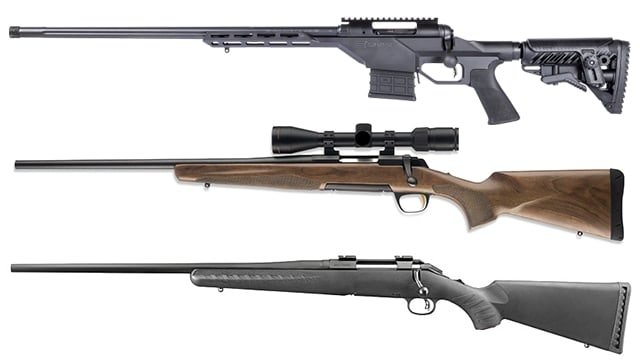 Comprising approximately 10-percent of the population, southpaws generally have to learn to live in a right-handed world. In the past, for gun owners, this meant adapting to guns configured for right-handed use. However, times are changing and as customization takes a larger role in gun owners’ arsenal, so do guns designed to adapt to lefties.

More and more pistol companies offer ambidextrous controls to grant left-handed shooters the ability to operate magazine releases, safeties and slide locks/releases more efficiently. The AR-15 platform, with its modular style that already gives shooters the customization capabilities, allows shooters to literally build what they need from the ground up.

Bolt guns, however, have long given lefties a slight headache forcing them to change shooting position or awkwardly reach around the rifle in order to cycle the bolt. Realizing a need for left-specific firearms, more companies are beginning to answer the call and provide more bolt rifle options to southpaws.

“Becoming the left-handed leader is not an accident. Part of the genius behind our long-standing, time-proven action designs is versatility. Quite simply, our actions are easier to convert to left-handed,” Reich said in a statement. “Many of our competitors need a completely different receiver design to convert their right-handed rifles to the left. This is time-consuming and expensive, so they often decide to opt out of the left-handed market. Not us.”

Cost has long been a sticking point for southpaw shooters, forcing many to simply learn to put up with right handed configurations to keep costs low. However, as manufacturing costs have dropped and firearms makers have learned to better customize guns the price on left handed guns has steadily started to drop. Many left-handed options are now the same price or cost only slightly more than the “standard.”

“It is not uncommon for people to tell us at sports shows and through social media channels that they are right-handed yet shoot lefty,” Reich said. “When a right-handed person switches the gun to their left shoulder and uses their dominant eye to aim, they are often more accurate. It’s not uncommon for us to hear about shooters and hunters—those with years of shooting experience—deciding to sell their right-handed guns and buy a left-handed one, especially bolt-action firearms. These folks are shooting more accurately and getting more satisfaction at the range and on their hunts when using a left-handed gun.”

Savage has taken the lead in offering left-handed options, but other large manufacturers like Browning, Remington and Ruger are also taking up the cause. Browning serves up a few lefty models on its X-Bolt line while Remington’s Model 700 divvies up three left compatible options and Ruger sports left handed variants on the Ruger American Rifle series.

While the right-handed faction of firearms will continue to dominate the consumer market, all-in-all the firearms market is ever so slightly left-leaning, so to speak, with more and more affordable options coming on deck for those with southpaw tendencies.