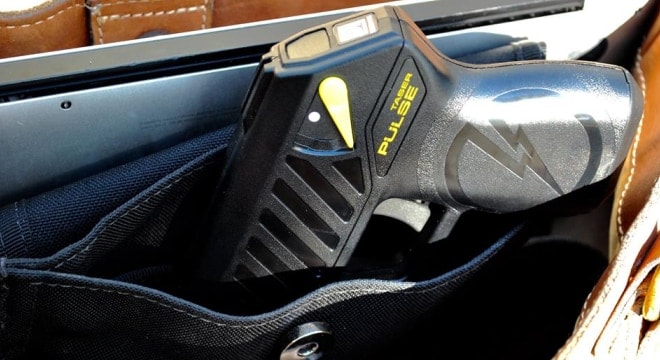 The plaintiff in a legal challenge filed against Hawaii’s prohibition on “electronic arms” wants to buy and carry a Taser Pulse but can’t under state law. (Photo: Taser)

A British man living in Honolulu has filed suit over Hawaii’s regulations effectively banning electronic arms of all kinds for those not in law enforcement.

Andrew Namiki Roberts this week filed suit against Honolulu Police Chief Susan Ballard and state Attorney General Russell Suzuki seeking to overturn the state’s strict laws concerning stun guns and tasers. The devices are illegal to possess or sell under most circumstances, with exceptions for police and the military, and Namiki Roberts cannot get a local concealed carry permit due to his citizenship. As such, he contends he is defenseless under Hawaii’s laws.

In the 14-page filing, attorneys Alan Beck and Stephen Stamboulieh outline that the would-be Taser owner is a self-employed photographer in the picturesque Pacific island chain and often carries expensive equipment. Although Nakimi Roberts has a clean criminal record and no history of mental problems that would prevent him from owning a firearm, he was told by Honolulu police that it would be illegal for him to possess a Taser either in his home to protect himself or nine-year-old daughter, or while out in public.

The filing pointed out the apparent flaws in the state’s law when compared to the 2008 Heller decision as well as Caetano, a 2016 Supreme Court case directly concerning stun guns which held the electric devices were bearable arms protected by the Second Amendment.

Beck told Guns.com that, post-Caetano, “It is clear that electric arms are protected by the Second Amendment and the State of Hawaii’s complete ban on electric arms is unconstitutional. It is my hope that the State of Hawaii will acknowledge that fact so that this case can have a quick resolution. However, if they do not, Mr. Stamboulieh and I are prepared to litigate this matter as long as needed to vindicate our client’s constitutional rights.”

Namiki Roberts is seeking for the courts to declare Hawaii’s law unconstitutional.