Background check info could be held longer under House plan 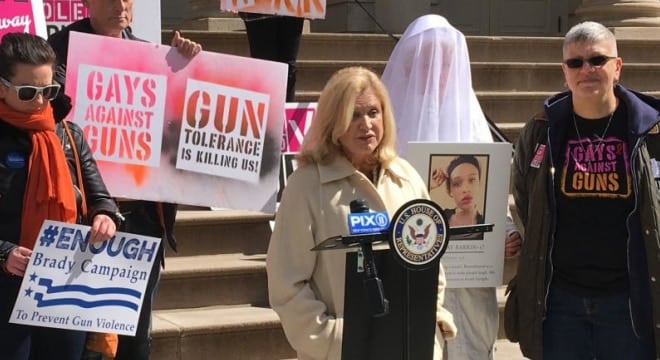 Currently, National Instant Criminal Background Check System approvals are purged of personal information after 24 hours, but a plan backed by a New York Democrat would push this to 90 days.

The practice of destroying the records of approved checks is mandated by federal law and was reached after a series of legal challenges to the Brady Act aimed at preventing the building blocks for a national gun registry. However, one member of Congress, backed by a throng of gun control organizations, says that by deleting the information the background check system is weakened.

“This bill would give law enforcement the tools it needs to ensure NICS is accurate and effective by giving them enough time to properly audit the background check system,” said U.S. Rep. Carolyn Maloney, who plans to introduce her NICS Review Act in coming days. “We must do all we can to ensure that those we have already deemed ineligible aren’t slipping through the cracks.”

Maloney’s office outlines that her proposal would bump the current 24 hour maximum for keeping approved records intact to a 90-day minimum so that the FBI and federal firearms regulators could better audit the background check system. Under current guidelines, NICS scrubs identifying information about purchasers from approved checks within 24 hours to comply with federal law, retaining just the transaction number and date of the check for reviews. For delayed background checks, which accounted for about two percent of all checks according to a 2016 audit of NICS by the Office of the Inspector General, purchaser information is kept up to 90 days while the transaction is pending. Checks that deny a transfer do not have their information purged from the system.

In 2002, a GAO report in response to a request from U.S. Sen. Dick Durbin, D-Illinois, concluded that the 24-hour rule would not adversely impact system audits but could affect public safety in such cases where, for instance, the FBI was informed of information that would bar a person from being able to possess a firearm after the NICS approval had been issued.

Those calling for stronger gun regulations think keeping the records of purchasers approved through NICS for a much longer period is a great idea.

“Extending the period of time that background check records are retained, gives law enforcement another tool to keep our communities safe,” said Shannon Van Esley with the Brady Campaign, who appeared with Maloney at New York City Hall along with members of like-minded groups to announce the bill on Thursday. Also in tow were representatives of Gays Against Guns and New Yorkers Against Gun Violence.