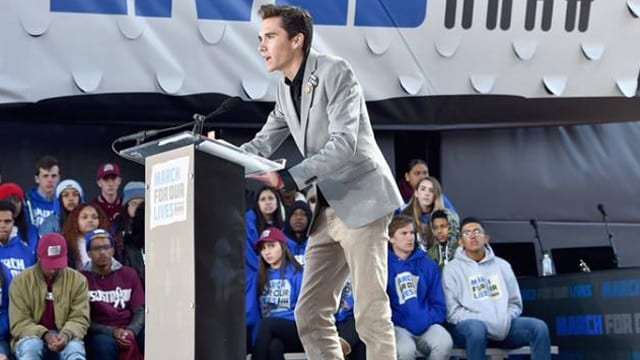 David Hogg, the outspoken gun control advocate who emerged from the Parkland, Florida school shooting, called for a boycott of financial institutes that invest in gun companies.

“(BlackRock) and (Vanguard Group) are two of the biggest investors in gun manufacturers; if you use them, feel free to let them know. Thanks,” Hogg wrote on Twitter on Tuesday. He followed up with hashtags for boycotting both companies and a screenshot of a list of major shareholders for a gun maker.

.@blackrock and @Vanguard_Group are two of the biggest investors in gun manufacturers; if you use them, feel free to let them know. Thanks ?

In the days after the Valentine’s Day shooting, Hogg and his fellow students led the charge to pressure corporate America to cut ties with the gun industry. Dozens of brands broke partnerships with the National Rifle Association over its stance on gun control, banks began reviewing and changing policies, and retailers began adopting new rules.

Investors have a tougher time unraveling money from index and mutual funds tied to the industry and may not be able to even if they want to. Vanguard has about 18 percent of its more than $4.5 trillion in active funds exposed to gun-related stocks, according to estimates by ThinkProgress. BlackRock has about six percent of its $1.7 trillion exposed to gun-related stock.

In response, Vanguard explained that most of its funds — 359 out of 388 — do not have exposure to gun manufacturers, a company spokesman told CNN. “Importantly, Vanguard is taking action, meeting with the leaders of gun manufacturers and distributors,” the company said in a statement. “We want to know how they will mitigate the risks that their products pose and how they plan to help prevent such tragedies from happening again.”

Also, both companies already offer socially conscious funds that exclude gun-related stocks. Most recently, after a thorough review of gun companies and their policies, BlackRock released a series of new investment products that specifically aim to exclude directing monies to the gun industry.

Despite the fiery debate and vocal advocacy, gun companies (Ruger and Smith & Wesson) and industry officials defend industry practices and maintain that the best way to prevent future tragedy would be better enforcement of existing laws.