Congressman: Ban 'assault weapons,' go after those who don't turn them in 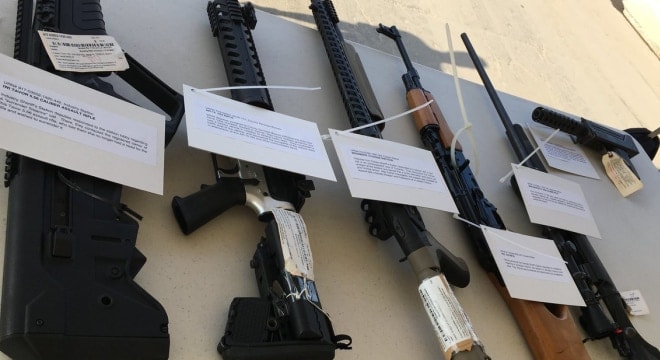 A California Democrat opined on Thursday that the fix for America’s gun issue involves a ban, a buyback, and criminal prosecution.

U.S. Rep. Eric Swalwell is a former Alameda County deputy district attorney and has represented the San Francisco area in Congress since 2013. In an op-ed published by USA Today on Thursday, Swallwell recalls an incident where he prosecuted the killer of a taco truck security guard, Gary Jackson, murdered by a man who ambushed him with an AK-style rifle.

“So Gary didn’t stand much chance,” says Swallwell. “First-graders and teachers in Newtown, Conn., didn’t either. Nor did dancers at the Pulse nightclub in Orlando, nor concert-goers in Las Vegas, nor teenagers at Marjory Stoneman Douglas High in Parkland, Fla., nor the people at the Waffle House outside Nashville. Like so many American mass-shooting victims in recent decades, their doom was all but assured by the murderer’s tool.”

The solution as advanced by the lawmaker who serves as the co-chair of the House Democratic Steering and Policy Committee: a ban on “military-style semiautomatic rifles” followed by a turn-in program funded by the federal government that he says could top $15 billion. For those who do not elect to sell the feds their firearm outlawed by such a ban, Swallwell says, “we should criminally prosecute any who choose to defy it by keeping their weapons.”

Swallwell, who says, “Australia got it right,” was an original co-sponsor of H.R. 5087, the Democrat-proposed federal assault weapon ban as well as a half-dozen other gun control bills, and has spoken often on the subject of gun violence in the House. In addition to the USA Today piece, The Guardian published a similar op-ed from the former prosecutor last October in the days following the Route 91 Harvest festival shooting in Las Vegas.