The Zore X is now available for 10-percent off for LEO and veterans. (Photo: Zore)

Gun-lock maker, Zore, just announced the launch of a new program created to offer discounts on the company’s gun lock to law enforcement, military and veterans.

Zore says the program will provide a 10-percent discount on the company’s Zore X gun lock.

“Those who serve and protect us deserve our respect and gratitude – not just in word but in action,” Bruno Escojido, CEO of Zore, said in a press release. “This program is a small token of our appreciation for their service and dedication to their fellow citizens and country. As a company founded by veterans, we believe in giving back to that community.”

The Zore X features a caliber specific cartridge-shaped lock that when placed in a gun’s chamber secures the firearm and prevents it from operating. The lock utilizes a combination style dial, known as the RAPIDial, that allows users to quickly unlock the gun when needed. 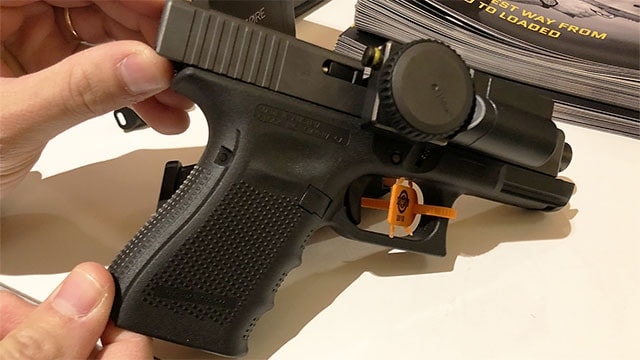 The Zore prevents the firearm from firing while in place. (Photo: Guns.com)

“As an early supporter of Zore, I’m proud that they’ve chosen to provide my fellow law enforcement officers and military personnel a discount on their products,” said Stephen Day of the Maine Police Department. “Law enforcement officers are responsible for keeping people safe, and a product like Zore, that can help keep kids safe from firearms in the home, is a must for any gun-owner, including off-duty police.”

Zore says it’s already sold “thousands of units” since the Zore X’s launch in January 2018. Available in 9mm, the company intends to launch .40 and .45 caliber versions in the near future.