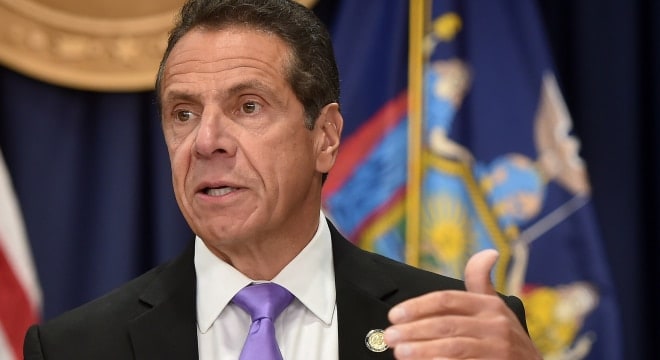 Gov. Andrew M. Cuomo, shown at an event earlier this week, now holds that the ammo regulations required by his landmark 2013 gun control package were not significant (Photo: Kevin Coughlin/Office of the Governor)

One of the aspects of Cuomo’s Secure Ammunition and Firearms Enforcement Act, namely a mandate for background checks for ammunition sales, was put on hold in 2014 after state police said they were unable to process the checks. The delay was later extended in an agreement with state lawmakers until a workable system to could be implemented. Now, Cuomo reportedly shrugged off the almost forgotten requirement when asked about it.

The Governor offered no explanation for the continued delay but told the Albany Times-Union that, when compared to the expansion of the state’s “assault weapon” ban, increased mental health screening in relation to legal gun possession and background check mandates, the ammo regulations were “not a significant aspect” of the SAFE Act.

Characterised as “the biggest significant unbuilt portion” of the gun package by the Times-Union, the database on ammo sales was one of the first in the country, predating California’s as-yet-to-be fully implemented Prop. 63 requirements which have caused heartburn for dealers, added fees and wait times for gun owners seeking to buy ammunition, and forced online retailers and small ammo makers to modify their practices to comply. Four states — Connecticut, Illinois, Massachusetts, and New Jersey — require firearms licenses for ammo sales but not background checks on each purchase.

Cuomo’s office touts that once an “appropriate technology is determined and evaluated” by the State Police, the system will move forward.

It is not the only portion of the SAFE Act that has proved to have teething problems. Earlier this year the State Police said they were pumping the brakes on confiscating weapons from thousands of New Yorkers who may have “unknowingly failed to recertify” handgun licenses after the law changed to add a five-year expiration date to the lifetime certification. The agency warns that assault weapons first registered under the act are now up for their first periodic recertification as well.

In addition, elements of the new law’s mental hygiene screening reports have been challenged by those who argue their guns were seized after routine procedures. As of December 2017, New York had 544,398 active records submitted to the FBI’s National Instant Criminal Background Check System for mental health issues, a number only surpassed by California and Pennsylvania.

Running a fierce race against progressive candidate Cynthia Nixon that is coming to a head in this week’s Democratic primary, Cuomo has been touting the SAFE Act as the “toughest” gun law in the country, a claim that was deemed “mostly false” by Politifact who points that laws in California, Connecticut, New Jersey, and others are rated as tougher by gun control advocates. Nonetheless, Cuomo is beating Nixon by a wide margin in most polling.