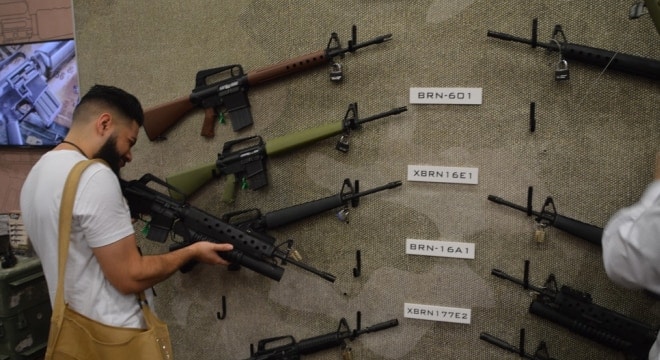 Numbers from the NSSF point to the likelihood that 16 million modern sporting rifles were produced between 1990 and 2016, a period that included the decade-long federal assault weapon ban. (Photo: Chris Eger)

The trade group for the firearms industry says that AR-15-style rifles and their competitors are among the most common in the country.

Figures researched by the National Shooting Sports Foundation show that just over 16 million semi-auto rifles such as AR-15s and AKs have been produced or imported into the country since 1990. Combing through figures from federal regulators and verifying the break out against companies who make selected semi-auto rifles with detachable magazines, termed modern sporting rifles by the industry, the group says guns like the AR and AK are white hot with consumers.

Keane explained the guns are popular in large part due to the inherent modularity of such platforms, which provide the ability to customize them to fit the individual owner and the wide variety of needs they can fulfill. “They are offered a wide variety of calibers and the design of the firearm allows beginners to quickly master safe and accurate marksmanship skills,” he said. “Modern sporting rifles are the choice for millions of Americans for hunting, recreational target shooting and self-defense.”

The estimate for 2016, working with the latest numbers available due which are stymied out of respect of industry confidentiality, are on par with 2013 figures — 2.3 million. For reference, U.S. manufacturers produced some 4.2 million rifles of all calibers and types in 2016.

The number of guns in circulation is a more ephemeral number as, while some have surely been scrapped, worn out, broken or otherwise retired, guns manufactured or imported before 1989 are not listed in the 16 million figure. Likewise, guns assembled from so-called “80 percent” lowers or kits by home builders are not tracked by the industry.

The debate over just how common ARs are has been a matter of legal contention at the federal level for several years.

In 2014, upholding Maryland’s strict new gun control laws, U.S. District Judge Catherine C. Blake ruled that AR-15 style rifles and others “fall outside Second Amendment protection as dangerous and unusual arms.” Blake went on to explain her reasoning that the then-estimated 8.2 million AR-15 and AK-47 based semi-automatic rifles known imported to or produced in the country between 1990 and 2012 represent “no more than 3 percent of the current civilian gun stock.” Even this, she maintained, was highly concentrated in an even smaller “1 percent” of the U.S. population.

In 2016, Blake’s ruling was reversed by a three-judge panel of the 4th U.S. Circuit Court of Appeals who held that the same figure of guns, coupled with an estimated 75 million magazines “are so common that they are standard” with Chief Judge William Byrd Traxler, Jr. going on to say, “In sum, semi-automatic rifles and LCMs [large capacity magazines] are commonly used for lawful purposes, and therefore come within the coverage of the Second Amendment.”

Nonetheless, Traxler’s ruling was later overturned by a rare en banc panel of the entire court which stood behind the ban in a 10-4 ruling that the Supreme Court declined to review further.

The same year that Maryland’s ban was upheld, U.S. Sen. Dianne Feinstein, D-Calif., grilled Supreme Court nominee Neil Gorsuch on if AR-15s were in common use, or could be restricted as unusual, in line with the 2008 Heller case.

“Do you agree with that statement that under the Second Amendment weapons that are most useful in military service, M16 rifles and the like, may be banned?” she asked the nominee.

Gorsuch replied, saying, “Heller makes clear the standard that we judges are supposed to apply. The questions is whether it’s a gun in common use for self-defense and that may be subject to reasonable regulation. That’s the test as I understand it. There’s lots of ongoing litigation about which weapons qualify under those standards and I can’t pre-judge that litigation.”

In the end, Feinstein concluded that “By arguing that AR-15s can’t be regulated, Brett Kavanaugh made crystal clear that he’s to the right of Justice Scalia on guns,” she said on social media after the hearing. “Even pro-gun Justice Scalia knew the 2nd Amendment did not protect all weapons in his opinion in Heller.”