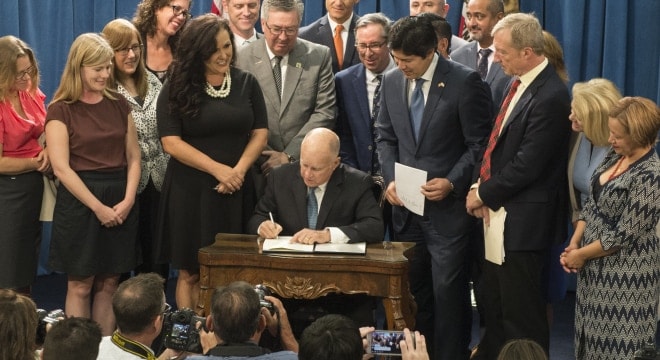 The Democrat on Friday signed bills to bar those aged 18-to-20 from buying firearms, expand gun seizure order laws and implement a variety of new lifetime bans on gun ownership. He also vetoed bills that would have banned gun shows at a state-owned facility, rationed shotgun and rifle sales to one gun a month, and cut out gun retailers from “buyback” programs.

The most contentious of the measures, SB 1100, bars firearm sales to those under 21 years of age. The move is similar to laws passed in Florida and Vermont this year, both of which have been challenged in court. A fiscal analysis of the measure estimates California would lose out on $2.2 million per year in mandatory dealer fees due to the decreased number of gun sales resulting from the proposed new laws. Nonetheless, the Assembly approved it 47-30 in August setting up a 26-12 Senate concurrence.

“I was determined to help California respond appropriately to the tragic events our country has recently faced on high school campuses,” said the bill’s sponsor, state Sen. Anthony J. Portantino, D–La Cañada. “I feel it is imperative that California leads when Washington refuses to act.”

Gun rights groups, who vigorously opposed the age increase and urged Brown to veto the measure, said in an email to Guns.com they are exploring legal options to fight to the new law. “Governor Brown just told millions of people under 21 that they can fight and die for our state and country with machine guns, but they can’t buy a gun for self-defense in their homes. That’s nuts,” said Craig DeLuz, spokesperson for the Firearms Policy Coalition.

Brown also approved AB 1968 and AB 3129, which adds to the list of lifetime bans on firearm ownership those individuals convicted of any misdemeanor domestic violence or those that have been admitted to a mental health facility more than once in a one-year period. The latter would trigger the removal of guns from someone placed on a 5150 hold in California twice in a one year period. Supported by the California State Sheriffs Association and gun control groups but opposed by gun rights organizations, the measure only picked up seven “no” votes during its legislative process.

Two measures expanding California’s gun violence restraining orders, SB 1200 and AB 2526, were signed into law by Brown. The moves will allow such orders to be issued verbally by courts in emergencies, speeding up the process to seize guns from those thought to be at risk to themselves or others, and mandate that gun magazines be part of the seizure as well.

Not all was bad news from Sacramento for gun owners last week as Brown, clearing his desk of the last of some 1,200 bills sent to his office by lawmakers this year, scuttled a move that would have banned gun shows at the state-controlled Cow Palace in Daly City. The historic venue has long been the location of numerous gun shows throughout the years, which has drawn the ire of Democrats from nearby San Francisco. Similar bills had been vetoed twice in the past decade.

“The decision on what kind of shows occur at the Cow Palace rests with the local board of directors which, incidentally, represents a broad cross-section of the community,” said Brown in his veto message.

A move to ration shotgun and rifle sales to one every 30 days, which is already the law with handguns in California, was similarly rejected by Brown. The long-term governor noted, “I vetoed a substantially similar bill in 2016, and my views have not changed.”

Just the District of Columbia, Maryland, and New Jersey have gun rationing laws on the books, but they, like California’s current statute, are directed at handguns only.

A final measure sunk by Brown, AB 1903, by Assemblywoman Lorena Gonzalez Fletcher, would mandate that gift cards and certificates given in gun buybacks can’t be issued by businesses that sell firearms or ammunition. Gonzalez Fletcher said that she saw Wal-Mart gift cards at a recent event in her area and called it “hypocritical and almost a waste of taxpayer dollars” to take in “old, often useless guns” for cards that can be used to buy new ones.

In his veto message on the bill, Brown said that he understood the intent behind it “but I do not believe local firearm buyback programs need to be micromanaged to this degree.”

The raft of legislation adds to five measures Brown processed earlier in September. Those included lending signatures to a bill making a firearms safety course of at least eight hours mandatory before a carry license could be issued, expands the state’s ban on bump stocks, and adding a mandate to register guns without serial numbers owned by newly-moved Californians. In turn, he rejected a measure paving the way for individuals to “86” their own gun rights as well as one to increase the pool of those who can seek GVROs to seize firearms.