The West German-made Erma ET22 was billed in the 1960s as inspired by the old Imperial “Navy” model Luger but centered more towards plinking and control of zee pests. (Photo: Richard Taylor/Guns.com)

From the wide range of options in the Guns.com Warehouse, we bring you a pair of curious West German-made long-barreled Erma ET-22s. But first, let’s talk about “Navy” Lugers

Austrian firearms inventor Georg Johann Luger invented both the 9mm round known and loved today, and, while tweaking a design from German gun industry giant DWM for a U.S. Army contract, came up with the Luger pistol that was to carry his name. A toggle-action semi-auto, the gun was first adopted by the Swiss Army and then, in 1904, by the Imperial German Navy, well before the pistol went on to its greatest claim to fame as the standard sidearm of the German Army in World War I. 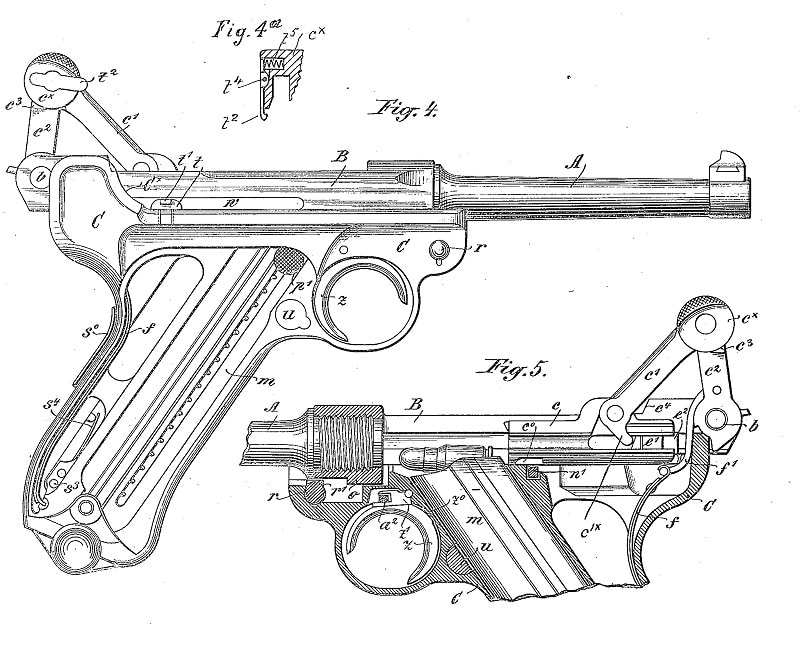 While the German P08 Luger carried a 3.9-inch barrel, the guns carried by that country’s sea service were more distinctive, with a longer 6-inch barrel, the ability to use a wooden buttstock that attached to the rear of the grip, and a rear sight calibrated for an optimistic 200 meters. Similar to the Navy Lugers were DWM’s line of Luger Carbines made for the commercial market, which included an 11.85-inch barrel, a 300m sight, and a take-down wooden forearm. Both of Navy Lugers and Carbines are highly sought after by collectors today due to their rarity with prices for each starting at about $3,000 for the former and $8,500 for the latter.

Lugers went out of production in Germany with the end of World War II in 1945, ensuring their numbers would never grow larger. However, rather than die-off, the iconic Central European pistol went on to generate its own oxygen in its own sense, growing in popularity over the years. That’s where a company by the name of Erma-Werke comes in. 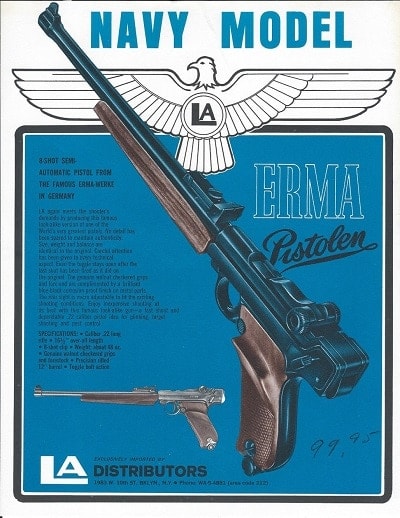 A 1960s ad by LA Distributors for the “Navy Model” Erma Pistolen, the ET22

Founded in 1922 in the town of Erfurt by Berthold Geipel, Erma made the famous StG44 Sturmgewehr and MP38 sub guns during WWII until the factory was destroyed by British aircraft. Moving to Bavaria, in 1949 Geipel rebooted Erma outside of Munich and took to both repairing U.S.-loaned M1 Carbines used by German police forces and creating a .22LR version of the handy rifle for training. Going commercial with their M1-22 rifle in the 1960s, Erma began exporting guns to U.S. distributors.

In 1964, capitalizing on the now-open door to the States, the company introduced their LA22 pistol, an eight-shot .22LR semi-auto with similar styling as the Luger, brought into the U.S. by LA Distributors in Brooklyn. Then, in 1967, Erma took it to the next level by making a salute to the Navy Luger.

With an 11.75-inch barrel, the Erma-Werke ET22 went 16.5-inches overall and featured walnut checkered grips and a forestock like the Luger Carbine. A micro-adjustable rear sight was ahead of the action rather than at the rear of the pistol.

“Enjoy inexpensive shooting at its best with this famous look-alike gun– a fast shoot and dependable .22-caliber pistol idea for plinking, target shooting and pest control,” said a vintage ad from LA Distributors for the Navy Model Erma. 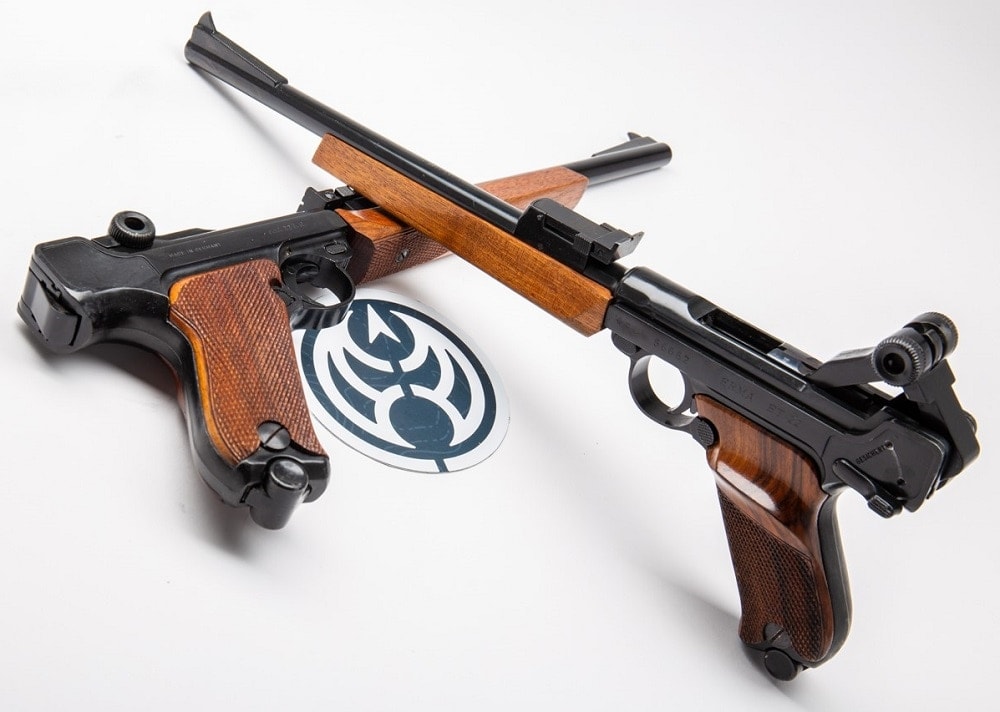 Georg Luger’s famous toggle-action locks open on the last round, although internals are different from standard .30-cal and 9mm Lugers. (Photo: Richard Taylor/Guns.com)

While the P04/14 Navy Lugers did not have a forearm and the Luger Carbines featured checkering on theirs, the long forward furniture on the Erma ET22 came smooth. (Photo: Richard Taylor/Guns.com)

The guns used a large target front blade sight with a ramp and an adjustable rear. 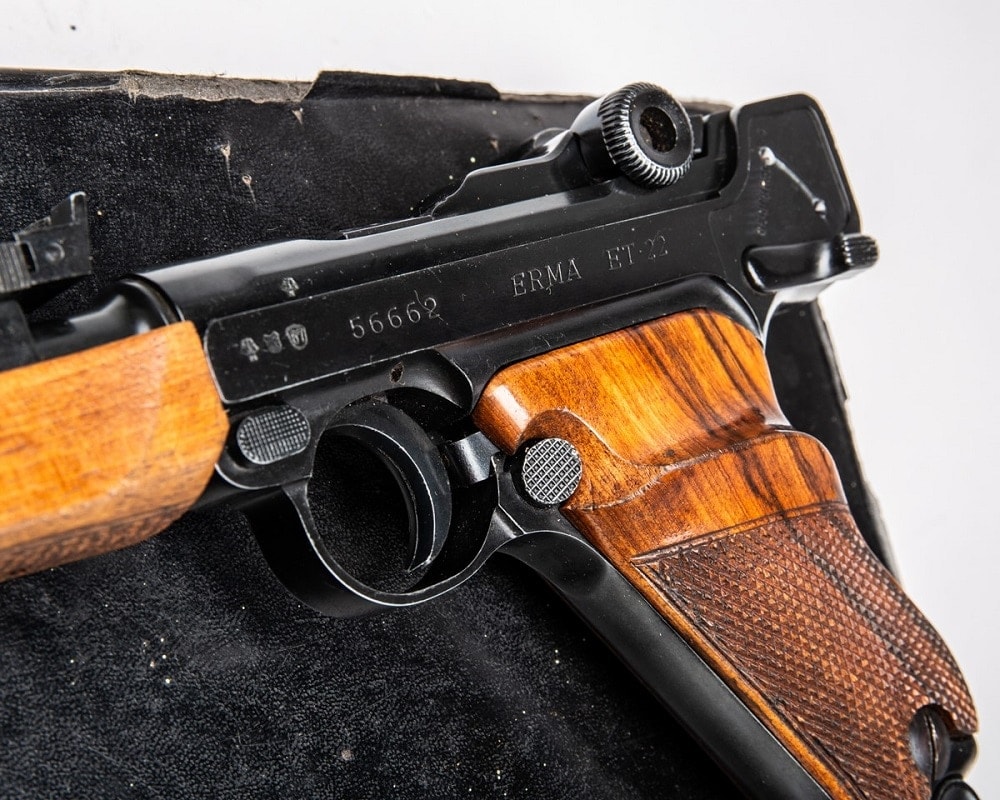 Erma-Werke started the ET22 line with serial numbers in the 51,000-range. The three symbols in this photo on the frame above the trigger denote the gun was Nitro-proofed in Munich in 1967. (Photo: Richard Taylor/Guns.com)

Described as “scarce” and “rarely seen” by firearm collectors, the Erma ET22 isn’t quite as hard to find as the old Lugers it is based on but is still far from common. Guns.com talked to Holger Schlemeier, the German gun writer who literally wrote the book on the post-WWII Erma factory and its wares (which will hopefully be available in English soon) and he explained that the guns were not made in great quantity. 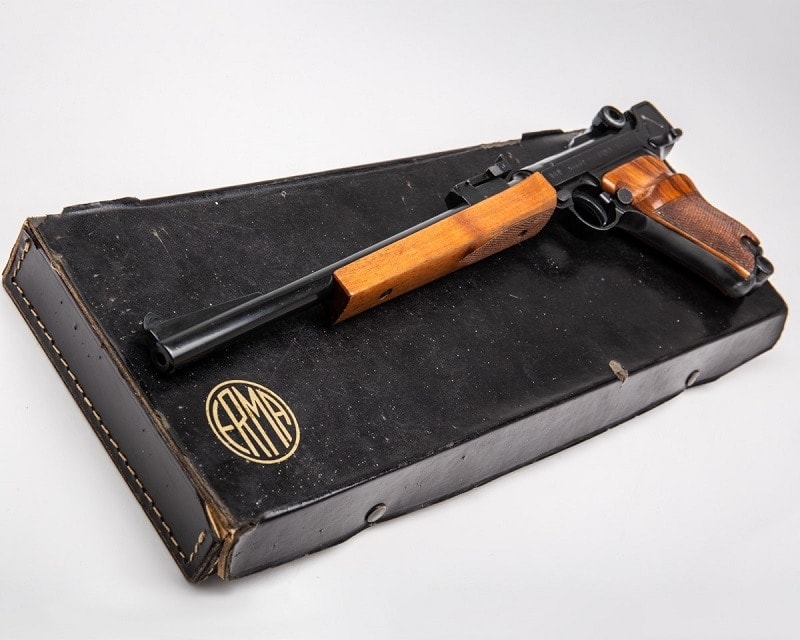 As for Erma-Werke, they went on to produce other Luger variants in .32 ACP and .380-caliber as well as series of high-end revolvers and sport match pistols before going out of business in 1997, their assets picked up by Erma Suhl, a company which in turn closed its doors in 2004.

In the end, their ET22s could end up being one of their most enduring and interesting offerings. 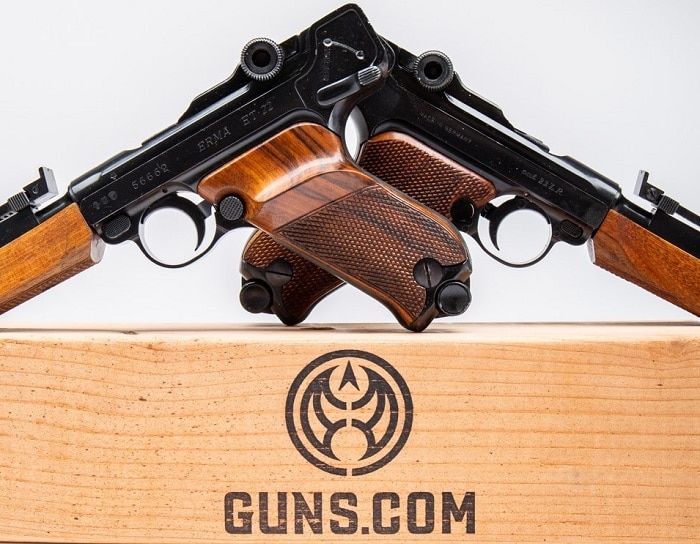