For either traditionalists — or more likely, the number of states that still disallow centerfire rifles for hunting — shotguns, muzzleloaders, and handguns have been the norm. But now, with those same states allowing the use of straight wall cartridges for hunting, the new Traditions Outfitter G2 rifle and its cool lineup of chamberings will have a ready market this season.

The Outfitter G2 is a single-shot, break action centerfire rifle built and marketed for deer and other big-game hunters. Each wears a 22 inch chromoly Lothar Walther fluted barrel. Of specific interest, the G2 and its straight walled chamberings can be used during the centerfire-limited seasons of Michigan, Ohio, and Indiana. Safety is high on Traditions list here, with both transfer bar and manual trigger/hammer block safeties. All come drilled and tapped.

The rifle is built for practicality and all-weather use with a steel frame, Cerakote finish on the metalwork and synthetic stocks. The rifles are light at only 5.8 pounds bare, though potential recoil is mitigated by a thick rubber butt pad and larger calibers coming with a muzzle brake. 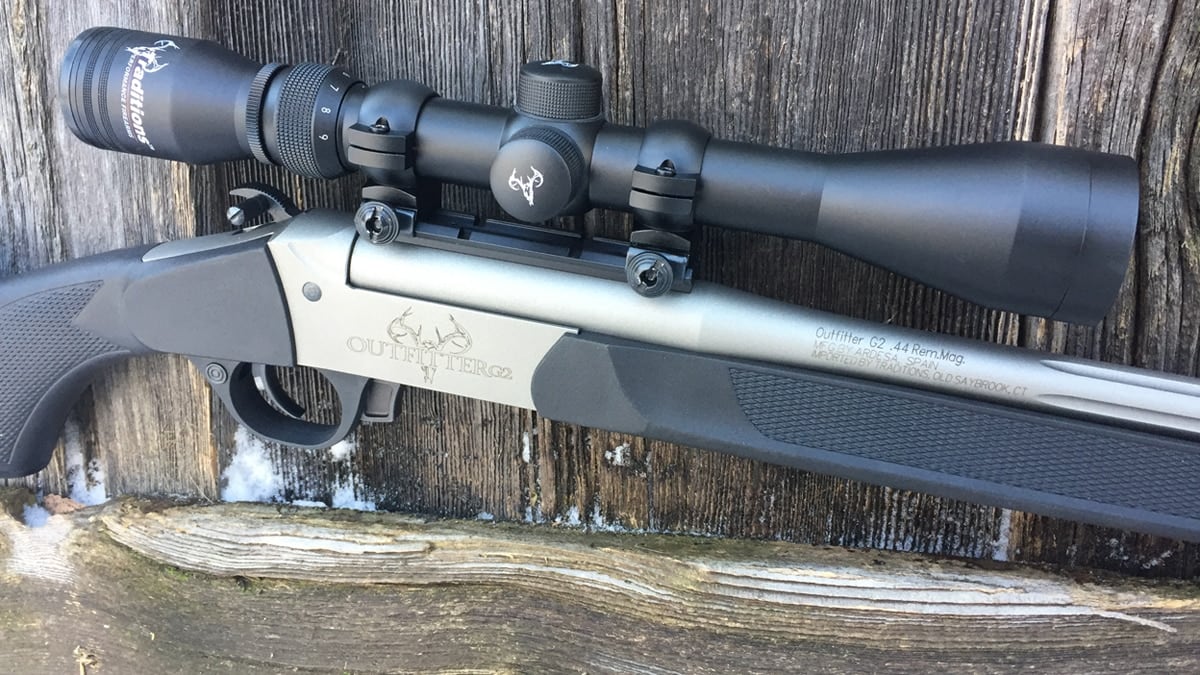 The Outfitter G2 is a single-shot, break action centerfire rifle built and marketed for deer and other big-game hunters. (Photo: Kristin Alberts/Guns.com)

Our test Outfitter G2 came in the .44 Magnum scoped combo, meaning the rifle was topped with a 3-9×40 optic and packed in a nicely padded soft case emblazoned with the Traditions logo. At only 37.5 inches in length and 14.5 inch LOP, the gun is built for adults, but its compact length is popular with smaller-framed shooters as well.  It’s a lightweight and maneuverable gun for the thick brush or adverse hunting conditions. Partner that with light recoiling calibers like our .44 Mag or the .357 along with the double safety system, and this is a rifle that new shooters can learn and grow with.

We headed to the range in advance of deer season with a nice mix of the same ammunition we’d use for whitetails: Hornady XTP, Winchester Soft Point, Hornady XTP, and Hornady 225-grain FTX LeveRevolution.

Given the nature of calibers like the .44 Magnum, we started out and sighted in at closer ranges than normal. With a zero at 50, we were able to easily reach out to 100 yards. Our best three shot group at 50 yards was 0.70-inches. Best three shot group at 100 yards measured 1.10-inches. The Outfitter G2 is more than capable of taking down deer at ranges trumping most handguns, muzzleloaders and shotguns used in the limited states. Taking a step up in caliber from the .44 Mag to, say, .45-70 would open up ranges with even greater downrange energy. 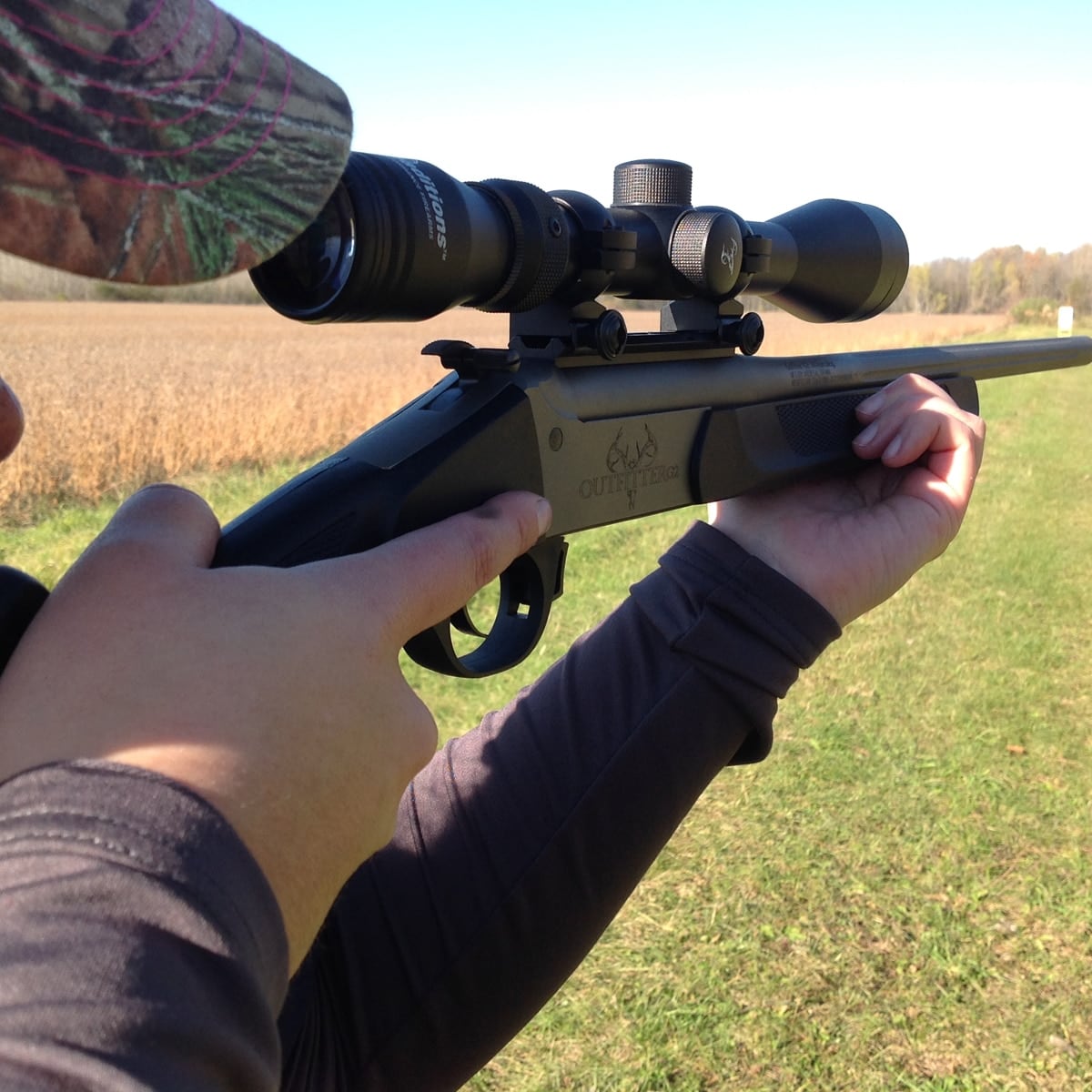 The Outfitter G2 is more than capable of taking down deer at ranges trumping most handguns, muzzleloaders and shotguns used in the limited states. (Photo: Kristin Alberts/Guns.com)

Though the LeveRevolution is so named for its penchant for excellence in the magazine tubes of lever actions, the rounds plain perform, and did just that in the G2. Our top groups were all shot with the LeveRevolution. Though we expected the trigger to be less than exciting, it was in fact breaking quite clean and crisp.

The molded checkering on the synthetic stocks, while plain, gets the job done. There’s an eleven-degree target crown on the barrel.  The .44 Mag barrel wears a 1:20 inch rate of twist. Larger calibers like the .35 Whelen, .45-70, and .450 Bushmaster come topped with a recoil-reducing muzzle brake.  While our .44 Mag does not, it certainly does not need it. Recoil was incredibly manageable, even launching heavier hunting bullets from the .44 Magnum. 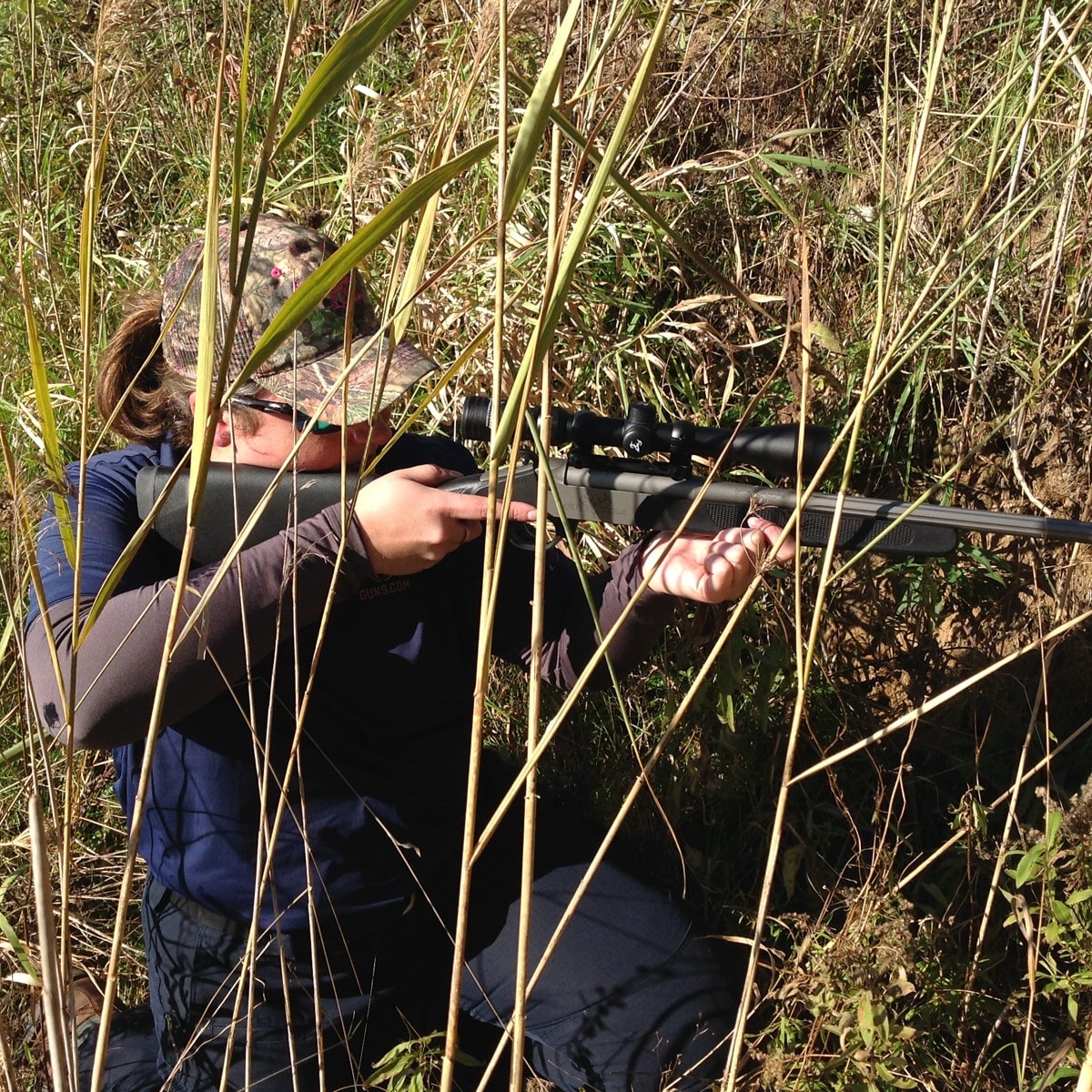 While we were pleasantly surprised overall with the balance, accuracy, and performance of the budget-minded Outfitter G2, the rifle could have taken one giant leap forward with a superior trigger. (Photo: Kristin Alberts/Guns.com)

The Outfitter G2’s break action is actuated by depressing the pad at the front of the trigger guard. Everything functions well and locks up tight. Sling swivels come standard, and our test rifle with the optic came with a hammer extension as well, which is nice for cocking and clearing the optic with ease.

Sans ejectors, spent casings are pulled from the chamber with the extractor, far enough to grab with bare fingers, and just a tad more tricky with bulky gloves. The rifle balances well overall and its short length lends to its wieldy feel for the mobile hunter or brush-buster. The included 3-9×40 Traditions-branded scope is basic with a one-inch tube and duplex reticle, but again, gets the job done.  There’s no MOA guarantee or fancy finish work, but the G2 is affordable and more than accurate enough to take down deer within the ranges of all the straight wall chamberings.

The new Outfitter G2 is pure blue-collar utilitarian. With the combination of steel, Cerakote, synthetic, and big game hunting-specific chamberings, this gun begs to be worked in the woods. It may be a simple break action single shot, but it’s a capable hunting companion.